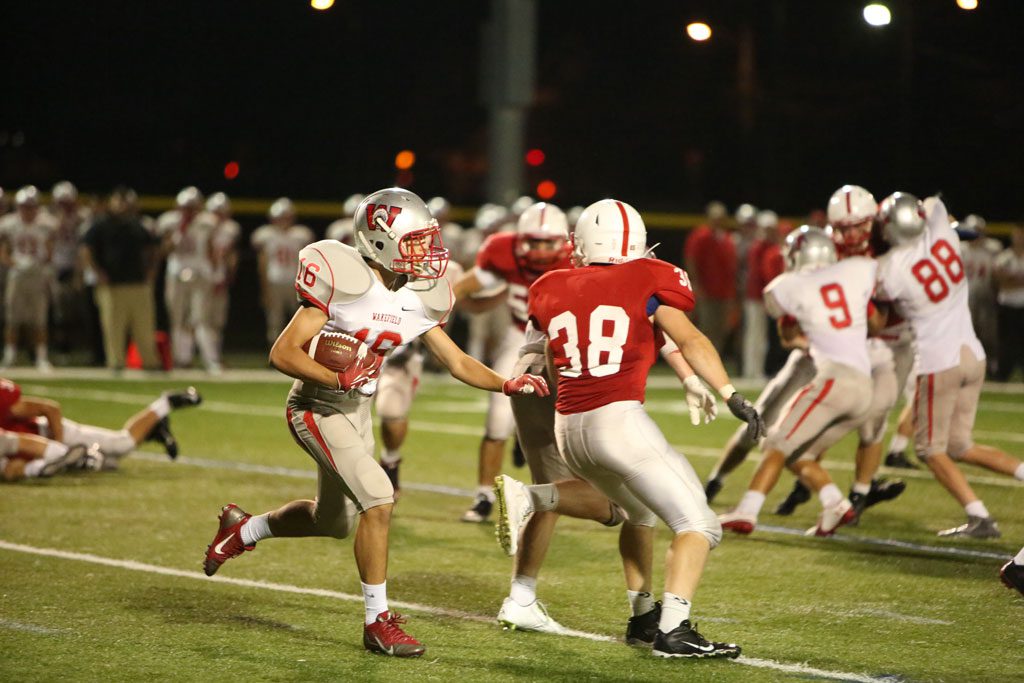 CARMEN SORRENTINO, a sophomore #16, returns a kickoff against Melrose from Wakefield’s game against the Red Raiders two weeks ago. The Warriors are hoping a return to Landrigan Field will help them end a two-game losing streak. (Donna Larsson File Photo)

WAKEFIELD — The Wakefield Memorial High football team has lost two straight Middlesex League Freedom division games and has been on the road for three straight contests. The Warriors are hoping a return to the friendly confines of Landrigan Field will help cure what has been ailing them.

However Wakefield’s opponent won’t be an easy one as it hosts Wilmington tomorrow night at 7 p.m. at Landrigan Field. It will be the first of three consecutive home games for the Warriors.

“We want to have a good stretch,” said Coach Mike Boyages. “Watertown was a long trip and it is good to be back home for three straight home games. Wilmington is having a good year. The playoff format is different now and we’ve talked to the kids about that. There are 11 teams in our division (Div. 3 Northwest) and there are eight qualifiers. So we have a good chance to make the playoffs but we really have to play better.”

The Warriors had trouble, particularly on the defensive side of the football, against Watertown and star QB Nick Giordano. Wilmington and then Stoneham next week present very different challenges for the Warriors.

“Watertown is an exceptional team,” said Boyages. “Wilmington and Stoneham, not to look too far ahead, both have more of a power offense. Their quarterbacks aren’t really mobile guys like we have faced with the spread offenses. They run more of a two tight end and wing-T formations. They make few mistakes and they throw an occasional pass out of play action to keep you honest.”

Senior fullback Matt Penney returns as Wilmington’s leading rusher from a season ago. The leader on the offensive and defensive lines is senior tackle James Hill.

After surrendering 35 points to Lexington and 40 against Watertown, the Warriors are seeking to have a better effort defensively.

“We made adjustments against Watertown and we’ll have to change that for more of a power offense,” said Boyages. “We also have made some personnel changes.”

The Warriors lost in overtime against Lexington and by two points against Melrose. However against Watertown, Wakefield dug itself a hole early and could never catch the undefeated Red Raiders.

“I thought we played well enough to win against Lexington and Melrose,” said Boyages. “Watertown has terrific ability but we also made too many mistakes. I’m hoping we come out like the Patriots did last Sunday after losing to Kansas City with the same emotion. We (the coaches) try to do the best we can but the emotion really needs to come from the players. Our intensity and mental focus are two things we have been concentrating on.”

One thing Wakefield has going for it is that it has never lost to Wilmington in the three seasons the Wildcats have been in the Middlesex League. The Warriors have posted 35-7, 22-0 and 17-3 victories the past three years and they would like to make it a perfect 4-0 against one of the league’s newest members.