Warriors seek first victory against Red Raiders since the 2012 season 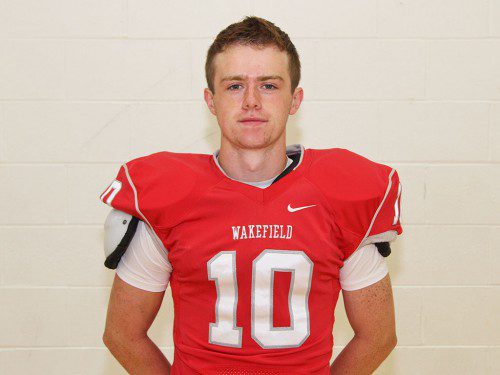 SENIOR QB/DB Ned Buckley was named the Daily Item Football Player of the Week for his effort in Wakefield’s non-league game against Abington last Friday night in Abington. Buckley returned an interception 79 yards for Wakefield’s lone TD of the game. At QB, Buckley completed five of seven passes for 43 yards and rushed for 12 yards. (Donna Larsson Photo)

WAKEFIELD — There was a time that the Wakefield Memorial High football team had posted 23 straight wins over Middlesex League rival Watertown and dominated the series against the Red Raiders. Now, the Warriors will be seeking to put an end to a two-game losing streak against their M.L. Freedom division rival.

Wakefield will also be seeking to earn its first victory of the 2015 season when it hosts the Red Raiders in the Freedom division opener tomorrow night at Landrigan Field.

Wakefield is off to an 0-2 with losses to Beverly and Abington while Watertown is 2-0 after wins over Arlington Catholic and Mt. Pleasant.

“We scheduled those games against Beverly and Abington to help prepare for Watertown and our league games,” said Head Coach Steve Cummings. “We thought those games would help us. We wanted to play the toughest opponents we could find and aggressively looked to schedule those games.

“We’re 0-2, but we got a ton out of those games. We were able to come out and compete against good competition and we had a lot of growth in those two games,” added Cummings. “We thought that would show us where we needed to be get better instead of playing lesser teams and thinking we were better than we were.”

Cummings is hoping the level of competition has prepared the Warriors to play in one of the better leagues around. The first year head coach is also hoping that Wakefield will be prepared to play the defending M.L. Freedom division champion Red Raiders.

Watertown has gone from the spread and I-formations it ran last year and is running the triple option.

“Watertown runs the triple option. They have a good quarterback who was their JV quarterback a year ago,” said Cummings. “They run the triple option like Georgia Tech and Air Force. They go with some double wing with a wingback and have a lead blocker come in motion on some plays to change it up. Teams can try to get their guys ready to face it but it is almost impossible to replicate the speed of it in practice.

“We have to do our best to hold our own. It takes about a quarter and a half to get the execution of it down,” continued Cummings. “Watertown has some good athletes and their quarterback has a great arm. We need to stay focused. They’ll run, run and then throw the ball. Our secondary needs to be aware in our coverages. It’s a tough offense to stop. We want to get the ball out of the quarterback’s hands. If he is able to run with it, we’ll be in trouble.”

While the Red Raiders present a challenge, Wakefield is also seeking improvement itself on both sides of the ball. On offense, the Warriors are looking to finish drives with touchdowns. On defense, Wakefield seeks to be more consistent and not let up big plays.

“Finishing has been a big point of emphasis. Two times we moved the ball and had a great drive. But we when we got to the 20, both times we turned the ball over. They’re weren’t forced mistakes, but self inflicted ones. We gave the ball away,” said Cummings. “We need to do a better job on that part of the field. We have to get better and scoring points. That’s the name of the game.

“Defensively, we need to finish particularly on third down and long,” continued Cummings. “Teams have been converting and continuing drives. We need to get them off the field.”

Cummings feels that the Warriors need to play a complete game of football the entire 44 minutes to prevail against any team.

“It is special to be playing at home and it will be the last time for a while,” said Cummings. “We want to come and play inspired football. We have also reminded the kids about last year’s game over there. We were sloppy and they beat us. They’re also the defending league champs. They’re a good football team.