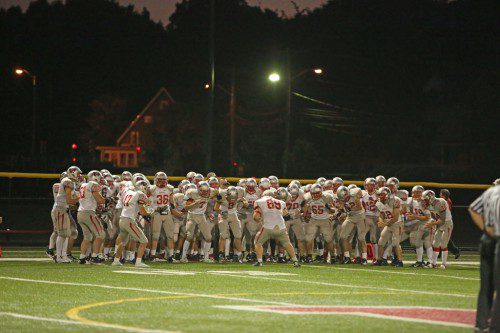 WATERTOWN — Are you ready for some Thursday night football?

So there are a full slate of M.L. contests with one of those being tonight at 7 p.m. when the Wakefield Memorial High football team takes on Watertown in a M.L. Freedom division contest at Victory Field.

Wakefield will also be playing at Victory Field for the first since Watertown put in a new turf field. The last time the Warriors were the road team against Watertown, the contest was played in Arlington due to Victory Field not being quite ready. That game was in 2011.

So Wakefield would like to avoid a two-game losing streak against the Red Raiders. Also, the Warriors need a victory to stay in the race for the M.L. Freedom division championship.

“We’ve been over there to scout them,” said Coach Mike Boyages. “They have made a nice improvement to the stadium. Watertown is 3-0 and a very good team. We exchanged tapes with them for the past two games.”

The Warriors saw Watertown’s victory against Shawsheen Tech and last week’s 29-14 triumph over Stoneham in the M.L. Freedom division opener.

“Overall, Watertown is very well coached and they have some good skill players,” said Boyages. “They’re a very good program and their coach (John Cacace) has done a nice job. They beat us last year to end our long winning streak. This is a big game for us. We need to win them all.”

Watertown is led by senior quarterback Nick Giordano who threw for over 1,800 yards last year with 17 passing touchdowns. He also is also a dual threat as he rushed over 500 yards and had four rushing TDs.

Austin Farry, a senior, returns at running back and had 1,200 all purpose yards.

“Giordano and Farry are their top two players and they had a great game against us last year,” said Boyages. “It was interesting that we saw Watertown play Stoneham. Stoneham runs the power game with the two tight ends like we do and it was interesting to see how Watertown handled it.”

In last year’s game, Giordano completed 10 of 16 passes for 116 yards and one touchdown while Farry had six receptions for 68 yards.

The Warriors are coming off a loss against Melrose in which they staged a dramatic comeback to nearly pull the game out. Wakefield is also fairly healthy with a couple of exceptions.

“We’re as healthy as we’ve been. In the two games we lost, a break or two here or there and we could be 3-0,” said Boyages. “Last year we got off to a good start before the injury bug hit us. Right now, we’re pretty healthy. Basically, we had a good effort against Melrose last week. We do have some inexperience.

“We made some defensive adjustments and I thought we did a pretty good job against Melrose. We didn’t make many mistakes,” continued Boyages. “We also showed that we can throw the ball. I think that will make us more multi-dimensional. If we struggle with the full house backfield, we can go with a multiple receiver set.”

Senior QB Anthony Cecere threw for 198 yards and one TD as Wakefield erased a 17-0 deficit late in the fourth quarter and lost by two points, 17-15.

This is also the third straight road contest for the Warriors. They are 1-1 in the first two games and would like to end their road record for the regular season with a winning mark. They also want to get their first M.L. Freedom division win.