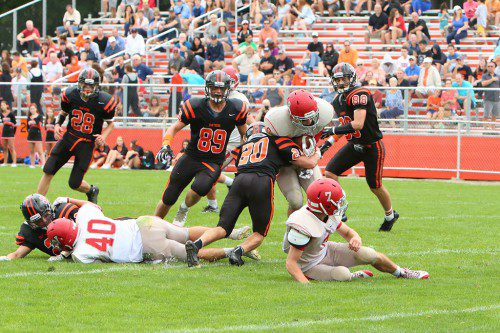 SENIOR RB Joe Marinaccio gets wrapped up by Beverly’s Sam Abate (#20) last Saturday afternoon. The Warriors will be hoping for a better result when they take on Marblehead tomorrow night in the home opener at Landrigan Field. (Donna Larsson Photo)

WAKEFIELD — The last time the Wakefield Memorial High football team played Marblehead was in the 2011 Div. 2A semifinals and the Warriors edged the Magicians by a 7-6 score in a hard fought contest.

While tomorrow night’s game doesn’t have the same implications, the non-league matchup will be a tough one for the Warriors. Kickoff is at 7 p.m. at Landrigan Field.

Wakefield will be seeking to have a better performance than it did a week ago when it lost to Beverly by a 24-0 score. Getting a win, however, will be tough against a Marblehead team that ripped Walpole, 27-0, in its opener last week.

Marblehead, like Beverly, plays in the Northeastern Conference and traditionally is a strong program. The Warriors will have their hands full against another good non-league opponent and they know the Magicians will be a tough team to beat.

Marblehead has been the NEC champs the past three seasons and are going for a fourth straight league title. They were also league champs in ‘09 and ‘11.

Marblehead outgained the Rebels in total yards, 387-119, last Friday night with 212 of those yards coming on the ground and 176 through the air. So Wakefield’s defense will need to be prepared to stop a team that can run or throw the ball with proficiency.

The Magicians are led by senior QB Drew Gally completed 17 out of 27 passes for 176 yards with two touchdowns and one interception. He also carried the ball nine times for 38 yards.

Leading the way running the ball for Marblehead was senior RB Jason Lopez who carried the ball 14 times for 91 yards with one touchdown. He also caught a TD pass as he had three receptions for 40 yards.

Another running back, senior Harry Craig rushed for one touchdown and caught a TD pass from Gally. Craig ran for 77 yards on five carries and he had seven receptions for 43 yards.

Head Coach Jim Rudloff is a veteran and he coached some good Marblehead teams. In fact, he was the head coach in ‘11 in the playoff game against Wakefield.

While the offense certainly did its part against Walpole, Marblehead’s defense held the Rebels to just 53 yards and made life difficult for QBs Charles Auditore and Brett Lavanchy. Auditore did complete 11 out of 16 passes for 134 yard with one interception.

The Warriors gained 90 total yards last week against Beverly and surrendered 257 yards. Wakefield will need to do a better job of sustaining drives and stopping Marblehead’s drives. The Panthers had the ball the majority of the first half last Saturday and built up a 17-0 lead.

Wakefield did do a better job in the second half against the Panthers on defense holding them to seven points late in the fourth quarter. But the Warriors were unable to find the end zone themselves and are seeking their first points of the season.

Wakefield also wants to cut down on the mistakes. While turnovers didn’t plague the Warriors last week until late in the game when they were forcing the issue, there were several blunders on specials teams and some untimely penalties that Wakefield will need to avoid this week if it hopes to prevail.