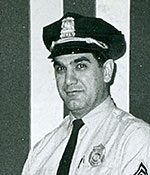 Born in Winchester on April 22, 1927, he was the son of the late John and Ermelinda (Macinanti) Bucci.

Mr. Bucci was a graduate of Winchester High School, Class of 1945. He was a retired lieutenant from the Wakefield Police Department. Mr. Bucci was a World War II Army veteran.

He was a member of the Winchester Sons of Italy.

Mr. Bucci was an avid golfer and had enjoyed hunting, fishing, watching the Red Sox and football.

He was the beloved husband of 62½ years of marriage to the late Louise C. (Cancian) Bucci. Mr. Bucci is survived by his four loving children: Linda Pelissier and her husband Roger of Stoneham, John Bucci and his wife Mary Jane Bucci of Tewksbury, Karen Eno and her husband Tom, and Sandy Teixeira and her husband Dave, all of Wakefield; his nine adoring grandchildren: James, Mark, Neil, Joel, Jason, Joseph, Dan, Michelle and Derek, and his four great-grandchildren. He was predeceased by his son Charles “Charlie” Bucci; his two sisters Marjorie Conti and Minnie Cuoco; and his two brothers Joseph Bucci and Richard Bucci. Mr. Bucci is also survived by many nieces and nephews.

His funeral Mass will be celebrated in St. Patrick’s Church,
71 Central St., Stoneham on
Saturday at 10 a.m.

Visitation for relatives and friends will be held at the McDonald Funeral Home, 19 Yale Ave., Wakefield prior to the Mass from
8 a.m. to 9:30 a.m.

Interment will be at Forest Glade Cemetery in Wakefield.