Warriors fail to cash in on Red Raider turnovers, blanked 21-0 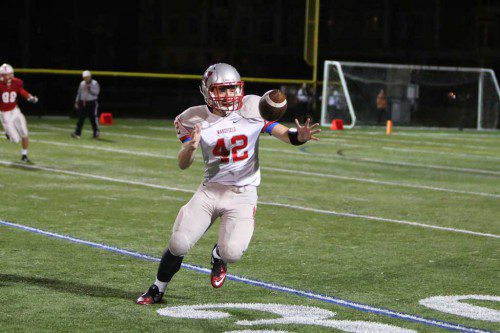 Unfortunately for the Warriors that didn’t help them win the game as they were blanked by the undefeated Red Raiders by a 21-0 tally to have their playoff run come to an end.

While Wakefield intercepted two passes and recovered a fumble, it was unable to convert any of the turnovers into points as it had just 86 total yards.

Meanwhile Melrose gained 324 yards of total offense with 249 yards on the ground and 75 through the air. The Red Raiders were far from perfect, but they were good enough on Friday night.

Leading the way was junior RB Mike Pedrini who rushed for 128 yards on 23 carries with two touchdowns.

Melrose (8-0) will face fourth-seeded Wayland (6-2) in a Div. 3 Northwest semifinal contest on Friday night at 7 p.m. at Green Field. Wayland routed Arlington, 41-7, in a quarterfinal on Friday night.

Wakefield (2-6), meanwhile, will face Arlington (5-3) in a Div. 3 Northwest consolation game on Friday night at 7 p.m. at Landrigan Field.

It is the second straight year that the Red Raiders have ended the Warriors’ run in the playoffs in the quarterfinals at Green Field. In fact, since the new playoff format has been in place, Wakefield has yet to win a postseason game. In 2013, the Warriors were defeated by Woburn in a quarterfinal game at Landrigan Field.

The Warriors had trouble moving the ball against the Red Raiders defense. Wakefield was unable to sustain any kind of running game as it had just six net yards rushing as a team. Through the air senior QB Ned Buckley completed four of 17 passes for 80 yards. But Buckley was also sacked five times.

“They’re a very good football team,” said Coach Steve Cummings. “Defensively they don’t do a lot but what they do they do really well. Their defensive line has great technique, their linebackers flow to the ball and their defensive backs cover a lot of ground and they close on the ball very quickly.”

Offensively Pedrini led the way for Melrose but senior RB Jay Tyler gained 72 yards on 10 carries and senior QB Julian Nyland rushed for 46 yards on 10 carries. Through the air, Nyland completed five of 12 passes for 75 yards and a touchdown. He was also intercepted twice.

“They essentially have three running backs (including the quarterback) that can hurt you,” said Cummings. “They’re hard to get down on first contact and they grind out the extra yards.”

Defensively for the Warriors senior DB Tighe Beck led the way with nine tackles while senior LB Zack Kane had seven tackles and an interception. Junior DB Carmen Sorrentino also had an interception and Buckley recovered a fumble.

Wakefield got the ball first to start the game and went three and out with two incomplete passes and a two yard run by Buckley.

Melrose began its first possession at its own 36 and proceeded to move the ball into the red zone.

Tyler and Pedrini had runs of four yards and seven yards on a first down. On a first down and 10 play from its own 47, Nyland faked the handoff and kept the ball himself and appeared to have a 53-yard TD jaunt. But the fake was so good even one of the officials was fooled and blew an inadvertent whistle. As a result the TD was called back and Melrose had a first down at the Warrior 41 after a 12 yard gain by Nyland.

Tyler had a five yard gain and Pedrini ran for six yards. A facemask penalty on Wakefield resulted in a first down at the Warrior 15. Pedrini gained a yard on first down, but on second down, the junior fumbled the ball as Buckley recovered as Wakefield took over at its own 24.

Wakefield went three and out and the Red Raiders took possession at their own 47 for their second series of downs. Melrose didn’t turn over the ball this time as it scored in five plays.

Nyland gained four yards before Pedrini ripped off a 15 yard gain and Tyler ran ahead for 19 yards. After Tyler was stopped for no gain, Pedrini ran the ball into the end zone from 15 yards out on a second down and 10 play for the TD.

Mike Cusolito added the extra point to give Melrose a 7-0 lead with 4:33 remaining in the first quarter.

Wakefield picked up its initial first down on its next drive as junior WR Pat Leary made a 14 yard reception on a third down and three play to bring the ball out to the Warrior 48. But the Warriors had two rushes which resulted in negative yardage as they eventually punted the ball away.

Melrose was hurt by a 15 yard unsportsmanlike conduct penalty on its next possession after the completion of a play which resulted in a long yardage. The Red Raiders punted the ball away to start the second quarter.

From the Wakefield 30, Kane gained four yards and senior RB Paul McGunigle ran for three yards setting up a third down and three play. But an incompletion resulted in Wakefield punting the ball away.

“We had second down and sevens and third down and threes but couldn’t pick up first downs,” said Cummings. “Melrose had that extra gear. Hats off to them. They make you go out and earn every yard.”

The Red Raiders scored their second touchdown of the night as they sustained a 10 play drive which started at their own 34.

Nyland had an incompletion on first down and Pedrini gained three yards on second down. On third down a bad snap resulted in Nyland covering up the loose ball for a three yard loss which set up a fourth down and 10 play from the Wakefield 35. Nyland found senior WR Ryan Censullo down the left side wide open with a pass which was good for 35 yards and a TD as Censullo beat the defense to the left corner of the end zone.

“On the fourth down play, the kid ran a great route and caught a great pass,” said Cummings.

Wakefield moved the ball into Melrose territory late in the second quarter on its final series of the first half. Starting at its own 37 after a 31 yard kickoff return by Joe Marinaccio, Kane gained four yards and McGunigle ran the ball ahead for nine yards for a first down. Kane had a three yard gain and McGunigle was stopped for no gain setting up a third down and seven play. Buckley found Beck with a 10 yard pass on the right side for a first down at the Melrose 37.

Buckley then threw three straight incompletions with one intended for Leary and and the other to senior RB Alex Jancsy on a screen pass. On fourth down and 10 from the Red Raider 37, Wakefield elected to punt as it trailed 14-0 at halftime.

Melrose received the third quarter kickoff to start the second half and scored in five plays despite two false start penalties and a fumble.

Starting at their own 40 after an onside kick by Wakefield, Pedrini ripped off a 10 yard gain to midfield. After a false start penalty, Pedrini gained eight yards. Tyler then scampered ahead for 30 yards to the Warrior 17. After a false start penalty and a personal foul penalty on Wakefield, Melrose had a first down and goal from the Warrior nine.

A fumble resulted in Nyland losing eight yards on first down. That didn’t deter Melrose as Pedrini scored from 17 yards out on the very next play. Cusolito kicked his third extra point of the night to give the Red Raiders a 21-0 lead with 8:14 remaining in the third quarter.

Wakefield, from its own 31 yard line, picked up a first down as senior TE Mike Moran caught a 27 yard pass. A 15 yard facemask penalty on Melrose resulted in a first down at the Red Raider 27. But after a four yard gain by Kane, Buckley was sacked twice on back-to-back plays by Jaret Botelho and Brian Mercer as the Warriors punted the ball down to the Melrose one.

Nyland gained two yards on first down and had an incompletion on second down. Pedrini gained nine yards on third down so Melrose didn’t have to punt from its own end zone. Pedrini caught a 20 yard pass from Nyland on a third down and eight play from the 14 which moved the chains once gain. But two plays later, Nyland’s pass was intercepted by Sorrentino at the Red Raider 45.

After a drop down the left side on first down, Beck hauled in a 29 yard pass to bring the ball into the red zone with Wakefield’s deepest penetration into Melrose territory as it had a first down at the 16. But Buckley had an incompletion and then was sacked by Cam Hickey for a two yard loss on the final play of the third quarter.

On the first play of the fourth quarter, Buckley was sacked for a 10 yard loss on third own by Hickey again resulting in a fourth down and 22 from the Melrose 28. Buckley’s fourth down pass was incomplete as Melrose took over own downs.

Nyland gained 16 yards for a first down at the Warrior 47. However three plays later, Nyland’s pass was intercepted by Kane at the Wakefield 39 where the Warriors took over.

Wakefield was unable to convert a first down as a Christian Perkins sack on Buckley resulted in a long yardage and the Warriors were forced to punt the ball away.

“We were without out right tackle, Jared Regan, and we lost Nick Nice to a calf injury. We were down to six linemen and we had some kids in there late in the third quarter who haven’t played a lot,” said Cummings. “We had our opportunities to hang in there with the turnovers. They’re a good team and you have to take advantage of their mistakes. We weren’t able to do that.”

Melrose took possession of the ball with 5:55 remaining and proceeded to run nine plays to kill the clock and end Wakefield’s playoff run for the second straight year.