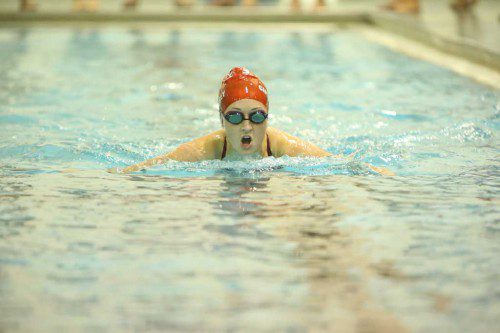 MADISON GUAY, a senior captain, captured first place in the 100 breaststroke in a time of 1:16.37 in Wakefield’s dual meet finale against Winchester. (Donna Larsson File Photo)

MEDFORD — The Wakefield Memorial High girls’ swim team is now going on to the league meet.

The Warriors wrapped up the dual meet portion of their schedule with a 91-74 setback against Winchester on Thursday afternoon at the Medford High School.

Wakefield finished the regular season with a 3-6 record.

The Warriors and Sachems swam in the eight-lane Medford pool which afforded both teams the opportunity to enter extra swimmers to compete unofficially.

“There were some close races for the second, third and fourth places,” said Coach Kathy Byrne. “We had a few people swim their best times. Medford has a nice pool and it’s nice to be able to swim there. It was the last meet for Winchester and Wakefield before the league meet.”

Wakefield did have four first place finishes in the meet.

Senior Madison Guay secured the top spot in the 100 breaststroke as she clocked in at 1:16.37.