Warriors blanked by Falcons, 28-0, in Div. 2A North quarterfinal round 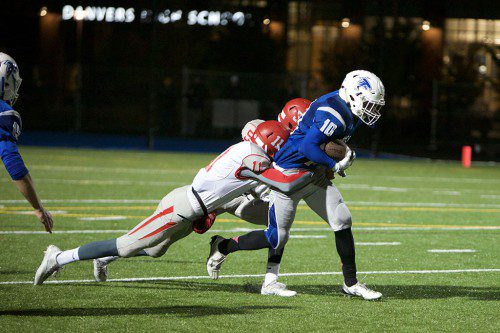 DANVERS — When Wakefield resident Shawn Theriault was a member of the Wakefield Memorial High football team back in 1997, he was part of a Warrior team that was a Super Bowl finalist. As the current Danvers High head coach, he led his Falcons to a victory which ended Wakefield’s championship aspirations for 2016.

Danvers was better in every phase of the game as the third-seeded Falcons blanked the sixth-ranked Warriors, 28-0, on Friday night in a Div. 2A North quarterfinal game on Morse Field at Dr. Deering Stadium.

As a result of the win, Danvers (7-1) will play in a Div. 2A semifinal game this Friday night at 7 p.m. at second-seeded North Reading. North Reading blanked seventh-seed Bedford, 35-0, in its quarterfinal contest this past Friday.

“We did not play well. They’re good but we made big mistakes and didn’t put ourselves in a good position,” said Warrior Head Coach Steve Cummings. “We gave them a touchdown on the blocked punt. We made them earn the touchdown on their first drive. But we gave them the other three.”

Senior RB Matt Andreas proved as good as advertised as he led the Falcons with 107 yards rushing on 17 carries with a touchdown. As a receiver, Andreas had five receptions for 75 yards and a touchdown.

“Number 10, Andreas, you don’t stop him but you hope to contain him,” said Cummings.

Danvers proved it had more weapons than Andreas. Senior QB Dean Borders completed five of nine passes for 71 yards and a touchdown before leaving the game late in the first half with a sprained ankle injury. His backup, junior Justin Mullaney, proved to be every bit as good as he completed a touchdown pass on his first attempt and completed six of 10 passes for 94 yards.

While the Falcons’ offense was good, it was the play of the Danvers defense which made Theriault proud. He also admitted it was fun playing Wakefield given his ties to the community.

“Wakefield is my hometown and I teach there at the middle school,” said Theriault. “I know their coaching staff and they’re a good group of guys. Wakefield is a well coached team. We were able to make plays. The blocked punt gave us some momentum and the 14 points late in the first half put a dagger in them. We’re still a defensive first football team.”

“It was tough for us to move the ball,” said Cummings. “Offensively, we were a little beat up on the line. Devin O’Brien didn’t even play and Joe Connell played hurt. We also had to put Alex Joly at left tackle and he is usually a fullback for us.

“We made mistakes in big spots,” added Cummings. “Danvers is a good football team but we put ourselves in a tough spot to win the game.”

Danvers got the ball first and sustained a 12 play scoring drive which covered 62 yards and ate up most of the first quarter.

Andreas did most of the work as he gained seven, zero, five, one, five, four and nine yards. Andreas also caught a seven yard pass on fourth down and seven from the Warrior 44 to move the chains. Borders also had runs of two, three and four yards. On a second down and one play from the 15, Andreas broke through a 15-yard TD jaunt to get the Falcons on the board.

David Dzebic added the PAT to give Danvers a 7-0 lead with 3:34 remaining in the first quarter.

Wakefield started its first series at its own 27. But a procedure penalty on second down resulted in a long yardage and the Warriors lined up to punt on fourth down from their own 30. But a roughing the kicker penalty on Danvers gave the Warriors a first down at their own 45. An offside penalty on the next play moved the ball to midfield.

But an eight yard sack by Jordan Sawyer put Wakefield into long yardage and the Warriors did punt the ball away from their own 43 on the final play of the first quarter as Pat Leary got off a 43 yard kick.

Danvers started from its own 26 after a 12 yard return by Andreas but Wakefield made a stop as the Falcons punted the ball away. Wakefield started at the 50 after a Ryan Fitzpatrick 10 yard return. But an illegal block penalty on second down put Wakefield in long yardage again. Then a fumble by Will Shea ended the drive with Cole Johnson recovering the loose ball at the Wakefield 37.

Danvers needed seven plays to get into the end zone. Andreas had runs of six and nine yards. After a yard gain by Borders, Andreas had rushes of three, seven and five yards. On second down and five from the six, Borders found senior WR Zach Turner with a six yard strike in the left corner of the end zone.

Dzebic added the extra point to give Danvers a 14-0 advantage with 5:06 left in the second quarter.

Wakefield started from its own 28 on its next series of downs. The Warriors netted a first down on a pass interference call against Danvers. Wakefield was unable to move the chains once again as it lined up to punt the ball from its own 40. Leary’s punt was blocked by senior lineman Kyle Purcell and junior DE Franco Abbatessa picked up the loose ball at the Warrior 32 and returned it to the end zone.

Wakefield got the ball again and started at its own 41 after a 14 yard return by PJ Iannuzzi. Sophomore QB Mike Lucey (nine out of 18 passes completed for 53 yards) found Fitzpatrick with a 15 yard pass to get the ball to the Danvers 44. Then senior RB Joe Marinaccio caught a four yard pass. But after two incompletions and a delay of game penalty on fourth down, Lucey gained two yards on keeper on a fourth down and 11 play as Danvers took over at its own 43.

A false start penalty pushed the Falcons back. But after that they marched down the field once again to score their final TD of the night. Danvers needed just seven plays to get into the end zone for the fourth time.

After an incompletion by Borders, senior RB Quintin Holland, Andreas and junior WR Tahg Coakley had receptions of 12, five, three yards. Borders then had an incompletion on first down and Danvers was backed up 15 yards for unsportsmanlike conduct. On second down and 25, Borders gained two yards but was injured on the play. He left the game and never returned. On a third down and 23 play from the Wakefield 27, Mullaney found Andreas in the right corner of the end zone with a TD strike.

Dzebick added the extra point to give Danvers a commanding 28-0 lead with 11 seconds to go before halftime.

“Andreas is a great player,” said Theriault. “He’s a running back but does a lot extra. He catches passes, plays defense and returns punts. Losing Dean Borders was tough, but Justin Mullaney stepped in and did a nice job. Justin makes some throws better than Dean, but there are some throws Dean makes better. They’re both good players.”

Marinaccio gained a yard and then broke a rush for 20 yards and a first down at the Danvers 36. But Wakefield got no further and after a false start penalty, punted the ball away from the Danvers 42.

Junior WR Matt Reidy caught an 11 yard pass and Andreas broke a 20 yard gain as Danvers had a first and goal from the Wakefield 10. But the Warriors held on the first three downs. On fourth down and goal from the six, Mullaney’s pass was incomplete as Wakefield took over.

Wakefield didn’t move the chains and the Warriors punted the ball away on the final play of the third quarter.

Danvers took over at the Warrior 37 after a 27 yard punt. Danvers got one first down and got as far as the Wakefield 19 before turning it over on downs.

Lucey gained 10 yards on first down. After an incompletion and one yard gain by Lucey, the sophomore was sacked by Abbatessa for a five yard loss on third down as Wakefield punted the ball away.

Danvers began its next drive at the Warrior 41. But two fumbles on the drive (neither lost by Falcons) resulted in Wakefield taking over on downs at its own with 2:26 left in the game.

Fitzpatrick gained nine yards and then lost four yards on second down. After an incompletion on third down, Lucey found senior WR Alex McKenna with an eight yard gain on a fourth down and five to pick up a first down at the Wakefield 43. Lucey’s final completion was a 22 yard pass to Leary bring the ball down to the Danvers 35. Junior QB Bob Keegan came in and threw two incompletions as a time ran out.

“We now have two games to figure out how to get back in a groove before we play Melrose for the league title,” said Cummings. “We still have something to play for, not every team does.”