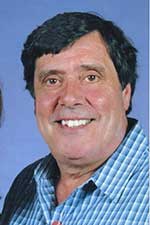 MELROSE — Frank T. Reardon, 63, of Melrose passed away at Lahey Hospital and Medical Center in Burlington on Sept. 14.

Frank was born in Melrose on July 20, 1953, he was raised in Melrose, graduated from Melrose High School Class of 1971 and was a lifelong resident.

Mr. Reardon worked as an auto mechanic throughout his life for different companies and for the Town of Wakefield DPW for 19 years.

He was a member of the West Side Social Club in Wakefield, and enjoyed going to the old Kernwood Restaurant, eating at all the sub shops and restaurants in downtown Melrose, especially Petrone’s where he has a calzone named after him called “Frankie.”

Mr. Reardon had a great sense of humor, was very good at trivia and enjoyed military history. Frank enjoyed his trips to Fort Lauderdale By The Sea to visit family, he loved the Beatles and had an affinity for cars, particularly all the Corvettes he owned over the years.

He was also a talented musician who played the organ, piano and guitar and was a member of the CIA Band.

Frank was the loving companion of Donna Favorat of Peabody. He was the son of the late Francis G. and Mary Ann (Dugan) Reardon. He was the caring brother of William F. “Bill” Reardon and his wife Karyn of Salem, Patricia A. Reardon-Longever of Florida and Mamie Reardon of Saugus. He was the cherished uncle of Melissa and Jaime Longever. He is also survived by many close CIA Band members and friends.

Burial at Wyoming Cemetery in Melrose.

In lieu of flowers contributions may be made in Frank’s name to a charity of your choice.