World War II veteran had a passion for music 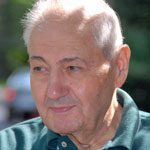 MELROSE — Gaetano J. “Gus” Leccese, 93, of Melrose died peacefully at his home surrounded by his family.

Gus was born in Cambridge on July 22, 1921. He was the son of Joseph and Anna (Nardella) Leccese, both of whom were hard-working Italian immigrants who instilled many values in their children.

Gus was a product of the Great Depression and, as a result of living through those times, he learned the value of a hard day’s work and appreciated everything he had, including his strong and loving family.

There was a company two doors down from his house called Bancroft Barrel Company. Gus started working at Bancroft Barrel when he was 11 years old and he continued to work there for over 78 years.

He attended Catholic school at St. Francis School near Lechmere on Cambridge Street at first, then studied at Wellington School on Windsor Street. He finished ninth grade in 1937 from Cambridge Rindge Technical School and then worked full time at the Bancroft Barrel Company.

Gus also had a passion for music and his cousin Mary’s husband, Tony Mancini, taught Gus how to play the violin. To earn extra money, Gus played the violin at clubs and weddings on the weekends.

Gus entered active duty on Sept. 4, 1942, for the United States Army. Because Gus was trained in high school as a mechanic, he was sent for more training at Camp Lee, Va. for four weeks to continue his training in auto mechanics. Gus was deployed to Alaska’s Aleutian Islands for two years. Gus was honorably discharged with Asiatic Pacific Theater Ribbon and a Bronze Good Conduct Medal of Honor on Oct. 27, 1945, from Fort Jackson, S.C.

Gus met the love of his love, Rita Rigano, while on leave from the Army. They kept in contact throughout the war, writing many letters back and forth. They continued their relationship after Gus was discharged from the Army and got engaged on Dec. 14, 1945, on Rita’s 21st birthday.

In addition to the family enjoying vacations at Booth Bay Harbor, Maine and to Cape Cod, Rita and Gus had lots of friends. Gus enjoyed bowling and playing cards in his spare time as well as socializing with his many friends. After Rita’s death in 1990, Gus reunited with his first girlfriend, Mary Caruso Coakley. They were companions and friends for over 20 years until her death.

Gus and Rita are survived by Joseph G. Leccese and his wife Elaine of Woburn, Richard P. Leccese and his wife Joan of Melrose and Marylou Leccese Graham and her husband Robert of Melrose. Gus was also the grandfather to Richard, Kerry, Jenine, Joseph, Angela, Kirby and Sarah. He was also the great-grandfather to Nicolas, Anthony and Avianna. Gus was the brother of Vinnie Scarfo and her late husband Edmund; his late brother Phillip and his late wife Louise. He was the son-in-law of the late Santi and Louise Rigano; brother-in-law to the late Basil and Nancy Rigano, Louise and Josephine “Jo’ Miele and James and Marie DiGiovanni, all of Malden. He is also survived by many nieces and nephews.

A funeral Mass was held at the Most Blessed Sacrament Church, 1155 Main St., Wakefield on Thursday, Oct. 9, at 10:30 a.m. Visiting hours were held at the Gately Funeral Home, 79 West Foster St., Melrose.

In lieu of flowers, contributions may be made to the Cystic Fibrosis Foundation, 220 North Main St., Natick MA 01760; https://www.cff.org.