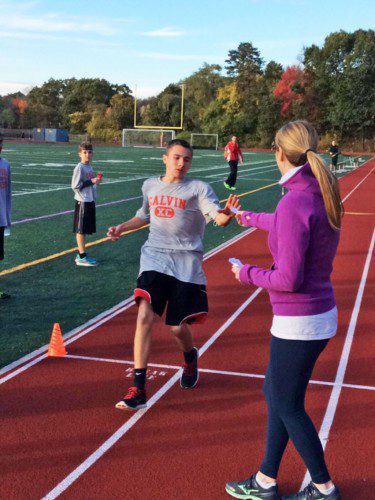 Brian Smith was the winner of the seventh/eighth grade boys’ race.

In the seventh and eighth grade boys’ race, Brian Smith had the fastest time of the day winning in a scorching fast time of 12:00. To put it in perspective the time was comparable or better than the times Matt Greatorex and Robert Shaw ran while in middle school last year. Both boys are now ranked as top freshmen in Massachusetts.

Rocco Patel (12:25), Billy Stevens (12:29), Tanner Jellison (12:38) and Colin Powers (12:48) were close behind as they helped give the Galvin seventh and eighth graders a perfect score of 15 points to Melrose’s 44 points. This makes for a very promising future for the high school program that is already filled with young and talented athletes.

In the fifth and sixth grade boys race, the Galvin ran away with it to defeat Melrose by a score of 18-43, thanks to the top three finish of Alex Jacob, Michael Petitto and Lea Yardumian. Sixth grader Jacob ran away from the pack early to take the win with a time of 12:46. Petitto was second in 13:04 while Yardumian was third in 13:06. 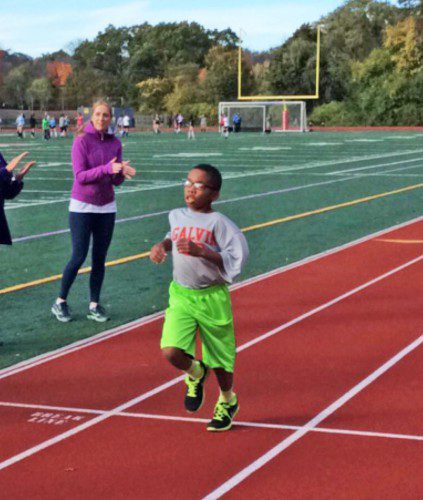 Alex Jacob was the first place finisher in the fifth/sixth grade boys’ race.

the Wakefield team a low score of 18 points.

The Galvin girls also competed against Melrose. Melrose came away with a win as it took the first four spots. Liliana Carioli was the first Wakefield girl in fifth in a time of 13:41 and Sophie Brown was sixth at 13:53.