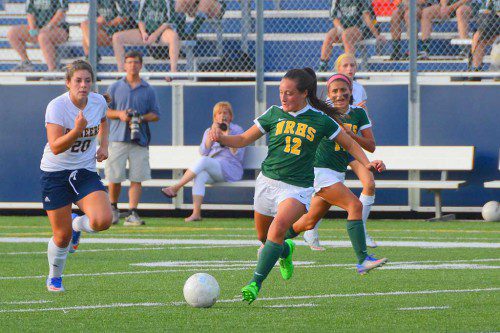 NORTH READING — The Lady Hornets’ soccer team’s  three game winning and shutout streak was snapped by the rival Lynnfield Pioneers with their 1–0 victory on Sept. 21.

The Pioneers lone goal came in the first half. North Reading tried to battle back in the second half. But the Lynnfield defense was tenacious and the goal stood up, ultimately leaving the Hornets off the scoreboard.

North Reading responded to their defeat by Lynnfield with a bounce–back 2–0 road victory over the Amesbury Indians on Friday. Senior captain Marissa Zarella and junior Karlie Vesey scored for the Hornets. Senior goalie Katerina Hassapis made five saves to earn her fourth shutout of the season.

The Hornets were in complete control in the first half. They scored twice and took a 2–0 lead into the half. The two goals proved to be enough. In the second half both teams were held off the scoreboard and North Reading went on to victory.

The girls have a busy upcoming schedule. They entertained the Ipswich Tigers on Tuesday in a 4:30 p.m. game at Arthur Kenney Field and will travel to Manchester–Essex on Thursday for a 3:45 p.m. start.

On Friday, the girls are home versus Shawsheen at 3:45 p.m. and on Wednesday, they play host to Georgetown at 4:30 p.m.