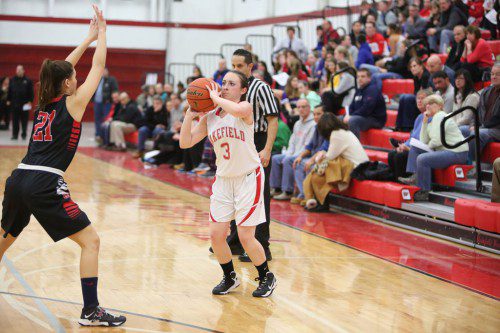 AMANDA BOULTER, a senior guard, scored a game high 17 points including four three-pointers as the Warriors posted a 51-41 triumph over Winchester on Friday night at the Charbonneau Field House. (Donna Larsson Photo)

WAKEFIELD — The Wakefield Memorial High School girls’ basketball team took another step in its journey toward state tournament qualification with another win Friday night which snapped a two-game losing streak.

The Warriors welcomed the Winchester Sachems to the Charbonneau Field House where Head Coach Meg O’Connell’s team put their 6-4 record on the line against Winchester and prevailed by a 51-41 score.

Coach O’Connell was pleased with her what she saw from her team on Friday.

“I thought the girls came out strong,” she said. “I thought we were in control.”

Wakefield rode some hot shooting and some tough, gritty play by seniors Amanda Boulter and Daniella Iannuzzi to the 10-point victory over the Sachems.

Iannuzzi scored eight of her 13 points in the first quarter and Boulter had the first of her four three-pointers to fall in the opening quarter as the Warriors took a 15-9 lead into the break.

The second quarter was Boulter’s high output for the game, as she knocked down two more threes, including one to beat the buzzer at the end of the half, on her way to nine more points. She would finish with a game high 17 points.

Coach O’Connell’s Warriors have committed themselves to winning games defensively and in the first half they flexed their muscle, holding Winchester to 19 points, nine in the first and 10 in the second.

At the halftime break, Wakefield held a 10-point advantage at 29-19.

The Warriors came out a little slow in the third quarter as Winchester outscored them 13-10 in the frame.

Gabby Joly had four of her six points in the third, while Jill Raso and Nicole Galli had field goals for Wakefield as well in the quarter.

With eight minutes left to play, Wakefield held a 39-32 edge at the start of the fourth.

“Winchester did a nice job,” said the coach. “They made a couple runs at us. What was nice was that we didn’t really get frazzled, we came right back and we were able to push the lead back up.”

The Warriors would make their run and put the game away at the beginning of the fourth quarter just by refocusing on their defense and settling on offense according to Coach O’Connell.

The quarter opened with Iannuzzi making one of two free throws on an early trip to the foul line. Following the free throw, Wakefield went on a 10-0 run to stretch the lead to 50-32 capped by back to back three-pointers by Boulter and Raso.

Winchester closed the game on a 9-1 run but by then the damage was done.

“We’re so athletic that when we have intensity on defense good things happen,” O’Connell said in reference to how her team gained an edge Friday evening.

When the final buzzer sounded, Wakefield stood victorious by a 51-41 margin, improving its record to 7-4 overall on the year and 6-4 in the Middlesex League Freedom division.

The win takes the Warriors one step closer to the state tournament but Coach O’Connell is remaining focused on the road ahead.

“I like to focus on playing fundamental basketball and those things are a result of playing good fundamental team basketball,” she said.

Her players know what is at stake but they’re not going to lose focus either.

“I think it’s on their minds for sure but we’re focused on executing Wakefield basketball,” said O’Connell

As for the next game, Wakefield’s game against Belmont scheduled for tomorrow night has already been postponed. No makeup date has been announced.