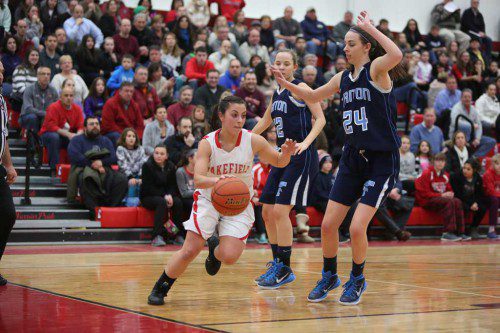 SENIOR GUARD Nicole Galli is the floor general for the Warrior offense from the point guard position. The WMHS girls’ hoop team will be seeking to upset second-seeded Pentucket tonight in a Div. 2 North quarterfinal game at Pentucket Regional in West Newbury. (Donna Larsson File Photo)

The win over the Vikings was the first tournament win for head coach Meghan O’Connell and the first for the girls’ program in nearly a decade and improved the Warriors’ record to 13-7 for the year.

With the win Wakefield has set up a Thursday meeting with the second-ranked Pentucket Regional, a team that has lost just one game all season. That quarterfinal game is tonight at 7 p.m. at Pentucket Regional in West Newbury.

The Warriors are a team that relies heavily on the contributions of their senior players, with four of the usual starting five playing their final season for the Warriors.

Galli runs the offense from the point guard position and seems to have a motor that never stops, while Iannuzzi does the Warriors’ dirty work in the low-post and can burn teams with her shooting from long range.

Raso is the team’s most imposing defender as her length and athleticism along with a knack for anticipating where passes are going helps keep opposing teams off the scoreboard. Raso has the ability to score on offense as well, and in recent games, her shooting has become a more potent weapon for the Warriors.

Wakefield Memorial High has seldom seen a player wearing the red and white who can shoot the ball quite like Boulter. As word spreads around Div. 2 North of Wakefield’s sniper, Boulter finds more ways to get open and sting opposing defenses with her accuracy from beyond the three-point line. Pentucket will need to be keeping an eye on Boulter if it is going to beat the Warriors.

Off the bench Wakefield turns to several underclassmen as options. O’Connell’s most often used subs include junior guards Grace Hurley and Mia Joyce. Against Triton, senior Mackenzie Collins made the most of her appearance, scoring five points including a three-pointer.

Seniors Julia Filippone and Alyssa Rossino, along with juniors Julia Derendal and Emma Butler are lesser used subs off the bench for O’Connell. But whenever they’ve been called upon they have provided the relief needed to get the starters a rest while remaining competitive on the floor.

The Sachems are led by their senior co-captain guard combo of Kelsi McNamara and McKenna Killian. McNamara led the Cape Ann League in scoring at 19.2 points per game and surpassed the 1,000 point plateau for her career this season in a Jan.16  matchup against Ipswich.

The closest game the Sachems played saw them knock off Manchester-Essex on a last second three by McNamara on Jan. 19.

During the year, the Sachems took down Middlesex League opponents Reading, which Wakefield defeated, and Belmont, which defeated Wakefield.

The Pentucket team is guided by head coach John McNamara.

The winner will the face the quarterfinal winner between third-seeded Arlington Catholic (17-5) and 11th-ranked Burlington (11-10) in a semifinal game on a day, time and venue to be announced.