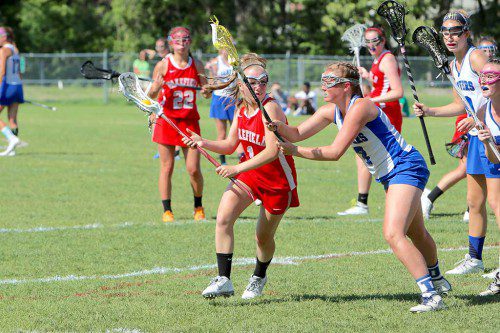 DANVERS — The Warrior girls’ lacrosse team had its best regular season ever posting 13 wins. However earning that first state tournament victory will have to wait another year.

Wakefield gave Danvers a game for a half, but the second half was a different story as the Warriors were handed an 18-6 defeat by the Falcons in a Div. 1 North first round game yesterday afternoon at Danvers High School.

Wakefield finished up the year with a 13-6 overall record as its historic season came to a disappointing end.

The Warriors and Falcons played a back-and-forth first half and the two teams were tied at 5-5 at halftime. But Danvers scored the first three goals of the second half and, despite Wakefield getting one back, the Falcons outscored the Warriors 13-1 over the final 25 minutes to turn a close game into a one-sided affair.

“We didn’t have it today,” said Coach Cara Luca. “Danvers was stronger and tougher. They wanted it more. This is a tough loss. We had a 13-5 regular season record which is the best in Wakefield (girls’ lacrosse) history. It’s frustrating because I know we could’ve played better.”

The Warriors made their fourth state tournament appearance since the program came into existence in the early 2000s. The previous three times Wakefield played M.L. rivals Winchester and Woburn in the first round in ‘03, ‘12 and ‘15. This was the first time the Warriors faced a tourney team from a different league.

Wakefield also played on a grass surface for the first time this season. While the Warriors are used to turf fields, Luca doesn’t believe the playing surface made too much of a difference.

“We never played on grass this year. It made a little difference on the ground balls with the bounces,” said Luca. “We were able to practice them during warmups. We needed to go to the ball more and not give up on ground balls. We also dropped a lot of balls and didn’t capitalize when we had the chances.”

Emily Ryan, a junior midfielder/attacker, netted the first goal for the Warriors at 20:19 of the first half.

After a pair of saves by senior goalie Mikayla White on junior Morgan Mscisz and senior Allie Zunick, the Falcons got a pair of goals at 16:06 and 15:17 from Zunick and sophomore Isabel McKenna. Olivia Heutlinger, a senior, and Mscisz earned the assists on the two goals.

Wakefield tied the game at 2-2 at 14:51 as Julia Brown, a sophomore attacker, finished off a Kelsey Czarnota pass.

The Falcons regained the lead at 12:31. McKenna netted the goal with Zunick getting the assist.

Wakefield tied the game at 3-3 at 10:11 with Brianna Smith, a senior attacker, finding the back of the net.

Zunick put Danvers in front at 7:01 with Olivia Davis earning the assist.

The Warriors tied the game at 4-4 with Czarnota, a junior center, finishing off a pass by Brown.

Wakefield scored again at 1:22 to take a 5-4 advantage. Smith tallied the goal.

After the halftime break, the two teams switched sides of the field. Danvers tallied goals at 24:13, 22:24 and 22:11 to open up an 8-5 lead. Armstrong, senior Kristen McCarthy and Zunick scored the goals with Davis assisting on the first score and Mscisz assisting on the third goal of the second half.

Luca called a timeout after the third straight Falcons goal to settle down Wakefield and urge the Warriors to work harder. The timeout paid off when Wakefield scored at 21:12 to cut the lead to 8-6. Ryan scored the goal on a pass from Czarnota.

But shortly after that, Czarnota was called for a push with her stick while tripping on the play said Luca, who asked and received an explanation from the referee that made the call. The junior received a red card from that referee and had to leave the game. That occurred at 18:15 and the Warriors never recovered.

There were several yellow cards issued and several players that were penalized for two minutes for those infractions. But the red card resulted in a 4:00 man-advantage for the Falcons and they made the most of the opportunity to pull away.

During that time, senior Bianca Passacantilli replaced White in goal at 17:05.

The Falcons pumped in five more goals to account for the final score. Zunick, Mscisz, Armstrong, Davis and Zunick scored the goals at 9:17, 8:30, 6:12, 4:00 and 2:08. Davis had one assist and McCarthy had two on pair of scores during eight minute stretch.

“Kelsey has been playing hurt from the Melrose,” said Luca. “Losing her for the misconduct hurt our offense. She is one of our top players on offense and helps makes us go. We couldn’t regroup. We just lost it in the second half. Everything fell apart.”