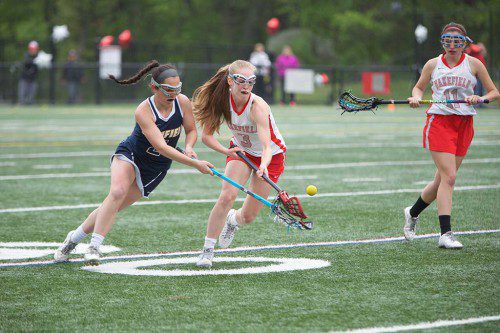 It was a rematch of a game played earlier this year that was back-and-forth and came down to one goal in favor of the Warriors. Wakefield was hoping to get back into the win column following a narrow one goal road loss to Watertown in its last game.

That first matchup was played in some torrential rain conditions, but yesterday no such claim could be made. In a mark of improvement throughout the season, the Warriors dominated the field on their Senior Night and took it right to the Pioneers. In the end, the Warriors prevailed by a 13-3 final score.

The win brings the Warriors’ record to 13-4 with one game left.

“The first time we played it was pouring, it was cold, it was bad and we’ve grown since then so we shined today,” said head coach Cara Luca following the win.

Wakefield got out ahead early as Emily Ryan notched the first goal giving the Warriors the lead in the first five minutes. Lynnfield came right back and scored a goal to make it 1-1, where the score stood for about half of the first half.

Wakefield was dominant in possession thanks in large part to the face-off ability of Kelsey Czarnota and held onto the ball well.

With the score tied at 1-1 and the eight minute mark approaching, Julianne Bourque centered a pass to Brianna Smith who wasted no time in putting it by the Lynnfield goalie and giving the Warriors a 2-1 lead.

Lynnfield called a time out to regroup, but it only allowed the Warriors a chance to communicate what they’d been seeing and how to exploit the Pioneer defense.

After a face-off win by Czarnota, the Warrior center wasted no time as she moved the ball toward the goal. After getting the defense to commit to her, Czarnota moved the ball quickly to Smith who once again put the ball in the net giving the Warriors a 3-1 lead in a matter of 20 seconds.

A couple minutes went by with possession changing hands a few times. Lynnfield managed to break down the field and snatch a goal back, making it 3-2 momentarily. Wakefield took the next face-off and worked the ball around the offensive zone. With a significant amount of time passing, the Warriors looked a bit at a loss as to where the next goal would come from.

Then with 2:36 on the board, Czarnota had enough of passing and took the next shot to give the Warriors a 4-2 lead.

As time wound down in the first half, Smith scored again, giving her three first half goals and making the halftime advantage 5-2 in favor of Wakefield.

What seemed like a game that could go either way, and history had proved with these two teams that things could get close late, one sat in anticipation of a grueling second half.

The start of it lent to the feeling that this would be another close one between the two teams, with Lynnfield scoring the first goal of the second half, cutting the lead to 5-3.

However, the Warriors went on to score eight unanswered goals and bring home a resounding 10 goal win by a 13-3 final score.

Lynnfield made some noise after it got down big, and held some possession in the Wakefield half of the field. The Warrior defense stood tough and made making passes near the net difficult for the Pioneers.

Warrior goalie Bianca Passacantilli came through on a number of occasions to limit the Lynnfield goal total to just one in the second half. Passacantilli had 11 saves on the day.

“It was a good senior night game,” she said, but the Warriors have no time to bask in their most recent win as Luca noted. “We have Arlington tomorrow (Wednesday). I’m expecting a tough match with them.”