Girls’ soccer ready to kick off the fall

Published in the September 7, 2016 edition 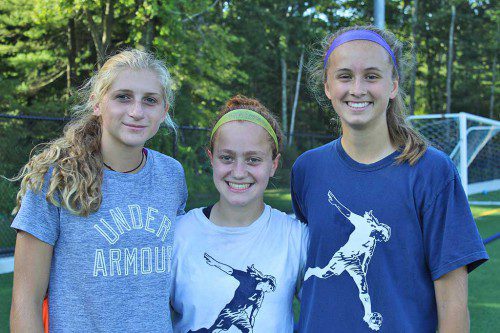 THE GIRLS’ SOCCER tri-captains chosen to lead the 2016 Pioneers are (from left): juniors Lizzy Shaievitz and Sydney Santosuosso and senior Liz Reed. Upperclassmen will rule this year’s varsity team as 17 of the 19 spots on the roster are held by juniors or seniors. (Maureen Doherty Photo)

LYNNFIELD — The girls’ soccer team is looking to make some noise in the Cape Ann League and Division 3 North state tournament this fall.

The Pioneers concluded last season with a 10-7-3 record and qualified for the state tournament. After defeating Newburyport 2-1 in the first round of the tournament, Lynnfield fell 3-2 to Hamilton-Wenham in penalty kicks in the Division 3 North quarterfinals.

Lynnfield has a talented and experienced roster returning this season, which gives Pioneers head coach Mark Vermont high expectations for the upcoming year.

“I am excited,” said Vermont. “We have already picked the team and we have 19 players. We are led by a strong junior class and senior class.”

Three captains will be leading the Pioneers this season, two of whom are juniors. The only senior captain is forward Liz Reed, who played a major role on the Pioneers last season as well as during Lynnfield’s run to the Division 3 North state finals in 2014.

“Liz is very composed on the ball,” said Vermont. “She cares about the team and does whatever it takes to win.”

Junior captain Liz Shaievitz will be starting at forward for the Pioneers this fall.

“Liz is aggressive, fast and moves well off the ball,” said Vermont. “She really cares about the team.”

“Sydney is composed on the ball and sees the field well,” said Vermont.

Senior Christa Romano will be one of the Pioneers’ key defenders this season.

“(Romano) has been through a lot of battles with us,” said Vermont. “She is a skilled player and has a lot of speed.”

The Pioneers have 10 players returning from last season’s team, including senior Caroline Buckley. Buckley will be playing forward and midfield this fall.

Junior Kate Mitchell will be splitting time between forward and midfield as well.

“Kate is fast,” said Vermont. “She has great technical skill and good vision.”

Junior Grace Sperling will be playing midfield once again.

“(Sperling) is aggressive, strong and has good determination,” said Vermont.

“Hannah is a strong defender,” said Vermont. “She reads the game well and is fierce.”

Junior Christina Montanile will be playing center midfield as well.

Junior Mackenzie O’Neill played both varsity and junior varsity last season. Vermont he has been impressed with her play during the preseason.

“Mackenzie is good in the air,” said Vermont. “She has shown more confidence this year. She is a very hard worker.”

Vermont said the Pioneers’ upperclassmen will be the locals’ biggest strength this season.

While the Pioneers’ experience will be an asset this fall, Vermont said the team needs to keep working hard.

“With so many new kids on the team, we have to get everybody focused on what we need to do to be successful,” said Vermont.

The Pioneers lost a 3-2 scrimmage to Danvers last week, which Vermont said was a good test for the team.

“We didn’t play well for the first 10 minutes of the first half,” said Vermont. “We played better for the rest of the first half and we played with more fire in the second half. It was a good experience for us.”