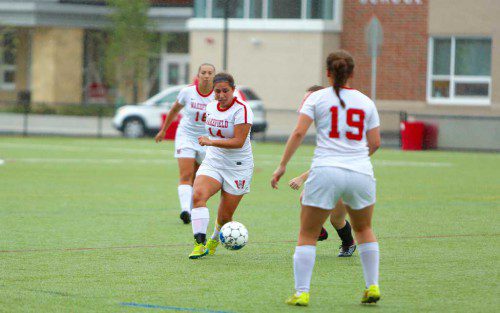 ISA CUSACK (#14) chases down the ball as teammates Jillian Fiore (#16) and Mia Joyce (#19) look on. The Warriors edged Melrose for a 2-1 score for their first win of the year. (Donna Larsson File Photo)

WAKEFIELD — The Wakefield Memorial High School varsity girls’ soccer team has been off to a slow start in 2015 but hopefully for the Warriors yesterday’s game can viewed be a turning point of the season as the team picked up its first win, 2-1 over rival Melrose at Walton Field

“To be where we were before this game was really stressful on them,” admitted Head Coach Jess Marshall after the game. “They’ve been decompressing, the girls are such a tight knit group.”

She has seen her team go through the growing pains of being a young group adjusting to playing together and playing at a high level. In the early part of the season Wakefield’s had its skills tested by some of the most talented teams in the Middlesex League. Though Melrose may not be in the upper echelon of talent, Wakefield will be hard pressed to find a faster, stronger, more physical opponent.

In this game, the girls had to become acclimated to Melrose’s toughness and responded and adjusted accordingly.

“We have had to spend a decent amount of time adjusting to a new team,” the coach said after the win on Thursday. “We’ve been a work in progress. We’ve had to adjust to several injuries, particularly in our backfield. What we’ve been looking to do is have a formation that allows us to have more people on the front line.”

After that, the game became mired in a midfield battle for possession. Amongst the jostling for control of the ball, there were tackles flying in and players getting knocked and pushed on each side but very few foul calls were made as the refs allowed the physical play to go on.

“We are getting used to not getting the calls. We’re learning to not expect it, we’re not going to stop playing, so that’s part of our mental game,” Marshall said.

The first half produced no goals but Wakefield created plenty of chances. The Warriors ended the day with 21 shots, producing an eye-popping 19 saves from Melrose goalie Shannon Jones.

With the score 0-0 at halftime each coach had to think its side was capable of taking home the win but Coach Marshall was very confident her side could get the job done.

At the start of the second half, Melrose had the upper hand winning a couple of corner kicks that forced Wakefield to defend but goalie Emma Hickey was composed in net and snatched the second Melrose corner and started the break for the Warriors.

It was just after the five minute mark when Wakefield went on the counter attack and Olivia Dziadyk fed the oncoming Jess Vinciguerra, who slotted a shot past Melrose goalie Jones to put the Warriors on top 1-0.

With the breakthrough goal on the board, play did not open up and becoming a more free flowing offensive game, instead it reverted back to the physical battle of the first half.

After weathering a storm of Melrose attacks and standing tough defensively, the Warriors grabbed another goal as they hit on the counter attack once again.

In a similar fashion to the first goal, a rush of attackers descended on Jones’ penalty area. Grace Hurley’s cross was put into a dangerous spot where any one of several Warriors attackers just had to redirect it into the net. Vinciguerra was right there again but the last touch went to freshman LeBlanc and the Warriors led by a 2-0 score.

Melrose kept the pressure on and, after it was awarded a free kick in the Wakefield half of the pitch, it was able to deliver the ball into the penalty box just where it needed to be. There was a scramble for the ball but the whistle blew as the ball crossed the line into the net and Melrose had cut the lead to 2-1.

With very little time remaining, Wakefield did well to play smart with possession and drain the remaining time off the clock.

Despite allowing one goal, Wakefield’s defense was stout in front of Hickey in goal and Coach Marshall knows that solidifying the defense will in turn allow the offense to mesh and hit its stride.

“I brought up Megan Foley and Megan Gibbons from the JV team when we came down with all the concussions and the problems we had in the backfield and they’ve stepped in seamlessly.”

Coach Marshall was very pleased with what she saw from her team out there.

“Across the board,” she said, “We have Allee Purcell a sophomore, playing 80 minutes in the middle backfield position. She’s really fast but she’s never played defense before so she’s adjusting. Christina LeBlanc, a freshman, was really impressive. She scored the second goal, the game-winner. (She’s) Phenomenal, I’m so glad. She’s a tough girl, she doesn’t get knocked off the ball much. She did a great job. It’s the toughest I’ve seen her, the most confident I’ve seen her.”

“Isa Cusack is an amazing leader in the back. Grace Hurley, no matter where she goes, she’s amazing,” added Marshall. “Brianna Smith through the middle had a phenomenal game. She is someone who works a lot on her touch, a lot on her confidence.”

It isn’t just personnel the coach has been tinkering with but tactics as well.

“We obviously need to score and that’s what we’ve been lacking,” the coach said. “We are using the width of the field a lot better. We’re sending out wide to Grace or Kelsey (Czarnota) on the wings and they put the crosses in the middle. That made the difference with the goals.”

With another tough week of Middlesex League play ahead of them, Coach Marshall looked forward to its next opponents saying, “We’re really looking forward to Burlington and Watertown next week. Two more games in the small, I really do feel that this team is getting better every single day. We’re going to continue to work on finishing and getting hungry. And knowing that it’s not selfish to take the shot and rip it.”

She knows there is still a long way to go before it is all said and done.

“We talk about that we have most of the season ahead of us,” Marshall said. “That’s what we want.”