Girls’ soccer team finds Lexington to be a rude guest 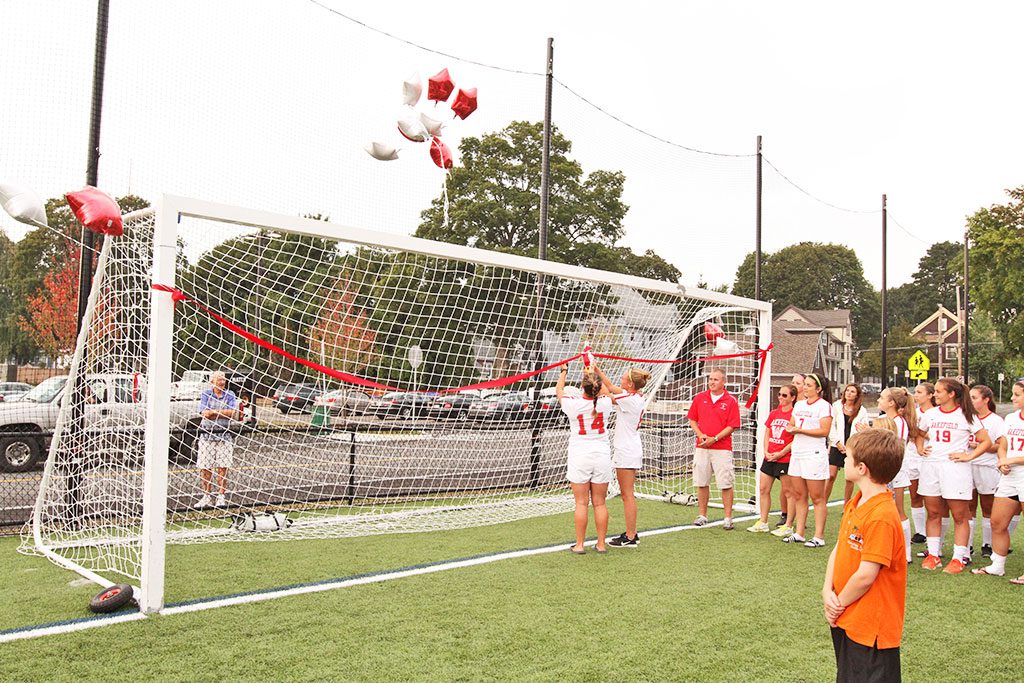 SENIOR CAPTAINS Isa Cusack (#14) and Grace Hurley (right) cut the ribbon to release balloons as members of the varsity girls’ soccer team look on. The new turf field (on the Main Street side of the Galvin Middle School) was dedicated in honor of Dr. Paula Mullen and renamed Mullen Field. (Donna Larsson Photo)

WAKEFIELD — The off-season is finally over and the Wakefield Memorial High School varsity girls’ soccer was back in action once again on Tuesday night as it hosted Lexington in its season opener at Walton Field.

A year ago, the team went 8-7-1 in Middlesex League play and played well enough to earn a state tournament berth However, the hosts were greeted rudely by their guests as the Warriors dropped their first game of the season by a 2-1 score.

In the early season, finding out who will play and where they’ll go out there is a huge task this time around for third year head coach Jessica Marshall.

With a host of graduating seniors now off the team, there were plenty of new faces gracing the pitch on Tuesday when the Minutemen came to town.

In the opening 15 minutes both teams created chances to score. It was Wakefield early on creating the chances and putting the defense on its heels. The created a couple of chances, including a corner that was turned into a dangerous bid before being cleared by the defense.

However, Lexington’s strength was its athleticism and that was a contributing factor as to why the Minutewomen were most effective on the counterattack.

“Through the first few minutes we had issues,” Coach Marshall said after the game. “Defensively we couldn’t keep up with our marks.”

Around the 12 minute mark in the opening half, Lexington earned its second corner of the game. The delivery from the left side swung in and Lexington’s Eleanor Van Arsdell was the first to meet it and knock it over the line for the opening goal.

With Wakefield reeling a bit in the minutes after allowing the goal, Coach Marshall called for timeout around 20 minutes into the first half. During the break she switched up her alignment a bit, moving Mia Joyce from the sweeper position to a midfield role.

“Within 20 minutes I called a timeout and made a few switches in the back in order to get a little bit more speed, more depth, I think it worked for us,” said Marshall.

The change paid off almost immediately as Joyce won a free kick just beyond the midfield line just after the time out.

Isa Cusack wasted no time in taking the free kick as she spotted a streaking Grace Hurley who had made a sneaky quick run to find space down the sideline. Cusack’s ball led Hurley into space where she had plenty of room to drive down and curl in a cross.

With the ball flying in, Lexington’s keeper was at sea and Sarah Grady was crashing in on the far post. There her studs met the ball and put it over the line to equalize the score at 1-1.

“The goal from Grace to Sarah was textbook,” said Marshall, “When we put Grace on the outside midfield it made a difference with our ability to make runs down the line and Sarah Grady is great at crashing the far post and excellent at finishing.”

For the final 10 minutes of the first half, the teams played each other evenly, with each side creating chances forcing their opponents to defend.

Being the first game of the season, the players may not have reached peak conditioning or have mastered the in-form first touch on the ball but defensively both teams looked ready for action.

The teams battled hard and even throughout the second half as well, with neither side able to firmly claim the upper hand.

It was the sort of game where a single instance, be it a bounce of luck or stroke of brilliance, would decide the match.

About midway through the second half the moment came, in the form of a singular example of extraordinary effort and ability. At the 21 minute mark, Lexington forward Jessie Foley took possession around the midfield line. She proceeded to play the ball out in front of her, dance through defenders and simply outrunning the competition. Foley was in 1-on-1 and put the chance away to make the score 2-1 Lexington.

After the goal, which was a bit deflating to the Warriors, Lexington cranked up the pressure on offense. There would have been more goals for the Minutewomen had the Warriors not received superior defensive play from the likes of Christina Freni.

In one play Freni stood in the way of a pair of Lexington rocket shots, deflecting the attempts and clearing the danger safely.

That type of commitment allowed for Hurley to break free on the counterattack. Wakefield’s senior striker had a one-on-one chance with Lexington’s keeper but her attempt was routine and the goalie for Lexington secured the ball with no opportunity for a second chance.

Wakefield had a chance a few minutes later when it was awarded a late corner. Hannah Dziadyk took the set piece for Wakefield and curled the cross into the box. Wakefield had possession but couldn’t angle a shot that would threaten the Lexington goal and that was the end of the chances to score for Wakefield.

A 2-1 loss to Lexington in the opening game is certainly not an ideal way to start a season but beyond the result, it is hard to take away anything but positive things from Tuesday’s game.

“We have been working on our defense, our speed, our ability to make switches if we lose a mark, those necessary skills to keep up in a fast paced game like this,” Coach Marshall said after the game.

She is particularly pleased by her team’s versatility.

“We’re hugely versatile,” she said. “Where we lack in speed we make up for in versatility. We’ve got Sarah Grady and Mia Joyce who’ll move from midfield to backfield, and Grace Hurley who will play everything up front. Something we are going to continue to keep an eye on and keep trying is playing some of our faster players in the backfield.”

“In the first 20-25 minutes where they controlled the game our strikers were nowhere to be found. I do think we made a recovery heading into the second half, I think we were ready,” added Marshall. “Some of the new players and even some of the old players aren’t expecting the speed and toughness of Middlesex League opponents. That’s what Lexington brings.”

The best part about being an early season game is there is very little time to let the pain of losing sink in, as the team has one day of practice before hosting Reading on Thursday.

“We need to focus in on our toughness both mentally and physically,” Coach Marshall said as she begins to plan her preparation for Reading.