Girls’ tennis team picks up where it left off 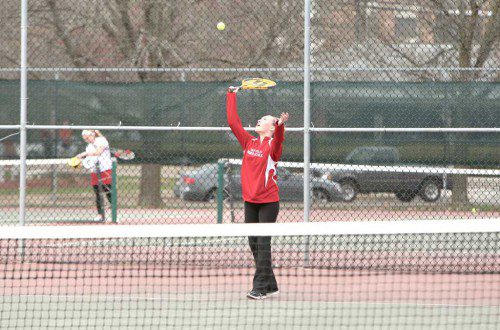 MELROSE — Although the Wakefield Memorial High girls’ tennis team hadn’t played a match since April 15, the Warriors showed no signs of rust yesterday afternoon against Melrose as they cruised to a 4-1 triumph at the Crystal Street Courts.

Wakefield is now 3-2 on the season with the victory.

The win also came with the Warriors shorthanded. The Chapman sisters, Meghan and Abby, were still out of the lineup because of vacation and that resulted in Coach Kathy O’Malley moving her varsity lineup up a spot and having two JV players filling in at second doubles.

At first singles, Sarah Stumpf, a junior, posted a victory in a three-set contest against Lily Fitzgerald. Stumpf won, 3-6, 6-3, 6-3.

Abby Murphy, a senior, played at second singles and posted a 6-2, 6-0 triumph over Hannah Butler.

Wakefield made it a clean sweep at singles as Grace Hurley, a junior, defeated Melrose’s Julia McLauglin by a 6-1, 6-1 tally.

The second doubles team secured the Warriors’ fourth point and that is where two JV players moved up and filled in nicely. The team of sophomore Jenna Mello and senior Solvi Helhoski took on the Red Raider duo of Isabel Bates and Cameron Pfieffer. Mello and Helhoski prevailed by a 6-0, 6-2 score.