But 3 Lady Raiders seeded at top in statewide race 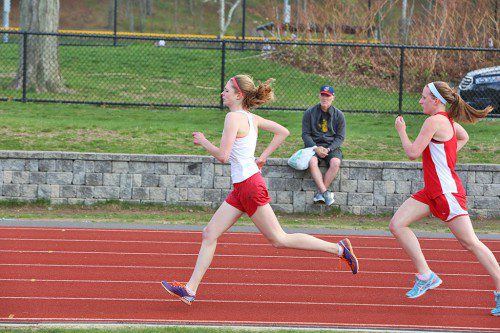 LIZ HIRSCH outpaced her Wakefield opponent in the 1 mile for victory on Tuesday at Pine Banks Park. (Donna Larsson photo)

MELROSE — The Melrose Lady Raider outdoor track team lost a heartbreaker to Wakefield on Tuesday May 5, 64-73 at Pine Banks Park after facing an always-tough Warrior squad.

Melrose was aided by very strong performances including a highlight win by Elizabeth Hirsch in the mile. After holding a slight lead the entire race, Hirsch broke out in a sprint in the last lap to seal the victory. Other wins were secured by Maddie Oro and Haley Moss in the high jump who secured a first and second place respectively and prove to be some of the toughest competition in the division. Shaylyn McCarthy clinched the shot put and discus events and Melrose’s two relay teams (4×100, 4×400) both pulled off victories. Anne Morrison won the long jump event with teammate Erin Reardon also coming up strong in the event.

On Saturday, the team took part in the Middlesex League Freshman/Sophomore meet where the team enjoyed solid performances, including those from Reardon, Tara O’Shea, Gabby Smith, Holly Moore, Caroline Nolan and Grace Mercer. One of the most impressive performances however came from Anne Morrison. The sophomore clinched the long jump, an event she has mastered with a 17-7 jump against Burlington this season. Look for Morrison to be among those competitors take take a bite out of division foes later in the season.

“There’s no day off in the Middlesex League,” says Rudolph. “They produce state champions and the best athletes in the division. We’re lucky to have coaches Dan Burtis, a great distance runner help us, and coach Rick Frazier helping with javelin. Overall, I would say our best days are ahead of us. Our best meet is still out there. We look forward to state wide competition.”

That begins this weekend when the Lady Raiders compete in the MSTCA Coach’s Invitational at Somerville High, a prelude to states. Morrison, Moss and Oro are seeded at the top of their events.