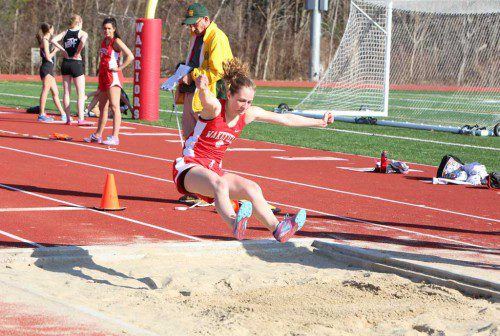 ABBY HARRINGTON, a sophomore, captured second place in the long jump with a distance of 14-4 1/2 and she captured first place in the 400 hurdles with a time of 71.9 seconds in Wakefield’s meet against Stoneham yesterday afternoon at the Beasley Track and Field facility. (Donna Larsson File Photo)

WAKEFIELD — Unlike the Middlesex League Freedom division opener, the second dual meet proved to be more a challenge for the Wakefield Memorial High girls’ track team.

The Warriors had quite a battle against the Spartans but had a little more talent and depth as they posted a 76-60 triumph yesterday afternoon at the Beasley Track and Field facility.

Wakefield increased its record to 2-0 on the season.

“This was a huge win for us,” said Coach Karen Barrett. “Stoneham just beat Melrose on Monday and we knew it was going to be very close.”

Wakefield started off with a nice win from sophomore Abby Harrington in the 400 hurdles running a time of 71.9 seconds just missing states. Nicole Galli, a senior, secured third place for the Warriors in the event as she posted a time of 77.2 seconds.

Wakefield swept the mile with an outstanding state qualifying time of 5:33.4 by Shannon Quirk, a senior. Jill Raso, a senior, was second followed by Reilly McNamara, a junior. They posted times of 6:01.0 and 6:16.5.

Raso jumped a personal best of 4-9 to win the high jump.

In the triple jump, juniors Sarah Buckley and Sam Ross earned a second and third place finish with distances of 32-7 1/2 and 32-5.

The Warriors were swept in both the shot put and discus which resulted in 18 more points for Stoneham.

Alex Rollins and Julia Derendal, a sophomore and a junior, captured first and second in the javelin and both girls had state qualifying throws. Rollins had a heave of 90-0 and Derendal had a throw of 86-4.

Back on the track, Buckley secured a third in the 100 hurdles with a state qualifying time of 16.8 seconds.

Ross and Anna Lucas, a freshman, took second and third in the 100 meter dash. They posted times of 13.9 seconds and 14.1 seconds.

In the 400 meter run, Allee Purcell, a freshman, won with a state qualifying time of 63.7 seconds. Raso was second with a time of 64.3 seconds.

Emily Hammond, a senior, captured first in the 800 meter run with a state qualifying time of 2:28.0 followed by a second place finish by junior Sara Custodio, who just missed states with a time of 2:32.0.

In the 200 meter dash, Ross and Lucas also placed as they took first and third as they clocked in at 28.5 seconds and 29.2 seconds.

Wakefield swept the two mile with an impressive run by freshman Gillian Russell, junior Meg Hudson and senior Hannah Melanson. Those nine points clinched the meet for the Warriors. Russell, Hudson and Melanson timed in at 13:18.0, 13:34.0 and 13:50.5.

Wakefield lost the 4×100 relay as its entry ran a time of 57.9 seconds. But the Warriors ran a state qualifying time of 4:31.7 to take first place in the 4×400 relay. The 4×400 relay team consisted of Hammond, Harrington, sophomore Cassie Lucci and Purcell.

“I was really impressed with the girls today,” said Barrett. “They knew it was going to be tough and they accepted the challenge. It was a great team win. We will be competing in the Nashua North Invitational on Saturday, the 25th.”