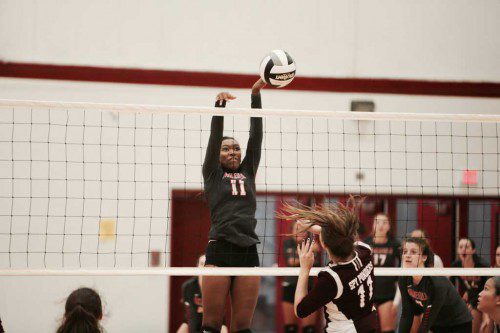 The Warriors are still a young program playing in a league with some very strong competition, which was evident yesterday as the Spy Ponders took the match, 3-0.

Wakefield’s Head Coach Nicole Trudeau saw her team come out with the emotion and energy she needs to get from them in order to compete in the M.L., a welcome change to years past.

“This is the best they’ve looked. We did things tonight that we hadn’t done before as a team,” said Trudeau as she talked after the game about what she saw from her team. “Pursuit of balls that usually we would just watch go over the shoulder. If someone shanks a ball we don’t run for it. And energy, it’s what we’ve been telling them they need.”

The game started out slow for the Warriors as Arlington jumped out ahead quickly in the first set. With the Warriors struggling and the score at 10-3, Coach Trudeau called for a timeout to focus her squad.

In the short-term the Spy Ponders scored five out of the next seven points, including an ace on the serve for their 15th point of the set.

The Warriors made a run, scoring five straight points, but Arlington came right back and scored five of their own.

With the first set score at 20-10, Wakefield needed to go on a run. The teams traded points for a few serves, but with the end of the set approaching quickly things didn’t look good for the Warriors.

At 24-14 Wakefield needed make up ground. Leading the way back into the set for the Warriors were juniors Emma Butler and Abbie Badgett, cashing in on set ups by their teammates from the outside hitter position.

Despite all the momentum shifting to the Warriors side by the end of the first set, the Spy Ponders claimed set number one by a 25-17 score.

The teams switched sides for the second set, and things got going much like they did in the first set. Arlington grabbed the first four points of the set, which would prove to be the difference.

Unlike in the first set, the Warriors didn’t allow Arlington to amass an insurmountable lead in the beginning of the set.

Despite spotting the Spy Ponders the first four points, Wakefield sorted its game out and began to make headway cutting into the lead.

Arlington’s largest second set lead came as it notched its 16th point to Wakefield’s 11, but the Warriors weren’t deterred, and stormed back to cut the lead to 19-17, then the teams traded points.

With their backs against the wall going into the third set, the Warriors were in need of a change in momentum. However, Arlington started the third set strong, grabbing the first three points.

It was 3-0 in the third set when Wakefield turned it on and put in its best play of the match.

A momentous score by Badgett after several volleys gave Wakefield their first point of the set, as the junior found some space to just tap the ball down into with three Spy Ponders players diving to save the point.

That sparked Wakefield to go on to score the next five points to jump into the lead for the first time in the match.

The run prompted Arlington’s coach to call for a timeout to stop the momentum Arlington came out of the timeout and scored the next two points, but Wakefield got sixth and led 6-5.

Arlington could see that Wakefield wasn’t going down without a fight, and the Spy Ponders had to turn up their game if they were going to hold off the Warriors. Arlingtonscored the next 5 points to take a 10-6 lead.

Wakefield got a couple points back as Arlington’s hitters lost their touch a bit and started over hitting balls. The Spy Ponders went on another mini-run with the score at 10-8 and jumped out to a 13-9 lead.

The score went to 14-11 and the two teams began trading points again. Arlington held a 16-13 lead, but Wakefield stormed back to tie the set at 16 points apiece.

The Spy Ponders turned it on again at that point, as they simply wouldn’t allow the ball to fall. Wakefield did a tremendous job to return their volleys time and time again, and at points it seemed like maybe nobody would get the next point. However with the score 16-16 the strength of Arlington’s experience shown through, running off the next four points, before the Warriors got a couple of their own.

Now with the score 20-18 Arlington, Wakefield needed a big finish. It just wasn’t the Warrors day as Arlington went  on to win the set (25-18) with the next five points, taking the match 3-0.

It was an edge-of-your-seat game for much of the match, as Wakefield came from behind a few times and held the lead for a while in the last set, and Coach Trudeau can be happy with the progress she has seen from her side early in the season.

“With a new program they have to feel that urgency, and then you know how to turn it back on the next time,” Trudeau said. “Coming together and wanting to win has been a big change for them. You need someone who can be that go-to person. Maggie Tryder is not the flashiest of our players, but she is consistent, she is making consistent, good, smart plays and that’s what you need.”

She added, “Emma Butler has one of the biggest cannons on the team when she gets ahold of the ball, and Abbie Badgett is the same way. There were some balls that they just didn’t connect on tonight and once they get that groove back look out. I have to say that Jess Barbera came in to play outside and did an amazing job, she was calm, playing smart volleyball and not trying to do too much.”

She also has been impressed with how the girls are coming together as a team and turning to each other for guidance and leadership.

“I’m glad their starting to look to one another and grab that deep breath together and regroup,” Trudeau noted. “We made some young mistakes. We have some young players, and we have to work on that, but it’s to be expected when you start two sophomore setters.”

With just one day to regroup at practice before heading out into competition again, Wakefield will be preparing for its next game this Friday, Sept.18th when it takes on Stoneham.