Warriors defeat Wilmington in the first of four away matches 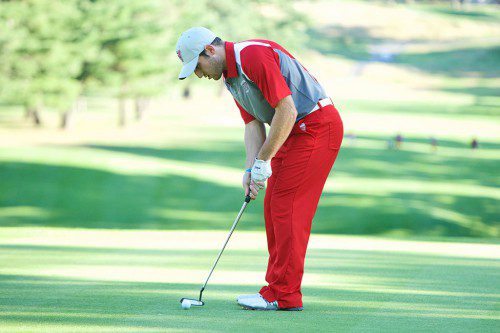 STEPHEN MARINO, a senior, played at number six yesterday against Wilmington and came up short in his contest by a 5-4 score. (Donna Larsson File Photo)

NORTH READING — The Warrior golf team, which is on the road for four straight straight matches in as many days, got the week started off on the right foot as it pulled out a 41-31 victory over Wilmington yesterday afternoon at the Hillview Country Club.

Wakefield is now 2-1 on the season.

“Wilmington is a young team but they play tough on their home course like everyone else does,” said Coach Dennis Bisso. “It was nice to get the win.”

David Melanson, a junior, had one tough hole and scored a 46. But he was able to post a 6-3 triumph at number one.

The Warriors’ number three and four players, juniors Mike Guanci and Tim Hurley, had strong efforts and had the two low scores of the match. At three, Guanci shot a 39 and pulled out a 5.5-3.5 victory. At four, Hurley shot a 37 and posted a 6-3 win.

Wakefield struggled a bit at the fifth and positions, although its two golfers did keep their contests close.

At five, senior co-captain Steven Melanson lost a 5.5-3.5 decision. At the sixth position, Stephen Marino, a senior, was edged by a 5-4 tally.

The contests at numbers seven and eight is where Wakefield pulled away and earned the victory.

At the seventh position, Austin Collard, a junior, came up with a big 6-3 victory.

Kevin Murray, a senior, moved up to number eight and he rolled to a 6.5-2.5 triumph.

“They came up with two big wins for us,” said Bisso. “It doesn’t get any easier. We have Reading today, Winthrop tomorrow and Melrose on Thursday.”

In the two alternate matches at nine and 10, junior Justin Sullivan and sophomore John Evangelista both prevailed by identical 6-3 scores.

Wakefield takes on the Rockets this afternoon at 3:30 p.m. at the Meadow Brook Golf Course.