Golfers seeing it all, even from the roof 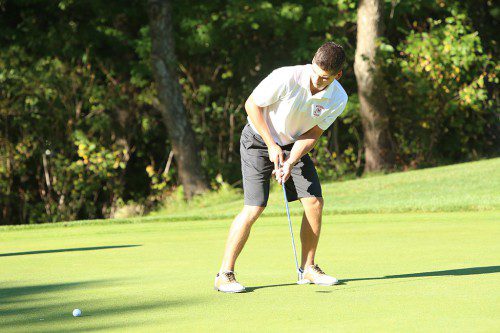 MELROSE—If your senior Matt Cornelius, you’ll probably remember one particular shot for the rest of your life.

Imagine a scenario in which your teeing off during your golf team’s tie and your golfball hits a sprinkler head, ricochets upward and lands on the roof of a clubhouse which is, technically, part of the course. What do you do?

Climb up and swing, of course.

That’s what the senior managed to accomplish on Wednesday, October 7 at Bellevue Golf Course, when he successfully shot from the clubhouse’s flat roof and managed to land the ball on the green, helping preserve an improbable 36-36 tie against a historically strong Belmont team.

According to longtime coach Rick McDermod, it was one of the stranger shots he’s seen. “Usually you get free relief on a shot like that. But as soon as the golf ball hit the sprinkler head, it bounced way up on the roof, behind the green.”

After discussions with the Belmont coach and the course’s golf pro, McDermod gave the Cornelius the nod to climb up and continue. “He got the ball on the green, two- putted and won the hole,” confirms his proud coach. “It wasn’t a win, but it preserved the tie and as they say in golf ‘that’s the rub of the green’.”

It’s been that kind of season for Melrose, who have seen success this season against large and small schools alike. On Friday, visiting Woburn was no match for Melrose, who took five wins against the Tanners in a 40-32 victory behind the shooting of Mike Shea, Justin Crowley, Sean Connolly, Zack Phipps, and Mike Luciano.

Currently shooting in the top sports are 1. Shea 2. Justin Crowley and 3. Drew McGuire. At press time Melrose was slated to host an improved Arlington team at home on Wednesday (post deadline) and will compete in the Middlesex League Shoot Out on Thursday (post deadline), where they will send their top three to represent Melrose. Should Melrose prove victorious against Arlington, they should secure a spot in team Sectionals.

As he guides the team to the final stretch of the season, an always pragmatic McDermod offers simple words of wisdom. “My advice to the kids is usually the same: Play smart and don’t give holes away.”