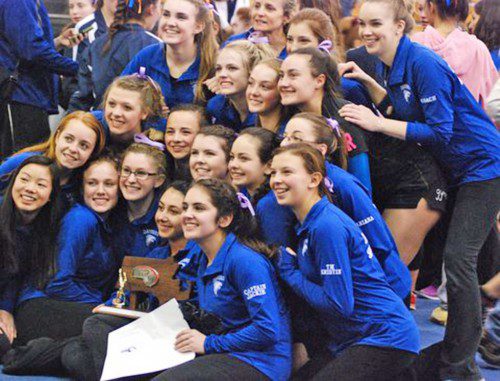 THE GIRLS on the gymnastics team are headed to the MIAA State Tournament on Saturday, Feb. 28 at Algonquin Regional High School. The meet is at 6 p.m. (Courtesy Photo)

NORTH READING — Last Saturday afternoon, the North Reading–Danvers High co-op gymnastics team came in second place in the North Sectionals at Hudson High School. The Falcons had a total score of 141.355. Andover was first at 142.325. There were 13 schools competing.

Andover, the Falcons, Newton South (140.815) and Beverly (140.2) are the four teams that will advance to the state finals this Saturday at Algonquin High at 6 pm.

“I am so proud of them,” stated Falcons head coach Jody Bulger. “Making the state final was our main goal and I am so happy.”

This is the first time in the four years North Reading and Danvers have been together that they have made the finals.

North Reading resident, Julia Valenti, placed ninth in the All-Around with a score of 35.855.

“She had a great all-around,” stated Bulger.

On the bars, Valenti was tied for eighth at 8.95 while North Reading’s Alyson Kelleher was tied for 11th at 8.9.

Freshman Rachel Hill (North Reading) was fourth on the balance beam at 9.175 while Veatch was fifth at 9.1.

“Rachel did an awesome job on the beam,” pointed out Bulger.

Valenti was tied for seventh on the floor exercise at 9.105 while Veatch and Hill both tied for 11th at 9.0. Valenti also tied for sixth place in the vault at 9.2.

Of the eight teams that will compete in the finals, the Falcons are the fifth seed. Barnstable, the top seed, is the favorite.

“The goal will be to finish higher that our seed,” said Bulger.

North Reading-Danvers went 7-1 this season as they came in second place in the league behind 8-0 Beverly for the second year in a row.