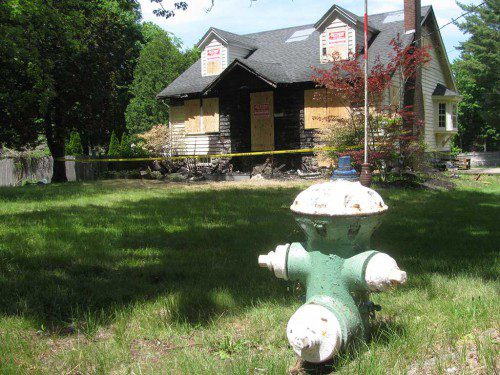 LYNNFIELD — The blaze that engulfed a 1-1/2 story Cape-style home at 844 Main St. early Saturday morning may have been arson.

All four occupants of the home were able to evacuate safely prior to the arrival of Lynnfield’s first responders, who arrived at the scene not long after multiple calls were received for a structure fire around 3 a.m., Lynnfield Deputy Fire Chief Glenn Davis told the Villager.

“Initial reports had possible people trapped in the building. This was an older style 1 1/2-story Cape home,” Davis said, adding that upon crews’ arrival “the fire had pretty good involvement throughout the entire front and first floor, extending up to the second floor.”

Davis was in charge at the scene and immediately struck the second alarm, which brought mutual aid from eight nearby communities, six of which provided manpower at the scene with the remaining two covering both of the town’s fire stations.

Published reports over the weekend indicated that investigators suspect arson may be to blame for the house fire.

Prior to the blaze, a woman from this address was arrested and charged with assault and battery and malicious destruction of property, according to Carrie Kimball Monahan, a spokeswoman for the Essex District Attorney who spoke to the Villager Tuesday.

Monahan said the woman who was arrested lived in the home that caught fire but stated that she was in custody when the fire began. The woman was due to be arraigned Tuesday in Peabody District Court.

“The charges are not in connection with the fire. She was charged with assault and battery and malicious destruction of property Friday night,” Monahan told the Villager. “And from what I understand, the fire started after she was taken into custody, so the police responded to the house because of the report having to do with the assault and battery. She was taken into custody for that,” she said.

Family members’ names have not been released by the DA’s office. The six-room home is owned by William C. Gaffney, according to the assessor’s office.

Davis was impressed by the response time of Lynnfield’s first responders and grateful for the mutual aid provided by eight surrounding communities after he called the second alarm.

“It was our typical response in the middle of the night. We are primarily a call Fire Department still (at night) so we had members coming from home to get the fire apparatus. We didn’t have any delayed response at all. We had a very good turnout for a Memorial Day weekend. I believe we had 19 firefighters on scene from town and we were able to get all four pieces of our apparatus on scene.”

After he transmitted the second alarm mutual aid arrived from North Reading, Wakefield, Middleton, Peabody, Reading and Lynn. This extra manpower ensured that there were between 30-40 firefighters on scene at different times battling the blaze, he said

Additional mutual aid coverage was provided at the town’s two stations by Saugus and Danvers “who handled at least one other call while we were at the fire,” Davis said.

He said the fire was brought under control “within a couple of hours.”

Davis said they did not encounter any problems with either water or apparatus and there were no injuries to any firefighters or occupants of the home.

“There was a hydrant right in front of the house, which assisted us. We had no issues at all. It was just an older house. It did get up into the attic space. It was a very hot fire and it had good possession of the home before we got thee. It was a tough battle for all the members.”

Davis said he could not say whether the house can be salvaged, but it is not currently habitable.

“There is significant damage but I’m not ready to call it a total loss. It is amazing what they can fix nowadays and their insurance adjuster will have to decide that,” Davis said. He added, “The Lynnfield Police were extremely helpful working with the family while we were battling the fire” to ensure that they had a place to stay.

As for fighting the fire, Davis said the teamwork displayed was second to none. “Everything went extremely well. We have a lot of new, young members on the department and everybody worked extremely hard in the middle of the night on a Memorial Day weekend. Everybody really did a fantastic job and got the fire out without anyone getting injured.

“Obviously, mutual aid is a great system. We all depend on it in the area and good mutual aid around us to be able to be successful in battling the fire also,” Davis said.

“The ladder crew was able to get the tower right to the roof to assist us to put a ventilation hole in the roof to allow us to get into the second floor to fight that fire,” Davis said.

The roof ventilation holes enabled the firefighters to “make a very aggressive interior attack and we were able to successfully extinguish the fire by doing so,” said Davis.

“Every engine, every piece of apparatus, has a specific job and everybody did a fantastic job,” he said.