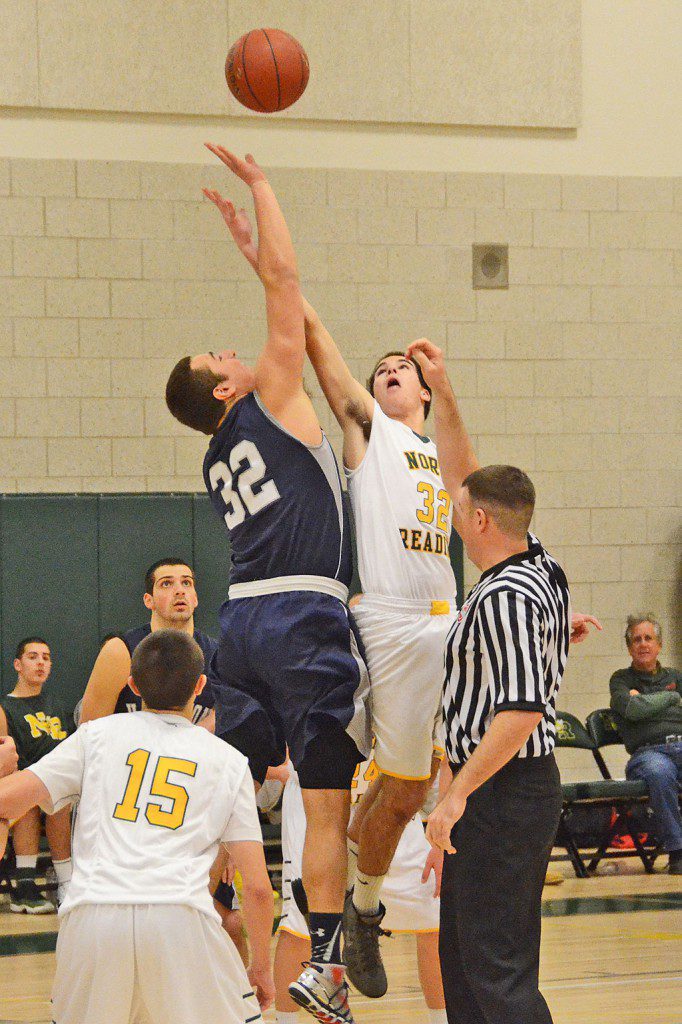 NORTH READING — The Hornets exploded for 33 points in the fourth quarter of the boys’ basketball game to earn their first win of the season over the visiting Triton Vikings 62-40 in their home opener on Dec. 19.

Juniors Justin Dorosh and Adam Goldstein were outstanding, both recording double-doubles. Dorosh had 19 points and 10 rebounds and Goldstein added 21 points and 11 rebounds.

Both offenses struggled in the first half. North Reading fared better than Triton in the first quarter, and thanks to two big threes from Goldstein, took a 9-0 lead at the 2:55 mark. The Vikings eventually got on the board at 2:13 and the lead was 10-4 after one.

Both teams remained cold from the field in the second quarter and the Hornets took a 17-12 lead at the half.

Early in the third North Reading still maintained a five-point lead at 22-17. But Triton responded with a 10-1 run and by the 1:20 mark had taken a 27-23 lead. Fortunately, the Hornets closed the quarter with three buckets to tie it at 29-29.

The floodgates opened in the fourth. North Reading blitzed the Vikings, outscoring them 33-11 in the quarter en route to the easy 62-40 victory.

The Hamilton-Wenham Generals soundly beat the Hornets in their matchup on Dec. 22 by a score of 72-38. Junior Justin Dorosh was the only Hornet in double figures with 12 points.

The Hornets looked to be in trouble from the opening tip. They did manage to stay in the game thanks to strong defense. After a three at the buzzer by junior Adam Goldstein, North Reading was only down 17-13 at the end of the first quarter.

Early on in the second quarter the Hornets had cut the lead to 17-16. But the offense went cold and the Generals closed the quarter on an 18-5 run. By halftime the deficit had ballooned to 14 points at 35-21.

Offense outgunned in 2nd half

The offense completely fell apart in the second half. North Reading only had four field goals during the entire half and was outscored 37-17. By the start of the fourth quarter the Generals were deep into their bench as Hamilton-Wenham cruised to the 72-38 victory.

Results of the Kipnes Holiday Tournament and Tuesday’s game against Notre Dame Cristo Rey, played after press time, will be published next week. The Hornets will travel to Masconomet to face the Chieftains on Saturday, Jan. 3 at 1 p.m. and head to Pentucket on Tuesday, Jan. 6 at 6:30 p.m.