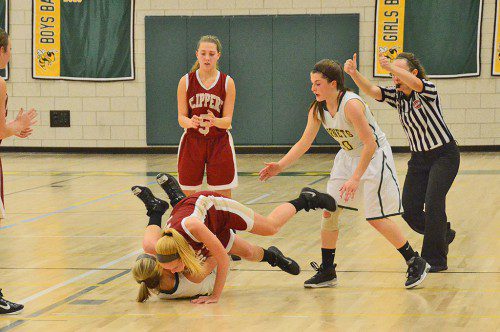 BYFIELD — The Lady Hornets basketball team went on the road for the first time this season and got past the Triton Vikings 37-28 on Dec. 19. Junior Jess Lezon was huge inside with 23 points and 11 rebounds.

North Reading got off to a quick start in the opening quarter. Midway through the first they led 7-0. Triton only had one field goal the entire quarter and the Hornets led 9-2 after one.

The Vikings fought back in the second quarter and at the 3:02 mark the North Reading lead was cut to 11-9.  But the Hornets outscored Triton 7-1 the rest of the quarter. After a made free throw by Lezon, with 18 seconds left, the lead was 18-10 at the half.

The Hornets came out of the half on fire. They opened the third quarter outscoring the Vikings 9-3 and at the 2:19 mark went up by 14 points. The Vikings tried to come back but still found themselves down 29-20 at the end of the quarter. North Reading maintained a double-digit lead for most of the fourth and coasted to the 37-28 victory. 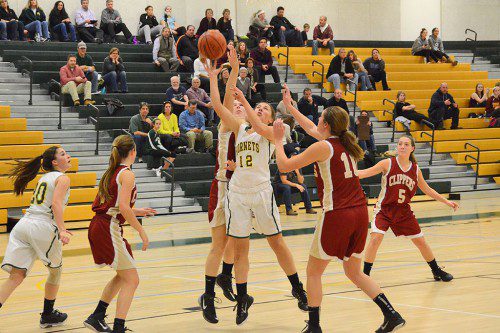 North Reading continued its strong start to the season with a 53-40 road victory over the Hamilton-Wenham Generals on Dec. 22. Senior captain Frankie Elliott led the way with 15 points. Jess Lezon had her third straight double-double with 13 points and 11 rebounds.

It was a tight first quarter with neither team holding more than a three-point lead. Midway through the first the Hornets were up 4-3. They continued to maintain a lead, and after a late bucket by Lezon, North Reading took a 12-9 lead after one.

North Reading went up by as much as six points in the second quarter but still couldn’t shake the Generals. With the score 23-17, Hamilton-Wenham hit a three with 22 seconds left in the half to cut the lead to three. But with two seconds remaining sophomore Katerina Hassapis scored to give the Hornets a 25-20 halftime lead.

In the first half of the third quarter the lead had ballooned to 35-27. The Generals cut into the lead and by the end of the quarter the Hornets were only up 41-37.

North Reading blew the game open in the fourth. After the Generals cut the lead to two early in the quarter the Hornets closed out the game. They ended the game on a 12-1 run and cruised to the win.

Results of the Whittier Tech Christmas Tournament, played Sunday and Monday after press time, will be published in next week’s edition. The Lady Hornets will host Masconomet on Saturday, Jan. 3 at 1 p.m. and Pentucket on Tuesday, Jan. 6 at 7 p.m.