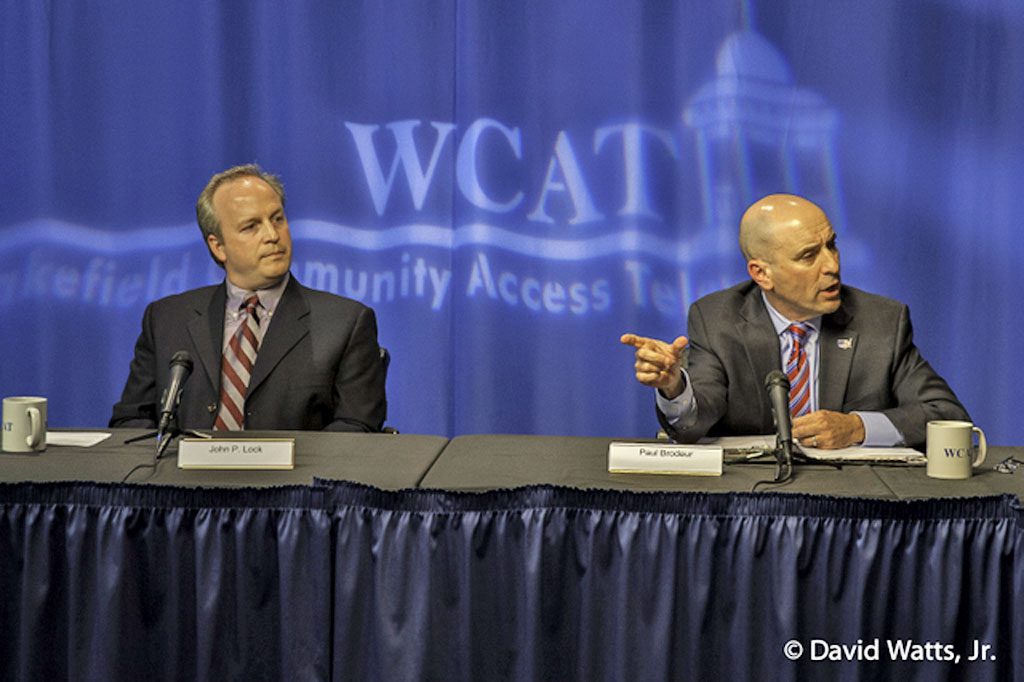 WAKEFIELD — Both candidates running for the 32nd Middlesex District seat in the House of Representatives want to keep casino gambling in Massachusetts but incumbent Rep. Paul Brodeur and his Republican challenger John Lock disagreed on most other issues as they debated last week at Wakefield’s WCAT studios.

The 32nd Middlesex District includes all of Melrose, Wakefield precincts 3, 4, 5 and 6 and a small part of Malden.

Brodeur, a Melrose Democrat, has held the seat since 2010. He has previously served as General Counsel for the Massachusetts Office of Elder Affairs and as a prosecutor with the Middlesex County District Attorney’s office.

John Lock lives in the Greenwood section of Wakefield. He is a research scientist with advanced degrees from MIT.

The candidates fielded questions from a press panel that included representatives from the Wakefield Daily Item, the Melrose Weekly News and WCAT. WCAT producer David Watts Jr. served as moderator.

Regarding Ballot Questions 3, which would repeal the law allowing casino gambling in Massachusetts, Lock said that he would favor keeping the current law in place.

“I don’t think it’s a silver bullet for the economy,” Lock said, “but I do welcome the jobs it will take to build the casino and to maintain it.”

“You can’t base your whole economy on a single industry,” Brodeur said. “But it can be a piece of a diverse economy like we have in Massachusetts. It’s a jobs issue.”

The candidates were asked about abuse of Department of Transitional Assistance programs like EBT.

“Absolutely I think there’s a lot of abuse,” Lock said. He accused Beacon Hill Democrats of obstructing efforts to audit the abuse, limiting the data available. He cited instances of high individual EBT balances and thousands of mailings to EBT recipients coming back as undeliverable. He accused Brodeur of voting against efforts to tighten up identity requirements for those accessing social benefits.

“We need to have these programs for people who need them and who are who they say they are,” Lock said.

Brodeur countered that the Legislature has done “a remarkable job building comprehensive reform of the way we deliver welfare.” He cited measures passed that require checks on EBT balances every 90 days as well as cross-checking of data to reduce waste, fraud and abuse in the system. He also said that measures have been put in place to help people get off welfare.

The candidates also differed on ballot Question 1, which would repeal the automatic annual increases in the gasoline tax based on the rate of inflation.

Brodeur said that he supported the measure because a robust transportation system with safe roads and bridges is essential if the economy is to grow. He said the law would assure a reliable revenue stream locked into transportation spending. He cited several bridges in the area that were in need of repair.

Lock had a different view.

“Everyone understands the need to maintain roads and bridges,” Lock said. He pointed out, however, that Question 1 does not repeal the gas tax, only the automatic annual increases linked to inflation. The automatic increase, he said, “amounts to taxation without representation” and takes legislators of the hook with respect to voting for future tax increases.

Regarding the opiate addiction crisis, Lock said that legalizing marijuana for recreational use would remove it as a stepping stone to opiate abuse because pot users would no longer need to go to illegal drug dealers where they can be exposed to harder drugs.

Brodeur said that opiate abusers often start with prescription drugs and move on to heroin. He cited measures passed in the House increasing access to treatment. Brodeur said that it troubled him to hear kids talk about marijuana as risk-free. “We need to view the drug problem as a public health problem, not a criminal justice problem,” Brodeur said.

Asked how Beacon Hill can become more transparent, Brodeur cited measures that the Legislature has already taken, such as improving its website, posting all hearings and agendas and inviting the public into sessions. He admitted that the state could do a better job leveraging technology. He cited his own efforts to be accessible and out in the community.

Lock insisted that Republicans have been the real champions of transparency on Beacon Hill. He pointed to measures that he said the GOP has pushed to increase transparency, such as making all committee votes public. “Democrats time and time again have voted that transparency down, including Rep. Brodeur,” Lock said.

WCAT will re-air the debate between now and the Nov. 4 election. The video will also be posted online for on-demand viewing. Go to wcatwakefield.org for more information. 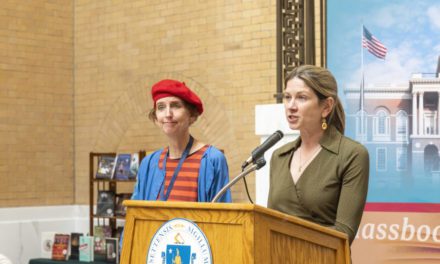