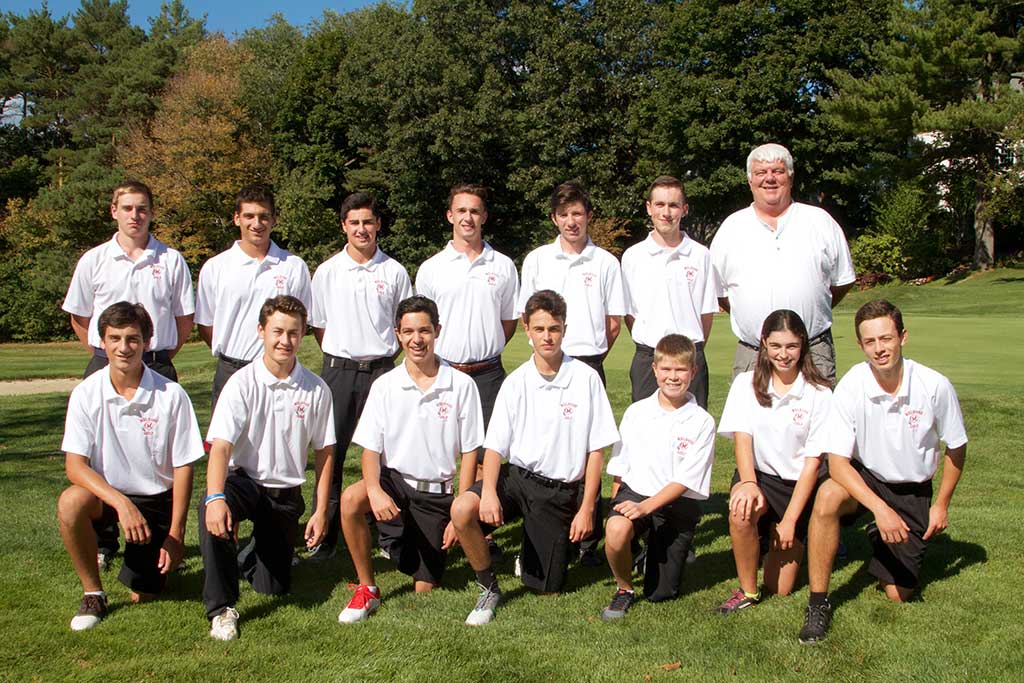 THE MHS golf team ended their season on a high note: an individual appearance at the Div. 2 North finals. (Donna Larsson photo)

MELROSE — The Melrose High golf team may have finished an up-and-down season last week but it culminated in a Division 2 North appearance for junior shooter Zack Farrell, who qualified to represent Melrose at Far Corner Golf Club on Oct. 24.

Farrell played in a four man rotation with Wakefield, Woburn and Winchester shooters and shot an 85. According Melrose coach Rick McDermod, he held his own. “He had a great back nine and missed by a few strokes, but represented us nicely.”

Melrose previously finished their season against rival Wakefield on Oct. 12 at Thomson Country Club. There Melrose fell to the Warriors, 41-31. According to McDermod, “We were in it, but not threatening to win necessarily.” In the match, Melrose saw great efforts from their 5-8 shooters. “You can’t really predict these things,” chuckles the coach. “I can’t coin this phrase but I’d say we’ve been ‘consistently inconsistent’ all season.”

“We’re a very young team,” he continues. “And we have a good number returning. They will improve but so will the other teams so we hope to see some practice on the offseason.” One of those players returning is Farrell, a bright spot for Melrose.

Until then, the coach says so long to three of their top players: his seniors captains Drew McGuire and Justin Crowley and last year’s M.L. champ Mike Shea. Two of of them, Crowley and McGuire, have been with McDermod since freshman year. “They’ve been around so long and will be hard to replace. They’re terrific kids and both their little brothers will be back. I’ve enjoyed seeing their game grow over the years.”

During the last stretch of the season both Farrell and Crowley swapped appearances in the #1 spot. And while Melrose didn’t put many in the win column, they managed to surprise the coach along the way. “Tying Winchester this year was something I certainly didn’t anticipate. It was a fun season with them, they’re a great group of kids.”