Melrose brings the thunder in 33-13 victory over Woburn

Team travels to Gloucester tonight for 1st playoff round 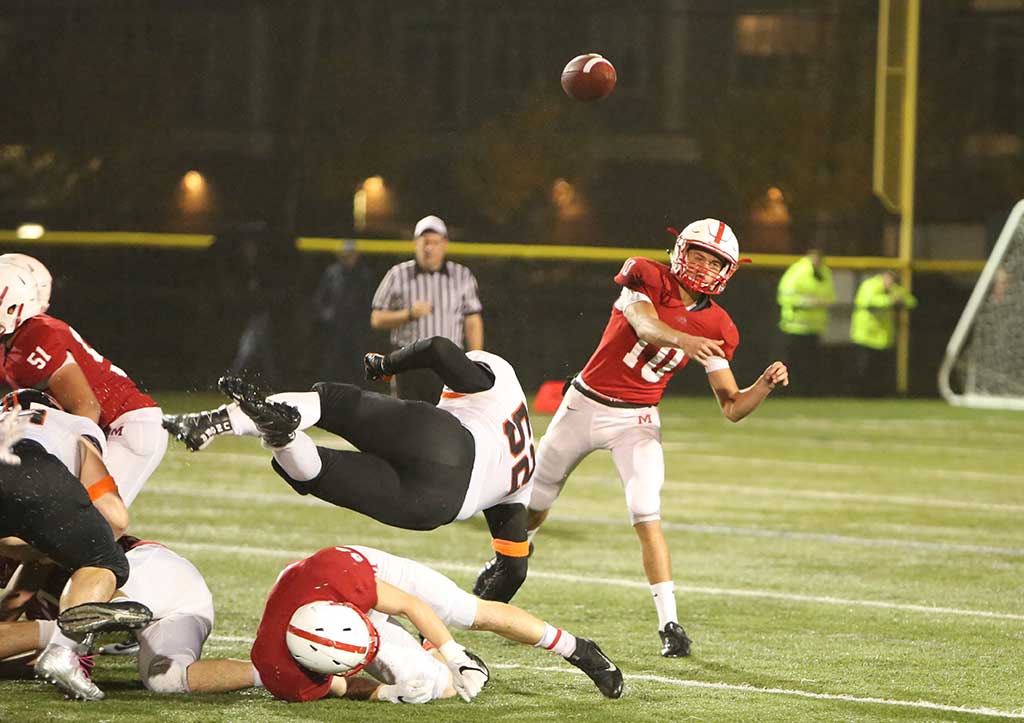 MELROSE QB Jack May’s threw for a second half touchdown that helped Melrose run away with a win over Woburn, 33-13 last Friday. (Donna Larsson photo)

WOBURN — The Melrose Red Raider football team picked up their second win in a row after a 33-13 rout over Woburn at a rainswept Fred Green Field on Friday, Oct. 21. The victory ends their regular season at 5-2 overall as the team prepares to play Gloucester (6-1) tonight on the road in the opening round of the Div. 2A North playoffs. Game time is at 7 p.m.

Mother Nature ended last Friday’s contest a few minutes early when lightning forced officials to call the game for good, with just 4:00 left in the contest and the Tanners facing a 20 point deficit. With the loss, Woburn’s playoff hopes were eliminated. Melrose meanwhile, drew a fifth seeding in the MIAA bracket on Sunday and will travel to Gloucester to play the 6-1 Fishermen.

Melrose senior running back Mike Pedrini (125 yards, 3 TDs) had another impressive performance on Friday, tallying three touchdowns over the night (15 for the season) and carrying the ball 30 times, nearly impossible to take down by Woburn defense. Melrose QB Jack Mays (3-6, 30 yards passing) also had a strong game. Despite downpours limiting his air game, he connected with Josh Roderick on a TD pass and ran for a total 60 yards.

“I thought we played well and ran the ball well. Mike [Pedrini] did a lot for us, carried the ball like 30 or so times,” said Melrose coach Tim Morris. “I thought our offense was more consistent in this game and our O-line was as well.” Morris also credited Mays performance. “He really can run well when given the space. He’s grown into the role and become a leader.”

Melrose hit pay dirt with the efforts of freshman kicker Chris Cusolito who hit 3-4 of his point-after attempts, with the exception of a fourth quarter block by the Tanners. “It will be nice to have him around for a while,” quips his coach.

Melrose has proven to be a second half team this season and proved that by scoring nearly 20 unanswered points after halftime, when they went into the break with only a slight edge of 14-13, after Woburn touchdowns by Tyler Parrish and Tyler Hayden. But their 19 play opening drive in the second half drained the clock, behind the running of Pedrini and Mays, who collectively brought Melrose to the 1 yard line. Pedrini ran it in to make it a 21-13 game and the team never looked back. Pedrini’s previous touchdown came on a 9 yard scamper in the first quarter that gave Melrose a 7-0 early lead.

Woburn saw solid efforts by running back Tyler Hayden. But by the second half, they hurt themselves with a series of turnovers that took the Tanners out of the game. They also faced a barrage of pressure from Melrose defense, including a great night by Mike Sickler, who had a number of sacks against Tanner QB Jake Bridge, and Colin Casey and Patrick Whelan. Mays successfully connected with Colin Kiernan and Steven Abbott over the night and those two came up big in the second half, recovering fumbles that allowed Melrose to score their fourth touchdown, a pass to Josh Roderick that gave them a 27-13 lead with just 5:48 left in the game.

Melrose’s Adam Caffey picked up his first varsity touchdown in the final play of the game. Just as a thunderstorm erupted, Caffey intercepted a Bridge pass for a 43 yard return into the end zone and a 33-13 final score. And while the game ended abruptly (a point after wasn’t attempted) and players and fans made a quick exit off the field, nothing could douse the excitement of the fans and team to secure one more victory before playoffs.

Next on tap: 6-1 Gloucester, a team whose only loss comes at the hands of Beverly. According to Morris, while a bit of a mystery, they’e historically a strong team. “They’re tough, always has been. They spread the ball around, run a lot. They might try to lull you to sleep. We’ll have our work cut out for us.”

Friday night’s opening Div. 2A playoff football game against Gloucester pits Melrose versus a team they haven’t had much exposure to. But as Melrose coach Tim Morris acknowledged this week, Gloucester is a “historically strong” team. And the Fishermen have their own answer to Mike Pedrini: Christian Sanfilippo, who amassed 265 rush yards and five touchdowns in Gloucester’s 49-7 win over winless Saugus, which set the program’s all-time rushing record.

Gloucester lost several seniors last year, particular on the lines, but return Kyle Aquipel at middle linebacker and Eric Cameron on the outside. The Fishermen should prove a tough defensive team – they’ve allowed less than 10 points in two of their last three contests – and they will likely run the ball and kill the clock, which might make Friday’s game a low scoring contest.

However, the strength of Gloucester’s schedule does not match that of Melrose, with most of their wins coming against sub .500 teams like Saugus and Winthrop. Their 6-1 record doesn’t hold the same weight as Melrose’s 5-2, and Red Raider defense has been mighty stingy these days.