It’s a wrap for the WMHS girls’ volleyball 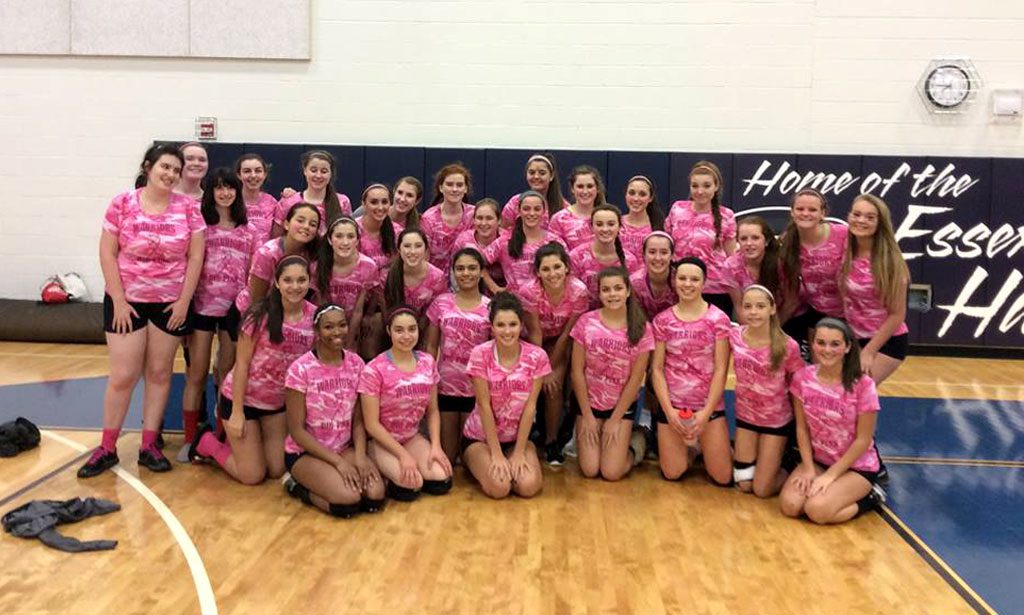 THE WARRIOR girls’ volleyball team took part in a Dig Pink scrimmage against Essex Tech on Tuesday afternoon at the vocational school in Middleton. Wakefield lost the scrimmage, 3-2, but took part in a fundraiser for a worthy cause — breast cancer awareness.

MIDDLETON — The Wakefield Memorial High girls’ volleyball team could’ve ended the season on a winning note had its 3-2 triumph over Wilmington been the Warriors last match of the season. But since that come from behind victory, Wakefield suffered two straight losses. Wakefield suffered 3-0 setbacks against Melrose last Friday night at Melrose High School and Burlington on Monday in its home finale at the Charbonneau Field House.

Wakefield finished the regular season with a 3-16 overall record and 2-14 in the Middlesex League Freedom division.

The Warriors capped off 2014 with a scrimmage against Essex Tech which was for a good cause. Wakefield took part in another Dig Pink fundraiser for breast cancer awareness.

If the Warriors could have ended their season with the victory over Wilmington, that would have been the ideal way to wrap up a season of hard work. However, that was not possible. After the intense win against Wilmington, the Warriors faced Melrose — the first place team in their division and M.L. Freedom champs.

Wakefield walked into the gym without the fire it needed to compete with the Red Raiders. It was not the best mental matchup for the Warriors. The Warriors made mistakes, missed serves and overall did not play well as a team.

After that match, there was nothing that really needed to be said, because it was not even representative of the team Wakefield has become said Coach Nicole Trudeau.

Then, in Wakefield’s last league match of the season, it faced Burlington on Senior Night. Wakefield honored the five Burlington seniors as well as its senior captain Julia Cleary.

In keeping with team tradition, the girls pulled together the Senior Night decorations and festivities and they did a great job. Trudeau was sad to say, “goodbye” to Jules because she has been such a solid player since her sophomore year. She had a very hard job this year as the lone senior on the team, but she handled it with grace and stepped up to the plate. Julia is successful in her game, in the classroom and Trudeau is sure she will do great things in her life.

Wakefield rounded out the season with a Dig Pink scrimmage (for breast cancer awareness) against Essex Tech which ended in a 3-2 loss Tuesday afternoon in Middleton.

This was another five-set match that kept the Warriors on their toes. Wakefield saw Essex Tech earlier in the season (in a scrimmage) and came out with a victory. The Hawks have really improved over the course of the season and will be moving on to the playoffs on Thursday.

The highlight of the night was watching sophomore Jen Synan play in her very first match and earn an ace. Trudeau said that she believes you never forget your first ace in volleyball and she doesn’t think anyone in that gym will forget the look on Synan’s face as she served the ball.

Wakefield dropped the first set, won the next two and then dropped the fourth. The Hawks came out ahead at the beginning but Wakefield caught up. The Warriors caught fire too late in the set and since it is only played to 15, Wakefield ran out of points.

It was a great match for a great cause and the Warriors all walked out with smiles on their faces.

Trudeau gave credit to junior Liz Germino for her defensive skills. She has been on fire the entire second half of the season and should be very proud of her progress.

Emma Butler continued to lead the team last night with some great kills down the line.

Mackenzie Story switched from the middle to the right side and helped out with scrappy defense. It’s always hard to switch positions and Trudeau had pretty much switched everyone around this year. The girls have fought through the changes and shown their coach they are ready to take the court as a whole new team next year.

“All in all, this season did not end up the way we had imagined but the program is further ahead. I have a ton of confidence in the freshmen and there is a tremendous amount of pressure on the classes of 2017 and 2018 to work hard in the off season and come back ready to make a difference for this program next fall,” said Trudeau. “We are only losing one senior but I always consider every spot open for the following year. Sports are a representation of life in general. You have to practice like you want to play and play like you want to win.

“When you leave everything you have on the court, you can walk away knowing you have done the best job you can. These girls are so much better than two years ago when we first came together. We all need to remember that this program is only two years old,” added Trudeau. “We are playing in a very tough conference against programs that have been around for years. Our record of wins and losses does not reflect the growth of the program. There’s an interest in the sport from local middle schoolers, our girls are getting involved in some amazing charitable events and we saw 300 percent improvement over last year’s record.

“I took this position because of my love for volleyball and with the goal of giving Wakefield girls the opportunity to play this great game,” concluded Trudeau. “I’m grateful to the three alumnae who started the program (Kyle Rush, Jessica Vozella and Jillian Chan — Class of 2012), proud of the girls who have taken the chance and confident in the future of this program. All wins and losses aside, I am proud to say I coach this great group of players.”

Trudeau would also like to see more young women get involved in the sport in the town of Wakefield. For information on how to get your daughter involved in youth volleyball programs please e-mail [email protected]