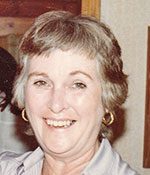 BEVERLY — Jean A. (Morehead) Glynn, 86, of Beverly and formerly of Melrose, died at the Beverly Hospital on Dec. 25.

Jean was born and raised in Malden and attended Malden High School. She resided in Malden until 1961, Melrose until 1982 and Beverly for the past 32 years.

Jean was a homemaker, artist and former owner of an art studio in Melrose. She enjoyed spending time at Lake Winnipesaukee and had many cultural and political interests.

The most important part of Jean’s life was spending one-on-one time with her grandchildren.

Visiting hours were held at the Gately Funeral Home, 79 West Foster St., Melrose on Tuesday, Dec. 30, from 9 a.m. to noon, followed by a graveside service at Wyoming Cemetery, Melrose.