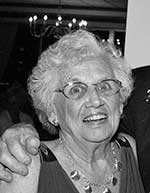 MELROSE — Jeanne A. (Jacobsen) Brown, 86, of Melrose, died at the Massachusetts General Hospital in Boston on Aug. 16.

She was born Aug. 7, 1930 at Boston City Hospital. She grew up in Cambridge and attended St. Mary High School, run by the Sisters of Notre Dame, where she graduated in 1947. She always enjoyed her class reunions.

Times were tough then for her large Catholic family of five children. She went to work for the New England Telephone Company, ‘New England Tel’ she called it. She continued to work there through the merger with AT&T and was a member of the New England Pioneers of America.

At the age of 22, Jeanne met a young and very ‘handsome’ U.S. Marine, Walter Brown, in June 1950 at a church fair. She spent the next 65 years happily married to Walter, living most of their years in Melrose. Jeanne and Walter participated in many activities held by the Harold O. Young VFW Post 2394, where Walter is a member and Jeanne was a member of the Lady’s Auxiliary.

Jeanne was a great homemaker while her children, Debi and Walter Jr. grew up in the public school system in Melrose and was active in the school PTA. Jeanne enjoyed ice skating at Mount Hood in the winter and tried very hard to have a green thumb in the spring. She did love flowers. She would take adult education classes with her dear friend Ann Spartichino in pottery making and cooking classes. Jeanne and Ann were very close friends and the families would go on family day outings and vacations..

Jeanne’s own children were happiest on those days she made her famous Whoopie pies and her perfect spaghetti sauce that everyone loved and would ask for.

Jeanne was happiest when she was in the company of and cooking for her grandchildren. She adored Kevin, Scott and Kristen. They were her light and they returned that light to her. Jeanne always remembered the birthdays, looked forward to school events for the kids and attended sports events as much as she could visit — volleyball for Kristen, baseball for Scott, tennis for Kevin. Jeanne did enjoy being an avid supporter and faithful spectator for most sports, especially enjoying U.S. Tennis and the Red Sox.

Jeanne and Brownie aspired to retire as early as possible, having worked very faithfully and hard. They would make the trip to Boca Raton as snow-birds for 10 years, committing to 6 months in Florida and 6 months in Melrose. They did this for 20 years and recently returned fulltime to Melrose, back to the ‘Red House.’

Jeanne was outgoing in the sense that she never held back her opinion and when she got herself all dressed up for any event she was usually the life of the party. Frequently ending an evening with her off tune, but warm and sincere rendition of ‘God Bless America.’ It was how her friends always knew the party was over and now her spirit lives on.

Jeanne was the beloved wife of Walter J. Brown Sr. for 65 years. She was the loving mother of Deborah J. Brown and Walter J. Brown Jr., both of Florida. She was the mother-in-law of Lisa E. Masters of Wakefield. She was the caring sister of Carl Jacobson of Massachusetts, Anne Jones and Lois Johnson, both of Florida and the late Margaret Downs. She was the cherished grandmother of Kevin Brown and his wife Elvira of Pennsylvania, Scott Brown and his wife Chelsea of New York and Kristen Rynerson and her husband Robert of Florida. Special friends of Kate Lombardi and Paul Dybdahl and Robert and Rita VanKirk, all of Melrose. Also survived by many nieces, nephews and dear friends.

In lieu of flowers, contributions may be made to Sisters of Notre Dame, 30 Jeffrey’s Neck Rd., Ipswich MA 01938. To sign online condolence visit www.gatelyfh.com.