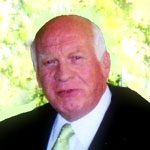 John was born in Pittsfield on November 13, 1939, one of three sons of Mayflower descendents, the late Dr. John T. Cinella, and Jane (Clark) Cinella. Raised in Lee, John graduated from Lee High School and was the president of the Class of 1957. He was a three-sport athlete, serving as co-captain of three sports and played quarterback for the Lee High School football team. He was a member of the All-Century Team in high school, and received various awards for his athletic achievements.

On August 22, 1964, he married the love of his life, Rosemary Sinopoli, in Pittsfield and settled in Melrose to raise their three sons.

John set the pace at Boston College for his younger brothers, Tom and Ted who graduated in 1962 and 1964, respectively. He received his bachelor’s degree in History and Government with the Class of 1961 and later his juris doctor from New England School of Law in 1965 where he again served as class president.

John began his working career in the Department of Revenue for the Commonwealth of Massachusetts, Special Investigations unit. He then joined the Melrose Law Office of James Killam in 1968. For over 40 years, John practiced law in the community, sharing his passion, expertise, and knowledge in the legal field with many Melrose residents.

After leaving the Board of Alderman in 1979, he was the proud recipient of a special resolution honoring his attendance at 218 consecutive board meetings, never missing a meeting.

John also served as City Solicitor from 1992 to 1997, under then-Mayor and longtime friend Dick Lyons. John loved the City of Melrose, and felt a strong connection and deep desire to make it a better place to live. For many years, he was a friendly and familiar sight walking in downtown Melrose and was strong supporter of many worthy organizations and events.

Combining his love of sport and the City of Melrose, John served as president of the Churchill American Little League for many years and served as coach of the White Sox. He volunteered his time in support of the program, and was instrumental in making the league a success.

Although he became a part of Melrose, John never forgot his roots in Lee, Massachusetts. He returned often to see his family, friends and to support the works of the Lee Historical Society. With his quick wit and dry sense of humor, John made many lasting relationships and was a good friend to many over the years.

John’s other interests included collecting stamps, artwork, antiques, and his favorite Valentine’s Day cards. He loved cooking, shopping, and later in life adopted fishing as his favorite hobby. He enjoyed family vacations to Sandwich where he could spend time with his family and go fishing in the canal.

John had many passions in life, but first and foremost was his love of family. He was a devoted husband to Rosemary, loving father of three, grandfather to five, and a loyal brother. With a big heart, he was always ready to offer his help, and provided support generously. John will be lovingly remembered as a great source of strength, love, and laughter by his family.

Relatives and friends will gather in honor and remembrance of John’s life during visiting hours at the Robinson Funeral Home, 809 Main St., Melrose on Sunday, November 2 from 2 p.m. to 7 p.m., and again on Monday morning at 9 a.m. before leaving in procession to St. Mary’s Church, Herbert Street, Melrose where his funeral Mass will be celebrated at 10 a.m.