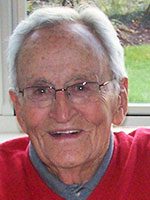 Jack was born on May 14, 1924 in Malden, Massachusetts to the Honorable Maurice R. Flynn and Nellie (Powell) Flynn. He graduated from Malden High School in 1942. Jack attended Harvard College, then enlisted in the United States Navy where he served during World War II from 1943-1946. He was a member of Harvard Class of 1946 and Boston College Law School Class of 1950.

During the course of his career, Jack practiced law in Boston, Cambridge and Malden focusing mainly on general practice of law, both civil and criminal and specializing in federal and state housing and development programs. In 1962, he was designated by President John F. Kennedy to serve as the director of the Federal Housing Administration for Massachusetts, a position he held until 1970. He retired from the law business in 1992.

Jack was a member of numerous civic, charitable and veterans organizations including; The Malden Legion Veterans of Foreign Wars, Knights of Columbus, Malden Elks, charter member of Malden Moose, Chairman of the Malden Cancer Crusade in 1960.

For 42 years, Jack made his home in Melrose and was a member of the Incarnation Parish. He enjoyed golfing, spending time telling stories about his happy memories on Long Beach in Gloucester MA, reading, swimming, playing cards, and most of all, celebrating and spending time with his family. He touched the hearts of everyone he met.

Jack is survived by his beloved wife of 62 years, Alice (Dorn); two daughters, Elizabeth Browne and her husband Stephen of Georgetown, and Deirdre Petricone and her husband Joseph of New Hartford, CT; two sons, Stephen of Salem, MA and Matthew and his wife Virginia of Wakefield; and seven grandchildren: Shelagh and Bryan Browne, John, Katie and Ian Flynn and, Cecilia and Daniel Petricone. He is also survived by several nieces and nephews. He was predeceased by his son John W. Flynn, Jr.

Visitation will be held at the Gately Funeral Home, 79 W. Foster St., Melrose, on Saturday, Oct. 24, prior to the Mass from 9:30-11:30 a.m., followed by a Mass of Christian Burial in the Church of the Incarnation, 425 Upham St., Melrose at 12 noon. Relatives and friends respectfully invited to attend. Burial in Wyoming Cemetery, Melrose.

In lieu of flowers, kindly send contributions in his name to the Malden High School Scholarship, Inc. (which he served as Trustee for over 30 years), c/o Eastern Bank-R Wallask, 605 Broadway LF41, Saugus, MA 01906 or to the Pine Street Inn, 444 Harrison Ave, Boston, MA 02118.