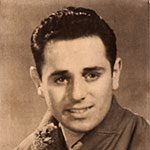 MELROSE — Joseph E. Costanza, 96, passed away at his home in Melrose on Nov. 7, surrounded by his loving family.

Joseph was born in Malden on June 19, 1918 to the late Nicholas and Mary (Durante) Costanza.

He was raised in Malden, attended Malden schools and has been a resident of Melrose since 1944.

He served his country with pride in the U.S. Army during World War II. Joseph was a decorated veteran of World War II, serving in numerous campaigns during the war, including Normandy, Northern France, Rhineland, Ardennes and the Battle of the Bulge, to name a few. He was a Bronze Star recipient.

Mr. Costanza owned and operated Costanza Hot Top Company in Melrose for many years. He was a very hard worker throughout his entire life and his family meant the world to him.

He was a former member of the American Legion, loved the Patriots, enjoyed watching the Red Sox and always looked forward to his “Happy Hour” every day.

Mr. Costanza was the beloved husband of 54 years to Jeannette R. (Gallezzo) Costanza. He was the devoted father of Joseph E. Costanza Jr., Lynnette Von Kriegenbergh, Judith T. Gallant, all of Melrose, Cheryl L. D’Amore and her husband John of Saugus and the late Nickolas Costanza and John Melchionno. He was the loving grandfather of Anthony, John Anthony, Marc, Jeannette and Catherine. He was the cherished great-grandfather of Ariana, Joseph, Samuel, Noah, Asher and Max. He was brother of the late John, Theresa, James, William, Paris, Gino Costanza and Vera Snell. He is also survived by many nieces and nephews.

Burial with military honors at Wyoming Cemetery in Melrose.

In lieu of flowers memorial contributions may be made to a charity of one’s choice. To send a message of condolence please visit www.gatelyfh.com.