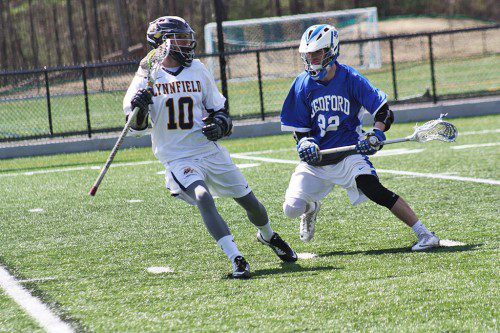 LYNNFIELD — The Div. 3 North Tournament in boys’ lacrosse began on Monday for the LHS Pioneers as the fifth-seeded squad hosted 12th-seeded Saugus in the torrential June 1 rain at Lynnfield High School

The Pioneers came in riding an 11 game winning streak and looked to continue their roll against the Sachems. It was no contest really as Lynnfield got the upper hand from the opening whistle and streaked to an 18-2 first round victory.

The win is the 12th straight for Lynnfield (15-5) and it is moving onto the next round to face Mystic Valley on Wednesday. That quarterfinal game was played at 5 p.m. on Wednesday, June 3.

Head coach Joe Papagni was pleased that his team kept the wins coming by playing their game.

Lynnfield dominated possession and notched the first goal at 10:32 as Jonathan Knee got the scoring started with his first of two goals.

“He could have had more but he knows when enough is enough,” his coach said after the game.

The Pioneers went on to score five more goals without rebuttal from Saugus and, at the end of the first quarter, Lynnfield led 6-0.

In net for Lynnfield, Jack Ganter was a big reason why the Sachems were unable to light up the scoreboard. Saugus seldom got a quality look at Ganter but when they did he shut the door, making 14 saves in the game.

“He’s just solid,” the coach said of his goalie. “They try but they’re not going to score on him. The defense played great, they aren’t going to get through that defense. (Max) Robert played great for us, he anchored the defense,” said Papagni.

Lynnfield got a huge night from Chad Martin as he finished with six goals including two in the first and two in the second quarter.

Pat Garrity took control in the midfield for the Pioneers, with two goals to his name and eight assists.

Alex Soden had another strong outing for Lynnfield with four goals to his name.

Coach Papagni was pleased to have Dan Sullivan back in the lineup after he had been out with an injury.

“Our leading scorer for the past three years is now back, he played a little bit today. We’re slowly getting him a little more time. That’ll give us another kid for this stage of the season.”

Lynnfield went on to score five goals in the second quarter before Saugus finally broke the ice.

The Pioneers got the goal back before halftime and held a 12-1 lead at the break.

The third quarter didn’t offer any respite from the pouring rain or from the onslaught of offense from Lynnfield.

Matt Miller got the scoring going for the home team with just about 20 seconds off the clock in the third quarter. Soden scored 130 seconds later after Lynnfield controlled the face-off and by the time a minute had passed, the score was 14-1.

When a game gets out of hand on the scoreboard, it often boils over down on the field. Just after the face-off following Soden’s goal, some Saugus players took exception to Lynnfield’s no quit style.

A scrum that saw six players in total sent to the penalty box for unsportsmanlike conduct ensued, four from Lynnfield and two from Saugus.

“I thought the ref handled everything right, they put an end to it,” said Papagni.

Saugus got its lone second half goal in the third quarter while on the power-play but really had no answer for the Lynnfield attack when the sides were at even strength.

With the score 16-2 after three quarters the game was all wrapped up. The Pioneers tacked on a couple goals for good measure in the fourth to bring the final score to 18-2.

“We’re in a nice spot right now,” the coach said. “It’ll be nice to go to Mystic Valley, take care of business and then we have the #1 seed Ipswich. Fun times. We’re peaking at the right time, we’re on a 12 game win streak.”