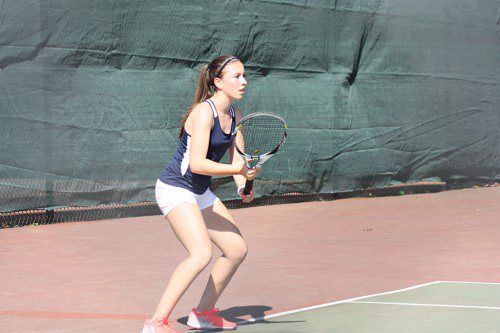 LYNNFIELD — The girls’ tennis team has been hard at work on its quest to repeat as Division 3 state champions for the first time since 1999.

“Tourney time is what we look forward to each season,” said Pioneers head coach Craig Stone. “Hopefully, the matches will bring out our best tennis and a lot of fans.”

While the Pioneers are looking forward to beginning its quest to repeat as Division 3 sectional and state champions, Stone said the locals are “trying not to look too far ahead.”

“We are taking it one match at a time,” said Stone.

The Pioneers started preparing for the state tournament last week by scrimmaging Winchester, one of the top Division II North teams. The locals also scrimmaged the Lynnfield High boys’ tennis team. Additionally, the Pioneers have been fine tuning their skills during practices.

“We are trying to stay sharp and focused during practices,” said Stone. “(We are) continuing to try to challenge each player to journey out of their comfort zone with strokes or strategies.”

Stone said the first doubles team of junior Olivia Skelley and sophomore Katie Nevils has “matured into a very formidable duo.” The Pioneers’ second doubles rotation has been shared by four players. Senior Rachel Maglio and junior Amanda Stelman will serve as one second doubles pair, while sophomores Katie Nugent and Camie Foley will serve as the other pair.

The MIAA unveiled the Division 3 North brackets on Tuesday, June 2, taking place after the Villager went to press. Stone said the tournament will officially begin on June 4 and the Pioneers will most likely receive a bye in the quarterfinals.

Stone said the “top teams” in the North section are North Reading, Manchester-Essex, Austin Prep and Swampscott, all of whom the locals defeated this season. Lynnfield defeated Swampscott 3-2 in the Division 3 North finals last year.

“There are a few teams with outstanding records that we have not seen such as Notre Dame of Tyngsboro, Lowell Catholic and Bishop Fenwick,” Stone added. “If we are fortunate to win the North, Cohasset, Ursuline and Dover- Sherborn from the South are tough.”