Little League Round Up 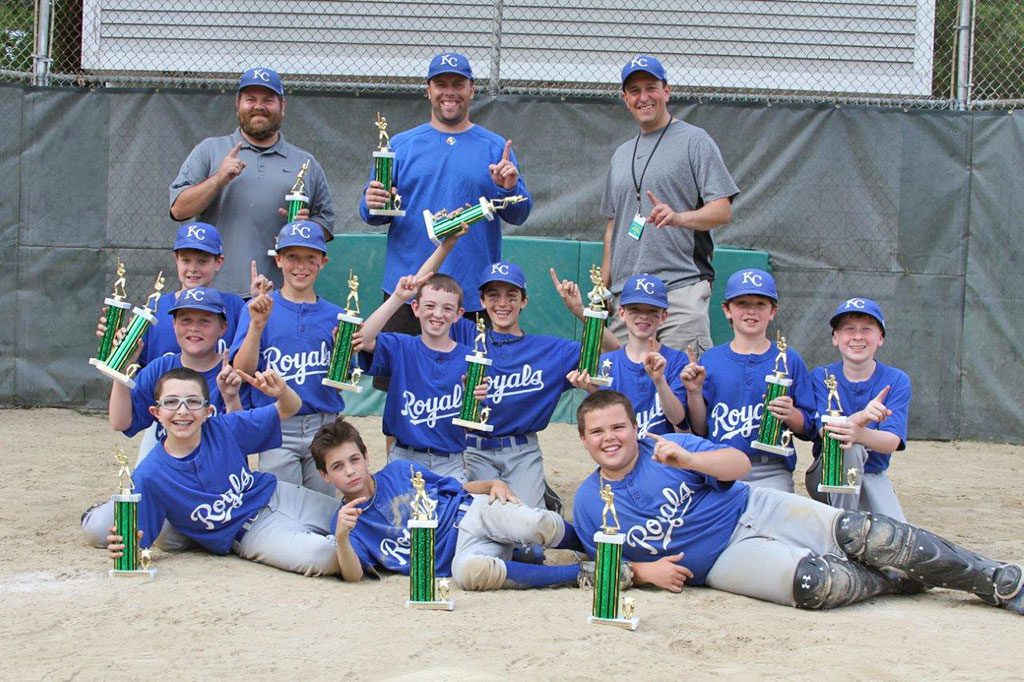 ROYALS NOT BLUE. The North Reading Little League Royals pose with their championship trophies after defeating the Angels on Saturday afternoon for the Majors title. The series, featuring the league’s top two teams from the regular season, went three games, with the Royals taking the decisive Game 3 by a 5-1 count. (Courtesy Photo)

NORTH READING — Benevento Fields were alive with the excitement of playoff baseball last weekend as North Reading Little League capped its spring season by crowning champions in the Majors, Minors, and Farm divisions. More baseball remains on tap, however, as the NRLL/Tim Chaloux 12–year–old Appreciation Game has been moved to this Friday and the various all-star teams are about to begin tournament play.

Here’s a recap of the championship action:

In a very well played series, the Royals edged the Angels in three games to claim the 2015 NRLL Majors title. It marked the third straight year it’s taken three games to determine the Majors champion.

All spring, the Royals followed the three basic principles of baseball: pitching, defense, and timely hitting. Never was this more evident than in Game 1 of the series. Trailing 2-0 heading into the bottom of the fifth inning, Chris Mangano drove home the game-winning runs with a two-out bases-clearing triple that staked the Royals to a 3-2 lead. Nick Ciardiello then knocked in an insurance run to account for the 4-2 final. Nick Shea pitched two scoreless innings to pick up the win, while Andrew Peppe, Zach Micciche, and Nick Rinaldi contributed great defensive plays to help stall various Angels rallies.

In Game 2, held Saturday afternoon, the Angels came storming back to tie the series with an 11-9 victory. Solid pitching by Frank Trischetta and Sal Schille kept the Royals off-balance. Defensively, the Angels received big plays from Jared Macdonald and Jackson Dorrington, while Anthony Juliano was stellar behind the plate. Offensively, Sam Elliott, Trischitta, and Michael Dee paced the Angels attack. Ryan Caviasca, Demetri Andrellos, and Michael Vittozzi all had hits for the Royals.

Game 3 followed and saw the Royals get crowned champs by virtue of their 5-1 victory. Mangano fired a 59-pitch complete game to lead the way. Clutch defensive plays by Vittozzi, Jake DiNapoli, Shea and Joey Caviasca help keep a potent Angels lineup in check. The team’s unsung hero, however, was James Brooks, who caught both ends of the doubleheader and led the offense with four hits on the day.

The Dodgers scored the game-winning run in the bottom of the sixth inning to edge the Royals, 13-12, for the Farm League championship, while the Iron Birds staved off the River Bandits, 10-7, to take the Minors title.

The Mariners took home NRLL Junior Division honors with a pair of playoff victories. In the semifinals, Matthew Capozzoli went the distance on the mound, striking out eight to lead an 11-1 win over the Rays. Ryan Babcock reached base three times and scored three runs, and also made two stellar defensive plays to limit the Rays in the third inning, one of those a circus catch off a long drive by Sean McCullough. Good defense also ended the fourth when a diving grab by Chris Gwozdz at first base led to an inning-ending double play. Ryan Landers swatted a bases-clearing three-run triple in the first inning, while Alex D’Ambrosio launched a two-run home run in the second.

In the title game, held at the Hood School, the Mariners jumped ahead early – scoring 11 times in the first frame – and coasted to a 15-2 decision over the Yankees. D’Ambrosio went the distance on the mound, striking out four and scattering three hits, supported behind the plate by Daniel Lignos. Derek Donovan, Zach Rinaldi, and Brett Clark all had big at-bats with two outs in the first to contribute to the early rally. Max Dorrington’s diving stab of a line drive off the bat of Dylan Babcock was a key defensive play for the Yankees. D’Ambrosio contributed a three-run home run for the Mariners.

Although the Mariners subsequently fell to the Woburn Royals in the Middlesex Big Diamond League playoffs, the Big Diamond season continues as the 13/14-year-old All-Star Team hosts Stoneham on Saturday at NRHS’s Carey Park (2 p.m. start).

The NRLL/Tim Chaloux 12-Year-Old Appreciation Game was postponed on Sunday due to inclement weather and will be played tomorrow at Benevento Memorial Park, starting at 5:45 p.m. More than 40 players are signed up for the game, which is NRLL’s way of thanking its 12-year-old players who will be moving onto the Big Diamond while also honoring the memory of former NRLL standout Tim Chaloux.

The Jimmy Fund Summer League is about to begin and teams are filling up, but there’s still time to register. North Reading fields teams in the 8/9, 9/10, and 11/12 age divisions, who play an 8-9 game schedule against surrounding towns starting in early July. Most of the games are on weeknights. Those interested in playing should sign up ASAP through the www.nrll.org website.