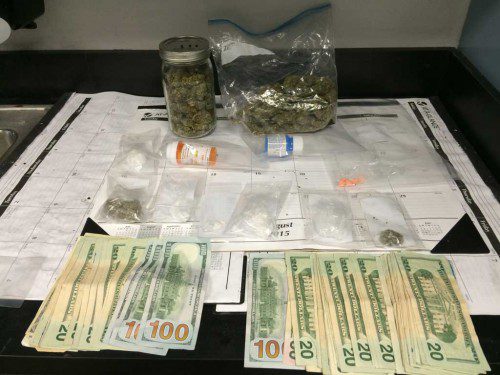 CASH AND A variety of drugs including marijuana and cocaine were seized by police during a bust Friday afternoon.

WAKEFIELD — A 43-year-old Kendrick Road man was arrested at about 4 p.m. on Friday on multiple drug charges including intent to distribute.

Wakefield Police detectives had Anthony Lacava under surveillance for a period of time before obtaining a search warrant for his vehicle and residence. Late on Friday afternoon, local detectives along with area detectives from the regional Drug Task Force observed a white male enter the passenger seat of Lacava’s 2000 Honda Accord while parked on New Salem Street. The man stayed for about a minute before exiting the vehicle.

Believing a drug sale had occurred, two detectives spoke to the man who exited the vehicle while other members of the task force stopped Lacava’s car at the corner of New Salem and Vernon streets. According to police, Lacava refused commands to exit the vehicle. Once police managed to get him out of the car he would not comply with orders to get on the ground or any other commands, police said. He was advised by an area detective multiple times that he would be Tazed if he continued to resist. He was ultimately Tazed and taken into custody.

Police said that Lacava was given routine medical attention at Melrose-Wakefield Hospital after being Tazed and was then returned to police headquarters for booking.

Earlier on Friday afternoon, police received a report of two white males attempting entice a 10-year-old girl into their vehicle. The girl said that she was  on Chestnut Street walking toward the square when a brown four-door sedan, possible a Hyundai, pulled up. The passenger asked the girl if she needed a ride home and then exited the vehicle. At that point the girl said that she ran away.

The man who exited the vehicle was described by the girl as being a white male, approximately 30-40 years old with stubble on his face, wearing sunglasses and a multi-colored baseball cap. He was also described as having a tattoo on his lower right leg.

Police were unable to locate the vehicle but put out an alert to area police departments to be on the lookout.

At about 7 p.m. on Friday, a caller reported to police that a female was walking in and out of traffic on Main Street. Police said that the woman was able to make it to her residence on her own.

A caller on Audubon Road reported that he was concerned about tire theft after he observed three men kneeling near his vehicle. The men told police that they were taking pictures.

No serious injuries were reported after an operator of a 2005 Toyota Camry lost control of the vehicle and struck a utility pole on Pleasant Street just after midnight on Saturday morning. There was no visible damage to the pole but the vehicle was towed from the scene. The woman was was transported to Melrose-Wakefield Hospital with minor injuries.

A Stoneham man will be summonsed to court on charges of unsafe operation and operating with a suspended license after police stopped his Moped at about 11 a.m. on Saturday at Broadway and Foundry streets.

At about 4 p.m. on Saturday, police responded to a report of youths throwing water balloons at cars on Salem Street. Police spoke to the youths about their activities and sent them on their way.

Police responded to a Pleasant Street address at about 6:20 p.m. Saturday after a resident reported a neighbor having a party and the guests urinating in the yard. The revelers agreed to move the party inside for the night.

A Cedar Street man was arrested on an open container violation just before 6:30 p.m. on Saturday.

At about 7:15 p.m Saturday, police responded to reports of a man yelling and screaming at people in the Square. Police spoke to the man and sent him on his way.

A caller reported what he believed might be gun shots in the vicinity of Greenwood Avenue and Edmunds Place just before 10 p.m. on Saturday. A neighbor said that they were fireworks. Police were not able to locate the source of the noise.

Police were called to the scene of a possible domestic disturbance at Main and Avon streets at about 10 p.m. Saturday. The parties involved were advised of their rights and sent on their way.

Just before 10:30 p.m., a caller on Chestnut Street reported finding a barefoot, 2-year-old child wearing Spiderman pajamas in front of her house. The child was reunited with her parents at another Chestnut Street address.

A woman was transported to Lahey Clinic by Action Ambulance following a car accident at about 12:40 p.m. on Sunday at North Avenue and Wolcott Street.

Just before 11 p.m. on Sunday, police received a report of a man in his 30s wearing a backpack in the middle of Main Street staring into passing vehicles. Police checked the area but were unable to locate the man.