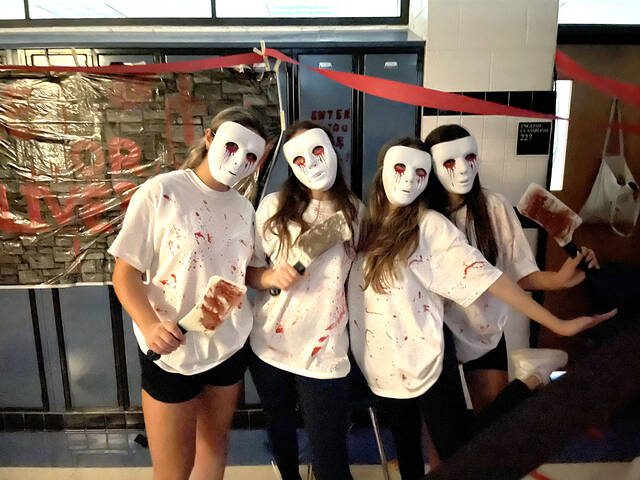 A GROUP OF GIRLS dressed up as characters from “The Purge” during Haunted High School on Oct. 24. (Dan Tomasello Photo)

Eight-hundred-and-seventy-five people came together to get scared and have some laughs during Haunted High School’s return on Sunday, Oct. 24. The biannual fundraiser’s proceeds will be donated to the Lynnfield High School Class of 2023.

“The kids did an awesome job,” said high school social studies teacher Jen Goguen, who is the Class of 2023’s co-advisor. “It’s awesome being able to do something so great for the community this year.”

“The kids have been fabulous,” said LaMonica. “We have been working on this for a month, and the high school kids were really excited about it. They wanted to do something great for the little kids. It’s awesome.”

“It has been a lot of fun,” said Perkins. “It’s great that we were able to bring it back for the community. It’s an awesome fundraiser for the junior class and a great part of students’ high school experience. It’s a fun family event for the entire community. Community Schools is thrilled to be a part of it.” 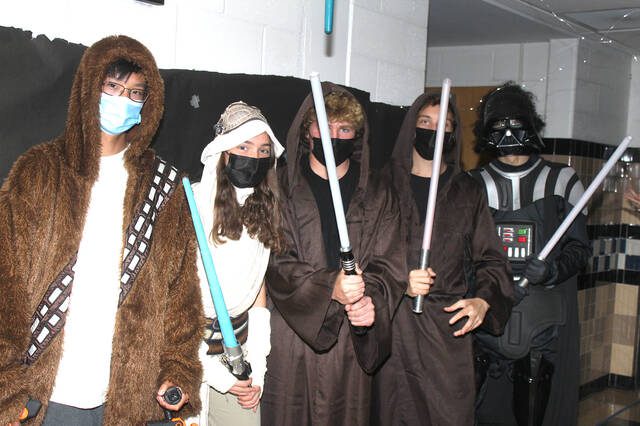 THE FORCE WAS STRONG with seniors, from left, Jason Yang, Kaleigh Weeks, Shane McQueen, David Kasdon and Ben Blacker as they dressed up as characters from the iconic “Star Wars” trilogy during Haunted High School on Oct. 24. (Dan Tomasello Photo)

There was a large line of people eagerly waiting to get spooked when Haunted High School opened its doors at 4 p.m. and the event remained busy until the doors closed. A number of children wore their Halloween costumes to the fundraiser.

In order to transform Lynnfield High into a haunted house, students started decorating the hallways at 8:30 a.m. The hallways were transformed into scary and happy areas.

“Families could decide if they just wanted to enjoy the happy rooms or do both,” said Goguen. “The fundraiser was designed all for ages.”

“The scary hallways were terrifying,” said Perkins. “I wouldn’t hire Haunted Hospital’s doctors to be my own.” 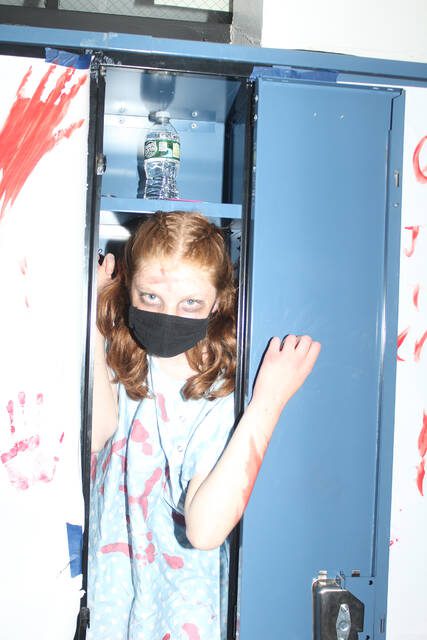 “The happy rooms were a lot of fun,” said Perkins.

Goguen said the high school students used a lot of creativity when decorating the hallways.

“The kids did an awesome job,” said Goguen. “The kids came prepared, decorated themselves and created their costumes. They were very creative.”

“The kids were very creative,” said LaMonica. “We had a variety of rooms this year. We had 10 happy rooms and 10 scary rooms. It’s great so many students volunteered to be part of the fundraiser.”

High School Principal Bob Cleary said all of the student and staff volunteers did a great job resurrecting Haunted High School from the dead.

“It’s awesome,” said Cleary. “It’s a fun night and the kids did a great job. The advisors did a great job helping the kids, and the turnout from the community has been great. Haunted High School is always a lot of fun.”

“It’s a great fundraiser,” said McQueen. “Everyone who organized it behind the scenes and all of the kids who volunteered did a fantastic job. It’s nice being able to hold events like this again. I hope everyone had fun.”

Goguen recalled that the LHS PTO organized Haunted High School for a number of years before it went dormant.

“The Class of 2021 brought it back two years ago,” said Goguen. “It has been awesome collaborating with Lynnfield Community Schools. It has been great working with them.”

“There are high school students who enjoyed coming to Haunted High School when they were young and a lot of parents in the community also participated in the fundraiser when they were in high school,” said Perkins. “People are thrilled to see it come back.”

“A lot of support was needed to make an event like this happen,” said LaMonica. “It went very smoothly.”

“We also want to thank the community for coming out and supporting Haunted High School,” added Goguen.