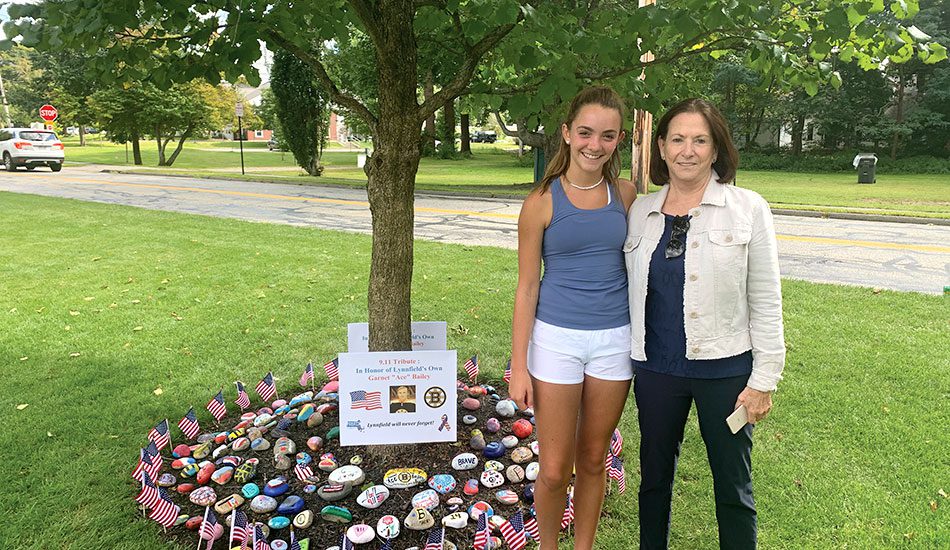 Local high school freshman Paige Martino recently created a tribute stone garden in honor of Bailey, who passed away at the age of 53 after United Airlines Flight 175 crashed into the South Tower of the World Trade Center during the Sept. 11, 2001 terrorist attacks.

“I knew the 20th anniversary of the 9/11 attacks were this year, and I wanted to honor and pay tribute to the fallen heroes who lost their lives on that tragic day,” said Martino.

Martino served as Lynnfield Middle School’s Project 351 ambassador while she was in eighth grade last year.

“Project 351 is a youth group of chosen Massachusetts eighth-graders who over a year’s time are being taught about the importance of volunteerism by leaders such as Gov. Charlie Baker and First Lady of Massachusetts Lauren Baker,” said Martino. “This month’s community service project involved creating a 9/11 tribute service project. Project 351 had had many options for us to pick from. The project from their provided list that appealed to me the most was the creation of a tribute stone garden, which would honor a fallen victim from the attacks.”

After Martino learned about Bailey, she decided to create the tribute stone garden in order to honor the late Ivanhoe Drive resident, Boston Bruins left wing and Los Angeles Kings’ director of scouting.

“Ace was a Bruins legend,” said Martino. “He was a big supporter of children’s charities and was loved by all who knew him. Once I heard about his legacy and love of children, I knew I had to pay tribute to him through the garden.”

In order to create the garden, Martino reached out to 20 friends in order to help her paint the stones. She said local resident Diane Courtney and Girl Scout Troop 82559, which is comprised of current eighth-graders, painted over 30 stones for the garden.

“One-hundred-and-twenty-five stones were beautifully painted with words such as hope, love and peace,” said Martino. “It was an honor to recognize Mr. Bailey’s memory and legacy with this peaceful garden.”

A number of residents took pictures of the stone garden that was placed around a tree at the Town Common during First Responders Day earlier this month. When Martino went back to the Common a few hours after First Responders Day ended, she had a “chance meeting” with Bailey’s widow, Kathy.

“I had gone back to the Common to clean up and noticed a woman sitting alone on a garden bench nearby,” said Martino. “She approached me and asked me if I knew who was responsible for making this memorial. I introduced myself and said I was the organizer of the garden. She smiled, hugged me and said her name was Kathy Bailey. She informed me that she had been sitting on the bench for a couple of hours admiring the tribute and reflecting on Ace’s beautiful life. I was so touched by her OVERSET FOLLOWS:presence and gratitude. We talked on the Common for over an hour, and she shared with me her husband’s story, his love of hockey and his love of family and children. I learned through our conversation that her husband’s legacy continues to live on at Ace’s Place, a children’s playroom at Tufts Medical Center in Boston. Kathy frequently visits Ace’s Place to make sure that this play space is filled with new toys and makes sure that the space lives up to Ace’s standards. Our meeting each other was very magical moment and an encounter I will never forget.”

Martino said her work with Project 351 has taught her a number of important life lessons.

“I learned so many valuable lessons through my work with Project 351, especially the importance of community, unity and serving with compassion,” said Martino.

“I’d also like to thank Diane Courtney, her troop, and my friends and family who contributed over 125 rocks to the garden,” said Martino. “I would also like to give a special thanks to former Select Board member Chris Barrett and Assistant Town Administrator Bob Curtin for supporting my initiative.”

Barrett told the Villager that he is a friend of Martino’s mom, Stephanie. He told them what steps Paige needed to take in order to have the town approve the garden.

“Paige is a sweetheart of a kid,” said Barrett. “It was a wonderful tribute to Ace and a beautiful display. Ace was a larger than life individual and was a tremendous man. When you look at the current discourse at the local, state and national level, Paige is a wonderful example of how children give us hope for the future.”