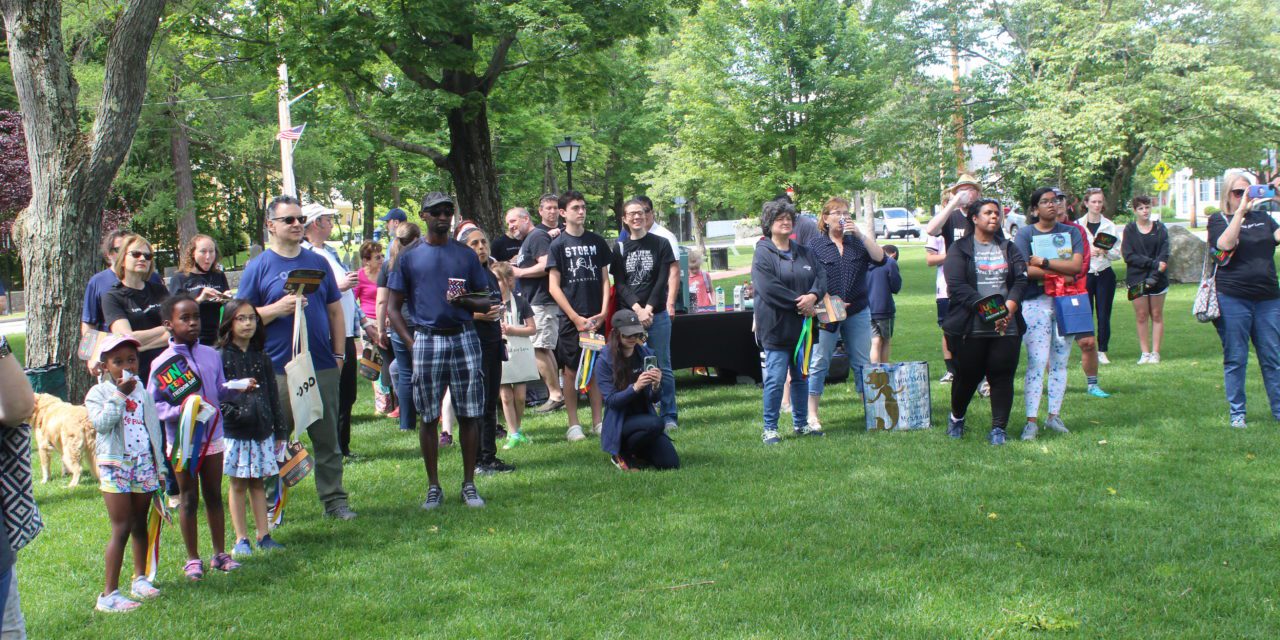 OVER 70 residents attended the Juneteenth Ceremony and Opal Lee Walk on the Town Common on Saturday, June 18. (Dan Tomasello Photo)

Lynnfield for Love organized the Juneteenth Opal Lee Ceremony and Walk to commemorate the emancipation of enslaved Black Americans. Over 70 residents attended the ceremony and walk.

Before the walk began at Lynnfield Middle School, Lynnfield for Love Treasurer Wendy Dixon said the ceremony and walk to the Common sought to honor Lee, a 95-year-old retired American teacher, counselor and activist, who is known as the “grandmother of Juneteenth.” Dixon recalled that President Joe Biden signed a bill into law on June 17, 2021 that made Juneteenth the 11th federal holiday.

“Opal Lee was an honored guest at the occasion after she campaigned for decades to make Juneteenth a federal holiday,” said Dixon. “She promoted the idea by undertaking two-and-a-half mile walks to represent each year it took for the news of the Emancipation Proclamation to reach Texas, which is when the enslaved people of Texas knew they were free. Without Opal Lee, Juneteenth would not have become a nationally recognized federal holiday.”

After attendees arrived on the Town Common, State Sen. Brendan Crighton (D-Lynn) read the Juneteenth Proclamation that was recently approved by the Select Board. He recalled that he was not aware of Juneteenth until a friend of his, North Shore Juneteenth Association founder Nicole McClain, told him about a celebration in Lynn that commemorated the holiday 10 years ago. 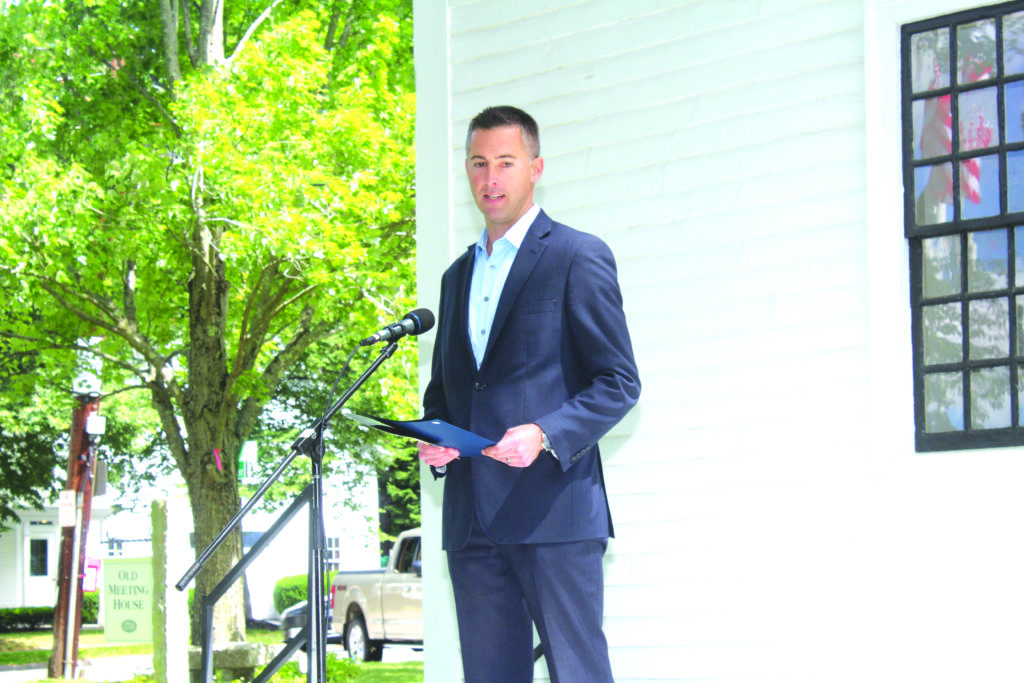 “It was all new to me because I never heard of Juneteenth,” said Crighton. “I never learned about the history of Juneteenth when I was in school. I studied government and history in college, and I learned about the Civil War, Reconstruction and the Civil Rights movement, but I did not learn about Juneteenth. It wasn’t until an organization led by the people raised awareness about it. That has helped people start to wake up and pay attention.”

While Crighton noted that Juneteenth became a federal holiday last year, he recalled that the State Legislature approved making Juneteenth a state holiday two years ago.

“I wish we had done it sooner, but we never would have done it if it weren’t for people speaking up,” said Crighton. “It’s rare for government to make a change on its own, and we need to make our voices heard if we want to bring about change.”

“We live in a time where people are trying to pull us apart,” said Crighton. “That is why coming together like this is so important.”

“Juneteenth has been celebrated since 1865 by African Americans with festivals, reunions and gatherings like this one today,” said Vogel.

While Vogel noted that Juneteenth is a federal holiday, she said only 24 states, including Massachusetts, have made it a paid holiday.

Vogel, who is a former social studies teacher, gave a history lesson about the end of slavery. She said slavery began in the United States in 1619 and did not end until the 13th Amendment was passed in December 1865.

“From 1619 to 1865, there were many slaves who fought against their owners and slavery,” said Vogel. “We know that slaves destroyed tools, crops and escaped on their own or on the Underground Railroad. The atrocities of slavery were brought to the forefront of the United States by the Abolitionist movement in the 1830s. In fact, this movement began in Massachusetts with William Lloyd Garrison and Frederick Douglas, a free Black man who escaped from slavery.”

Vogel said the awareness Douglas and the Abolitionist movement raised “convinced many in this country that it was time to end the institution of slavery.”

“This created a divide in the country between people who believed slaves should be freed by ending slavery, and those who wanted to preserve their way of life, which included the institution of slavery,” said Vogel. 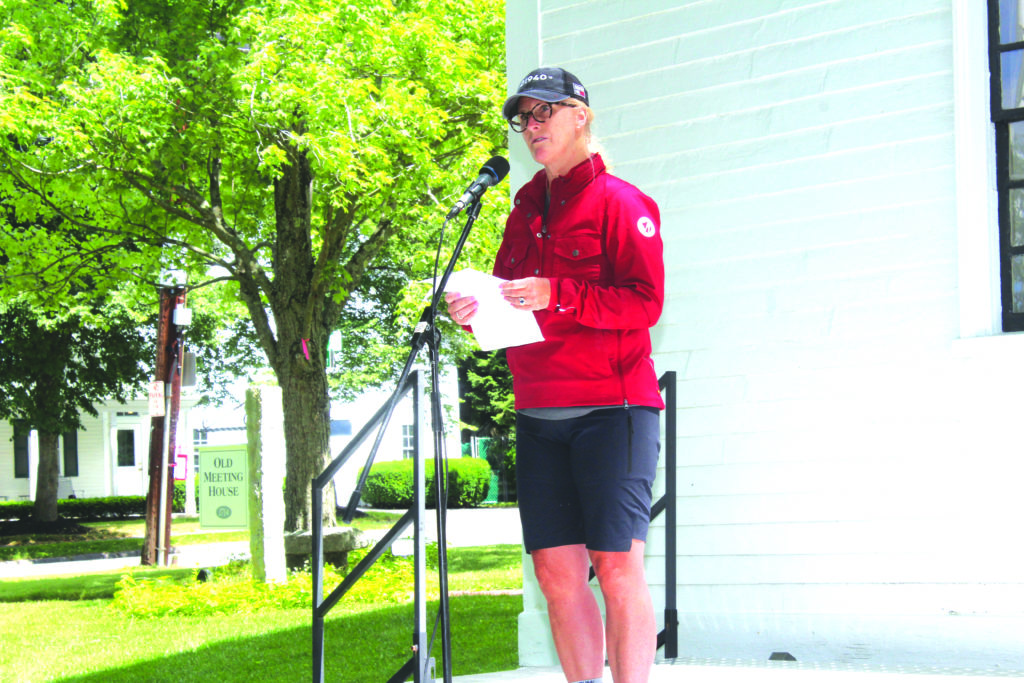 After Abraham Lincoln was elected as the United States’ 16th president in November 1860, Vogel said the Southern states believed he was an abolitionist who was going to end slavery immediately.

“It is important to note that Lincoln was not an abolitionist,” said Vogel. “In fact, Lincoln believed in the gradual Emancipation and did not believe in the immediate Emancipation that the Abolitionists believed in. In fact, Frederick Douglas was critical of Lincoln, believing he needed to address slavery and call for its end in his inaugural speech in 1861, which Lincoln did not.”

Vogel said Lincoln’s election led to seven Southern states seceding from the Union and forming the Confederate States of America. She recalled that the Civil War began at the Battle of Fort Sumter in South Carolina on April 12, 1861.

“Until 1862, Lincoln’s focus was to preserve the Union and bring the Southern states back into the Union,” said Vogel. “However, the Union Army lost many battles during those first two years. In 1862, Lincoln began drafting the Emancipation Proclamation. In September 1862, Lincoln sent a decree to the rebelling states saying that if they did not return to the Union by Jan. 1, 1863, he would free all of the slaves in the rebelling states. Not a single Southern state took Lincoln up on his offer, which was not surprising. As a result, the Emancipation Proclamation was issued on Jan. 1, 1863. Lincoln knew the Southern states would not comply with his proclamation, and slave owners would not free their slaves.”

Vogel said the Emancipation Proclamation helped the Union and its soldiers understand why they were fighting the Civil War.

“They were fighting for the foundational freedoms of all people established in the Declaration of Independence,” said Vogel.

Vogel also recalled that the Emancipation Proclamation allowed Black soldiers to fight for the Union. She said the Union’s victory in the Battle of Gettysburg in July 1863 resulted in the Civil War turning in the Union’s favor.

“It took the Union victory in 1865 to officially end slavery in the United States,” said Vogel. “It was two-and-a-half years after the Emancipation Proclamation was issued. However, it was not legally ended until the passage of the 13th Amendment. We celebrate Juneteenth because it took until June 19, 1865 for news of the ending of the war and slavery to reach Texas, which was one of the original seven states to secede from the Union. The slaves in Texas did not know about the Emancipation Proclamation and the Union victory in April 1865. The first Juneteenth celebration took place in Galveston, Texas in 1865. Today is our first Juneteenth celebration in Lynnfield.” 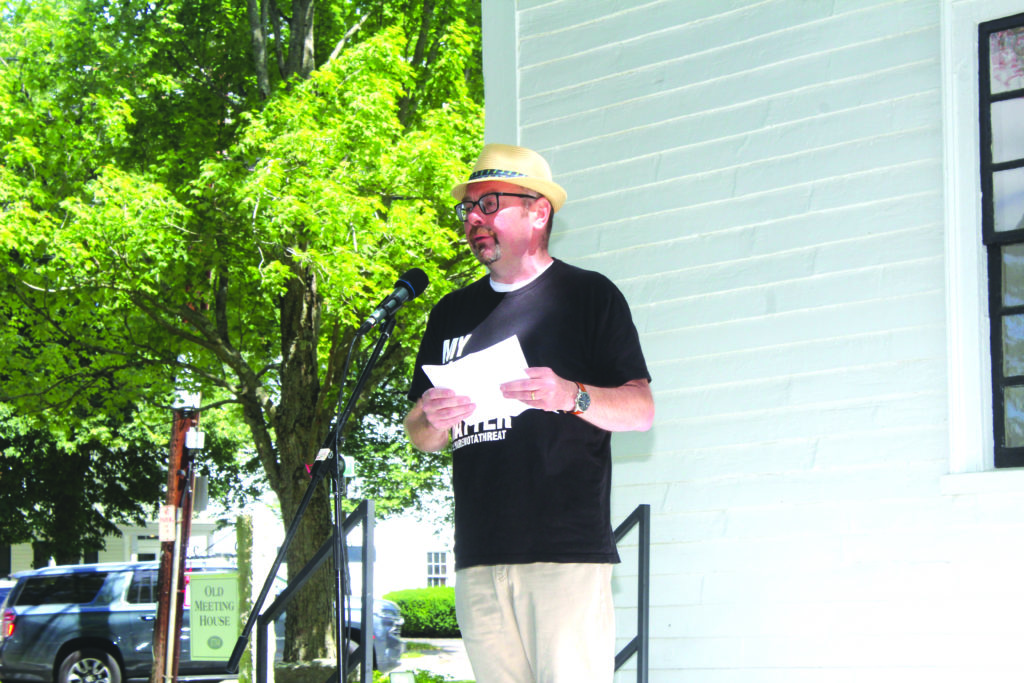 School Committee member Phil McQueen began his speech with a question for the Juneteenth ceremony’s attendees.

“What do I, a 52-year-old white man from Britain who now lives in a not particularly diverse, but thankfully becoming more so, suburban community north of Boston have to say about Juneteenth?” McQueen asked. “What do I bring to the discussion? Nothing. I am the embodiment of white privilege. I have no perspective to add to Juneteenth. But I can listen, I can read, I can learn and I can share. I’ve been listening, reading, learning and sharing a lot over the last few years, and having a lot of conversations with friends, colleagues and, most importantly, the majority of Black and Brown students I serve as an educator in Lynn. Talking about race and racism is difficult, but we must lean into and engage in these challenging conversations if we are ever going to get better.”

“I feel like a lot of people get an opportunity to try to take away another person’s dignity by saying certain things and having no accountability required,” said McQueen. “One of the biggest issues in our country is those who are causing the harm are also dictating what racism is. So, here are six phrases to avoid using in conversations about race:

McQueen urged the Juneteenth Ceremony’s attendees to be empathetic.

“Hart says empathy should be at the foundation of whatever you say,” said McQueen. “‘When we are able to have courageous conversations,’ she says, ‘we are able to be courageous listeners and hear each other out.’”

McQueen also read several quotes from Civil Rights leaders, politicians, authors and activists that “resound most as we gather here and reflect on Juneteenth.”

“No one is born hating another person because of the color of his skin, or his background or his religion,” said McQueen while quoting late South African President Nelson Mandela. “People must learn to hate, and if they can learn to hate, they can be taught to love, for love comes more naturally to the human heart than its opposite.”

After Crighton, Vogel and McQueen concluded their respective speeches, Lynnfield for Love Vice President Sadaf Weisenfeld and Lynnfield Middle School eighth-grader Sonia Kumar gave them a children’s book about Opal Lee. The ceremony’s attendees gave all three speakers a round of applause.

The Juneteenth Opal Lee Walk also included a story walk that featured signs that gave a history lesson about Juneteenth and Lee. Coffee and refreshments were also served, and a group of children participated in a read-a-loud.