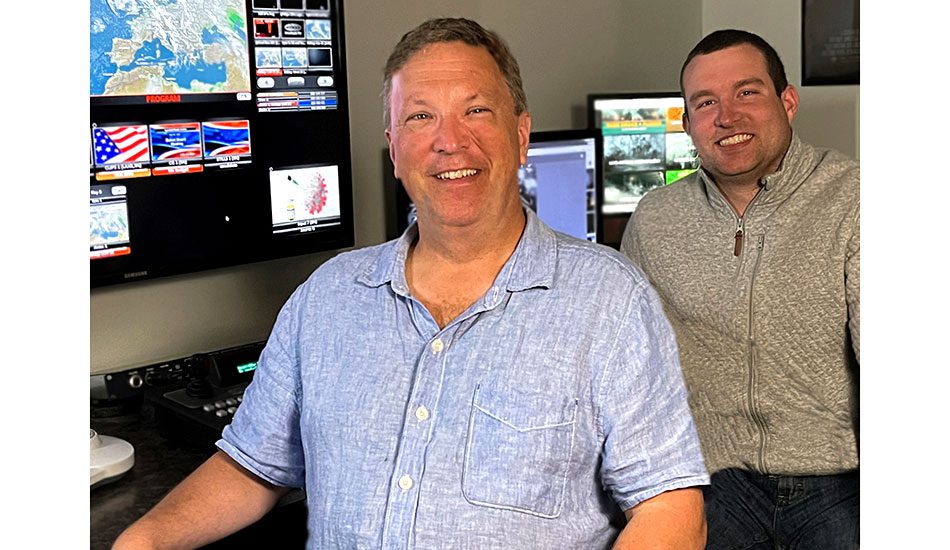 LYNNFIELD — The town’s public access television station is making a difference in the community.

Lynnfield Media Studios Executive Director Eric Hamlin and Production Assistant Drew Sanborn are the dynamic duo behind Lynnfield’s public access television station. After the state implemented the stay-at-home advisory due to the COVID-19 pandemic in March 2020, Hamlin and Sanborn worked closely with town officials to inform the public about what was going on in the community.

“We produced 185 videos during the pandemic,” said Hamlin. “We were way busier during COVID than we normally are. We filmed, edited and produced COVID updates with Town Administrator Rob Dolan and Fire Chief/Emergency Management Director Glenn Davis on a weekly basis. We also did graduations, Town Meetings and the virtual Memorial Day and Veterans’ Day ceremonies. We produced a whole series of programs for A Healthy Lynnfield. We did the ‘Mask Up Lynnfield’ campaign videos and virtual art shows from the Lynnfield Art Guild. We also did A Night of Hope, ‘Town Talk with Town Administrator Rob Dolan’ episodes and filmed local government meetings such as School Committee and Select Board. We became a lifeline for Lynnfield because we were able to give the community updates about what was going on in town.”

“It was a little bit scary because none of the public access stations ever did anything like this, including Lynnfield Media Studios,” said Hamlin. “My son, Tyler, helped us out. We rewired the whole studio so that we could take the signal back to my house and shoot it back to the studio. We used all of the switchers remotely and then pumped it out to Comcast and Verizon. We also posted programs on the Vimeo page.”

“We really stepped up and got the information out there in a relatively fast time,” said Hamlin. “Town Administrator Rob Dolan would sometimes come to me and say he needed to get the information out ASAP. We would do the show virtually, and then I would edit it real quick and get it on the air. It would then be on for a 24-hour loop on Comcast and Verizon. The turnaround times were insane.”

Hamlin is proud of the virtual Memorial Day and Veterans’ Day ceremonies that he and Sanborn created.

Sanborn’s role as Lynnfield Media Studios’ production assistant involves him filming and editing events around town such as A Night of Hope, Lynnfield Rotary’s Concerts on the Common, Lynnfield High School athletic teams and seminars such as “Hobbies with Bob MacKendrick” at the Senior Center. He also acts as the station’s camera operator and audio director during live studio and broadcast events.

“I have done a lot of filming, editing, pre-production and post-production work before COVID and during COVID,” said Sanborn. “I have been taking nature shots around town. I was still doing that during the stay-at-home order. I did whatever Eric needed me to do.”

Hamlin has worked in the video production business for the past 36 years. While attending the Art Institute of Pittsburgh, Hamlin worked as a photojournalist for a newspaper and produced local programming for a community access station.

After graduating from college, Hamlin started working for a large advertising company in Pittsburgh in the 1980s, where he shot, edited and produced local television commercials. He later relocated to Orlando, Florida, and got a job working at SeaWorld. After working in ticket sales for a few years, Hamlin was hired as a theatrical service technician for Shamu Stadium’s Jumbotron system.

“I also provided special effects, lighting and maintenance,” said Hamlin. “I provided assistance for the park’s pyrotechnic displays for hundreds of thousands of guests a year.”

Hamlin was surprised to learn that some of his film footage of the orca shows at SeaWorld appeared in Gabriela Cowperthwaite’s 2013 documentary “Blackfish.” The documentary is about the late killer whale Tilikum, who was responsible for the deaths of three people. “Blackfish” also examines the consequences of keeping orcas in captivity.

“I was watching the documentary when I realized some of the footage they used was my stuff,” said Hamlin. “I don’t know who gave it to the filmmakers.”

Hamlin also worked for Intercept Management Corporation, where he provided lighting, rigging and staging support during concerts for rock bands such as The Beach Boys, Metallica, Rush, George Thorogood, Van Halen and U2.

After Hamlin and his wife moved from Orlando to Massachusetts, he worked as the senior videographer for Comcast Spotlight for 13 years.

Hamlin’s freelance work has been broadcast on CNN, Court TV and NBC’s “Dateline” as well as Boston-based news stations such as WBZ, WCVB and New England Cable News.

“After 36 years of professional experience, it was nice to come full circle back to my roots,” said Hamlin. “I started my career in community access television and it felt great being able to lend my expertise to the town of Lynnfield.”

Hamlin recalled that Lynnfield Media Studios’ old headquarters was in a tiny room in Lynnfield High School. He worked with local officials to establish a proper station at MarketStreet Lynnfield, and the Al Merritt Media and Cultural opened its doors in November 2014.

“I really love being the conduit in providing entertaining, informative and vital information to the citizens of Lynnfield via Lynnfield Media Studios’ public, education and government (PEG) channels,” said Hamlin.

“Lynnfield Media Studios has been a great experience for me,” said Sanborn. “It has given me the opportunity to advance my camera and post-production skills plus I think Lynnfield is a great place. I have had the opportunity to meet really nice people.”

Sanborn graduated with a communications degree from Westfield State University in 2016.

“I worked in a TV studio at Westfield State and did a couple of game shows,” said Sanborn. “I took a lot of film classes.”

Sanborn also filmed, edited and produced several documentaries during and after college.

“One of the documentaries was about a boxer named Matt Doherty,” said Sanborn. “I followed him for a week while he was preparing for a big fight. I also did a documentary about a music producer. I also made a documentary about a chemical explosion that happened in Danvers in 2006. That was personal for me because the explosion happened when I was a kid growing up in Danvers. I followed the victims, and reported on what happened and how it happened.”

Sanborn started freelancing as Lynnfield Media Studios’ production assistant in 2017. He became a full-time employee in 2019.

“Drew was a great sport because he was a freelancer for two years,” said Hamlin. “It’s always rough being a freelancer because there is no steady income. He does a fantastic job and he has a great personality. It was a great fit. The residents really like him a lot. I’m thrilled that I was able to bring him on full-time two years ago.”

Hamlin also said Sanborn is a “fantastic” photographer. He said Sanborn took photos of the town’s scenic areas that were used to create video postcards.

“Drew did a great job with those,” said Hamlin.

Hamlin has enjoyed working with Sanborn for the last four years.

“We make a great team,” said Hamlin. “Being a two person crew means that you have to wear multiple hats, troubleshoot and think fast on your feet.”

Hamlin and Sanborn have been spending the summer working on various maintenance projects at the Al Merritt Center. Hamlin said Lynnfield Media Studios is gearing up to start streaming programming this fall.

“We are always investigating and implementing the most recent gear to stay ahead of the curve,” said Hamlin.

Residents can watch Lynnfield Media Studios’ programming on Comcast and Verizon as well as on its town of Lynnfield Vimeo page.