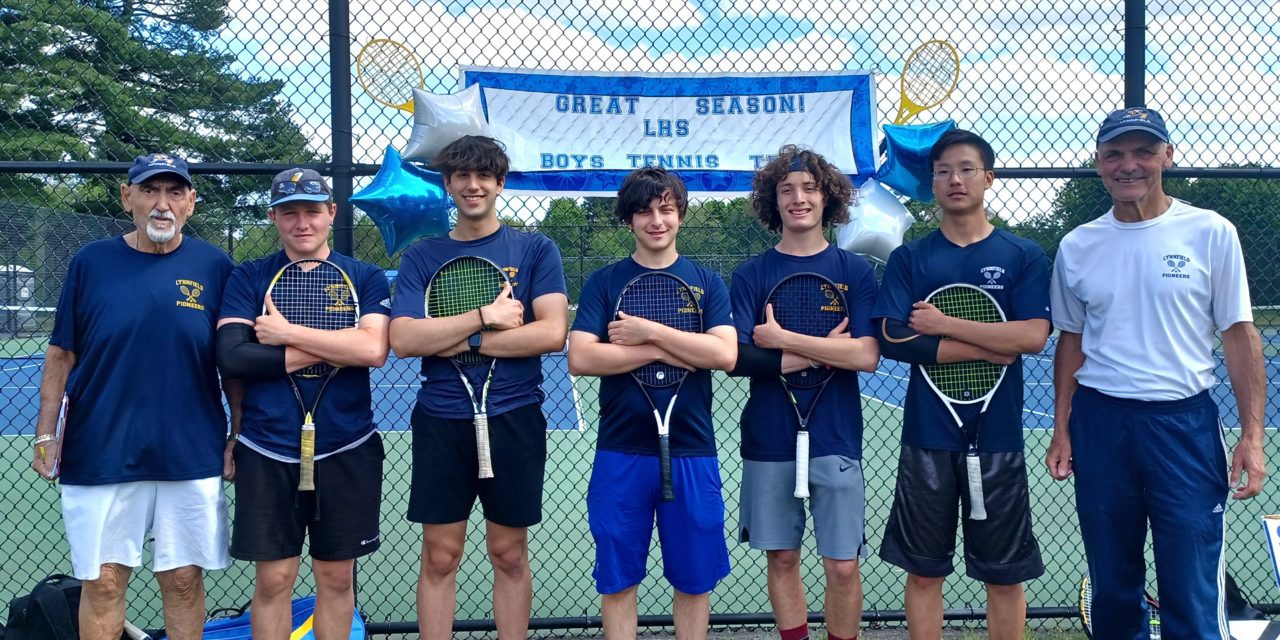 THE SENIORS on the LHS boys’ tennis team were honored before their 5-0 win over Pentucket on May 17. Lynnfield has a 13-match winning streak and is currently ranked 2nd in the state for Div. 4. Pictured from left to right is assistant coach Tony Lena, Shane McQueen, Andrew Scangas, captain Harrison Luba, captain David Kasdon, Jason Yang and head coach Joe Dunn. (Courtesy Photo)

LYNNFIELD — The Lynnfield High boys’ tennis team won its 13th match in a row on May 20 as they shutout host Pentucket 5-0. With that victory, the Pioneers improved to 13-1 overall and 10-0 in the Cape Ann League. Their only loss came to Division 1 St. John’s Prep in the season opener.

In doubles play, the first team of Dave Kasdon and Sahil Akhter won, 6-0, 6-3, while the second pairing of Russell Kasdon and Slate LoPilato won, 6-2, 6-1.

“It was the second time we played them last week so we knew what to expect from them,” said Pioneers head coach Joe Dunn.

On May 18, the Pioneers won, 5-0, at North Reading to complete the season sweep over the Hornets.

Dave Kasdon and Khodr won, with matching 6-1 scores while the second duo of Jason Yang and Brendan Sokop won, 6-1, 6-2.

“It was Brendan’s season debut and I was impressed with the way he went to the net,” said Dunn, about the sophomore.

Lynnfield celebrated a happy Senior Day on May 17 as they blanked guest Pentucket, 5-0, at Lynnfield Middle School.

“It was a nice Senior Day for the kids,” said Dunn as the five LHS 12th-graders were honored before the match.

Lynnfield, who has won the CAL Kinney Division the last four years, will host non-league Masconomet on May 25 in the final match of the regular season at 4:30 p.m.

The week after, the team will find out who are they are hosting in the first round of the Division 4 state tournament as the states are slated to open up on June 2.

In the MIAA power ratings that came out on May 23, the Pioneers are ranked second in Div. 4 behind Weston. The top 32 teams in the power-rankings system automatically qualify for the state tournament.