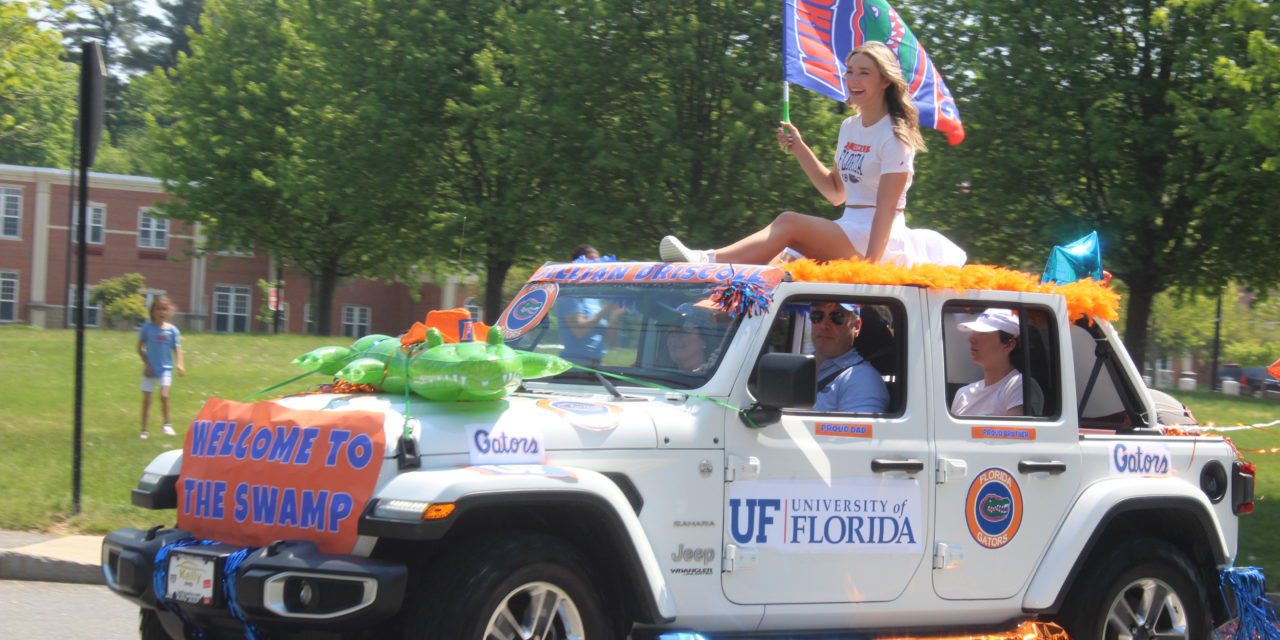 The high school launched the parade in the spring of 2020 to serve as an alternative to the traditional Senior Week events that were canceled after schools across the state were closed due to the COVID-19 pandemic. In the wake of the Parade of Destinations being a huge hit with students, families and the community at-large, LHS officials decided to make the parade a permanent tradition.

“It’s a great event every year,” said High School Assistant Principal Brian Bates. “We started the parade right after COVID began, and it has turned into an awesome new tradition. The parade is a great way for the kids to celebrate their accomplishments and their future.”

School Committee Chair Rich Sjoberg, who helped conduct traffic in the Lynnfield Middle School parking lot at the start of the parade, agreed.

“The best part of today is the kids get to gather to celebrate all of the success they have had at Lynnfield High School,” said Sjoberg. “It’s great seeing the sense of pride they have not only in what they accomplished at Lynnfield High, but their next step in life.”

“Each one of the colleges the seniors are going to is utterly amazing,” said Sjoberg. “It’s a testament to the hard work they put in during high school.”

Miss Massachusetts Teen USA Jillian Driscoll, who is headed to the University of Florida, said the parade was an absolute blast.

“It’s so great to see where everyone is going and what we are going to do in the future,” said Driscoll. “It’s such a fun way to show everyone in town our future plans.”

“It was really exciting,” said McCormack. “It’s great that the high school started the parade. It was a really nice day for a parade.”

Senior Julia Floramo, who will be studying at the Wentworth Institute of Technology this fall, said the LHS Parade of Destinations was “a great memory” that the Class of 2022 will always cherish.

Ava Tardito, who is headed to the University of Delaware, said she is “glad the high school started this tradition.”

“It was super fun,” said Tardito. “I had a great time participating with my friends.”

“It’s great seeing the kids come out and decorate their cars,” said Bates. “The seniors took the ball and ran with it.”

Senior Abby Adamo, who will be studying at Villanova University this fall, said she “loved decorating my car with my friends.”

Bates recalled that the seniors have faced a lot of adversity over the last few years, and the 2021-2022 academic year was no exception.

“When we needed the seniors to step up this year, they did,” said Bates. “It wasn’t easy coming back to a so-called ‘normal year,’ but they stepped up as leaders. They have overcome a lot of adversity the last couple of years. I couldn’t be more proud of them.”

Bates thanked the community for coming out to support the Class of 2022 during the Parade of Destinations.

“The community always comes together for our students, especially the seniors,” said Bates. “It’s great that the community made sure the seniors were sent out with fanfare. There were a ton of families and residents lining the course for the parade. It might be a new tradition, but it’s a tradition that is cherished by the seniors and the community.”

Sjoberg congratulated the Class of 2022’s families as they celebrate the end of the seniors’ Lynnfield High careers.

“There is no better feeling than having pride in your children,” said Sjoberg.