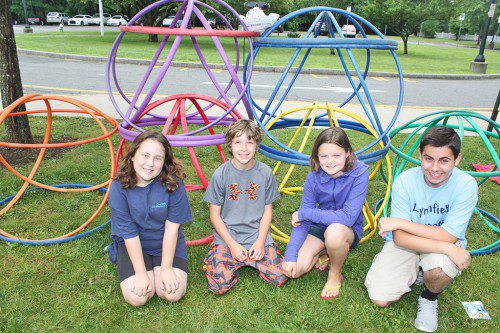 LYNNFIELD — The 2015 season of Lynnfield Recreation Station kicked off on June 29 and this season is quickly shaping up to be one of the greatest on record. This year, many of Lynnfield’s top prospects have made it to the big leagues and are now old enough to come to Big Kid Camp. Most notably are 5-year-olds Kat Palmer and Tess MacDonald. When asked about their first couple of weeks at LRS, both ladies were outspoken.

MacDonald stated, “Living next door to camp over the past five years since my birth but not being able to join in the fun has always been hard. My sisters would leave for camp and I’d have to stay home; total devastation. Now though, I get to be a part of the action and I’m learning quickly where my skill set lies on the field and at the craft table. I think LRS and I are going to have a long, happy relationship!”

Palmer shared in the excitement. “After spending one year in the minors down at Little Kid Camp I was a little nervous about being called up. Thankfully my brother Michael is with me every step of the way to ensure I’m having fun, but more importantly, being safe. My abilities on the tag pastures can get the best of me but Michael takes the necessary precautions to keep me on the safe side of danger.”

This year’s program will be filled with everyone’s favorite playground games, from four square, to tag, to kickball and hula hooping. There will be daily crafts, question of the day, 10:42 Popsicle breaks, and of course, daily trash pickups to keep our park clean. Fun Fridays return this year with everything from tie-dye to waterslides. Stay tuned for future articles so you can stay ahead of the curve.