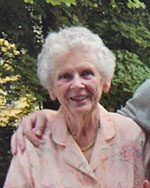 Margaret was born in Melrose on Aug. 1, 1922 to William and Anna (Fahey) Forbes. She was raised in Wakefield and graduated from Wakefield High School.

Margaret went on to marry Charles Spiby and settled in Melrose, where she would live for the rest of her life.

Margaret worked at GE for a number of years, before having her first child; after that she devoted herself to raising her family and running the household. After her husband Charles’ untimely death, Margaret later was remarried to Francis Lucey. The two spent many wonderful years together.

Margaret enjoyed spending time at her campground in New Hampshire, as well as traveling in her and Francis’ RV to Florida as well as to Georgia many times. She even went on a trip to Alaska for a cruise. In addition to her travels around the country, Margaret was an avid reader who enjoyed being around her family.

She loved spending time with her grandchildren and was truly happiest when she was surrounded by family.

Margaret was the loving wife of the late Charles Spiby and the late Francis Lucey. Beloved mother of Peg Kenney and her late husband William of Hudson, Betty Callahan and her husband Tom of Reading and Ellen Randall and her husband Mike of Lilburn, Ga. She was the loving step-mother of Peg Haughn and her late husband John of New Hampshire, Frank Lucey and his wife Sydna of Westboro, Bill Lucey and his wife Guixian of New Hampshire, the late Paul Lucey and his wife Karen of New Hampshire and Anne Lustwerk and her husband Steve of Randolph. She was the dedicated grandmother of Daniel, Jeremy, Lindsay, Kayleigh, Matthew, Kevin, Erin, Katelyn and Emily. She was the loving step-grandmother of Jennifer, the late John, Katie, Jared, Brett, Beth, Eric, Kathleen, Stephanie and Will. Margaret is also survived by many step-great-grandchildren.

Visitation was held at the Gately Funeral Home, 79 West Foster St., Melrose, on Sunday, Sept. 27, from 2 to 5 p.m. A Mass of Christian Burial was held at Most Blessed Sacrament Church, 1155 Main St., Wakefield on Monday, Sept. 28, at 10 a.m. Interment at Wyoming Cemetery, Melrose.

In lieu of flowers contributions can be made in Margaret’s name to the American Cancer Society, P.O. Box 22718, Oklahoma City OK 73123-1718. To leave an online condolence please visit gatelyfh.com.